A day in the life

We got up early. The EDH was on but the house kept losing power, over and over. One pot of coffee was restarted 8 times.

Tina and I went for a quick walk, got ready and headed to the airport. After the airport Troy and I headed up to Hope's class Thanksgiving party. The photo proves Troy had a great time. ;) 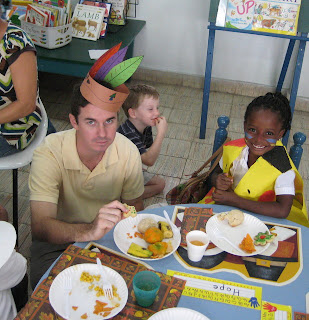 After the party I had a spitting headache and Troy had work to do. I went to bed, he went to the office. The babies were all sleeping. That left Noah and Hope to play nicely and quietly. That plan worked for one of the two... Not hard to guess which one played quietly.

Noah bypassed the full length mirror outside of Paige's bathroom. He wanted to see himself in his Batman mask. He climbed up into the sink. The sink came off the wall and crashing to the floor with Noah in it. The water pipe broke. Noah laid in the center of broken pieces of porcelain with water squirting out of the wall onto him. It was hard to tell which cuts were bad and which were just surface cuts because of the hysteria and blood. He was screaming that he wished he "waaaassss noootttt a kiddd annnymmmmorre". He blamed the entire incident on being a kid. (I am pretty sure it had more to do with being a ding-bat.)

We could not get him to stop screaming enough to ask which cuts hurt the worst. He had six on his hands/arms and two on his legs. After lots of pleading and begging we cleaned him up enough to learn that the hand cuts were not very deep and only one cut on his leg was bad.

Had Jen or Britt been here, they would have forced stitches on him, but the thought of bringing him to a Haitian clinic and having that trauma/drama and screaming seemed like a bad idea. We did our best to close it up and wrap it up. Tomorrow when we clean it there will be much drama again I am sure. I will get a photo for you Jen/Britt ... but you're kind of far away to be much good to us. ;)

Example of sink attached to wall ... not exactly something you'd necessarily want to climb up on to see a mirror. Especially not when you walked by one on the way to the sink. 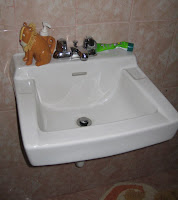 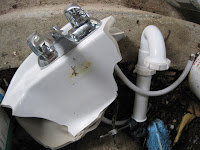 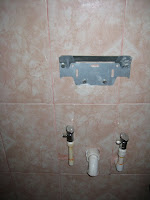 The boy with no common sense... 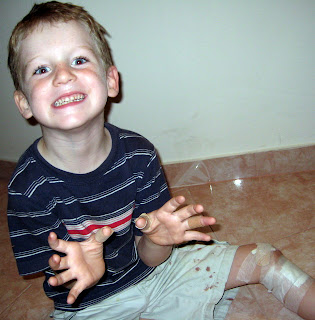 He is pretty sure he needs to "start out" in our bed tonight due to this injury. He is milking it for all it is worth. We're very thankful that the sink was hurt much worse than the boy.
at Tuesday, November 25, 2008