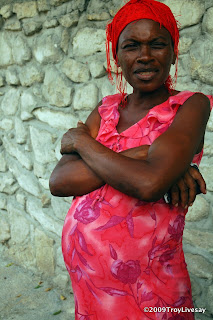 As you know, Thursday is "Prenatal Day" for the Heartline Women's Program. I really like Thursdays because I feel like I have a better handle on the names and faces of the ladies that come on Thursday.

I have started handling the updating of files and that helps me to commit each lady and her information to memory. We've recently had about 8 new ladies join us as 8 have had their babies and moved onto the early childhood development class on Tuesdays.

Each Thursday the ladies filter in from about 11:30 until 12:30. As they arrive we get their blood pressure, their weight and their temperature. Every once in a while something will be way off with one of those stats and we'll know to dig a little deeper.

In the USA once a month is sufficient for these checks, but doing it every week is a way to stay better in touch with them. It has proven to be a wise choice. Most of these pregnancies would be considered high-risk as so many are undernourished and struggling to provide for themselves. Almost every week someone has a blood pressure or a weight loss that points out a need for quick intervention.

Some weeks pre-natal day is encouraging and fun. Other weeks are heavy and mind-boggling. Today was the latter.

We showed a movie to the ladies called "The Victim" - it is heavy material meant to point out how choices of one person can trickle down and affect many. The movie was made in Haiti and Beth first saw it when she was on a bus to the D.R. The film takes a look at AIDS and the way it spreads and destroys lives. A lot of it is shocking from a Western perspective - so much of the cultural way that men and women interact here is difficult to understand or accept for us. The room was pretty quiet and as near as we could tell it caused most to pause and think. Abstinence is the ideal, but pushing something that won't work in a culture or play out in real life is a lot like beating your head on a wall ... many choose to do that ... but we handed out protection. It hurts our heads a lot less.

Today was chock-full of heavy situations ...

The first was a new girl that showed up. She was 21 and frail looking. She had a baby and lost it when it was two months old last year. She said it died because a "werewolf killed it" and then she said she thought she might be pregnant again. We took her blood pressure. It was 153/107 - she was a tiny little 87 pounds. When we did the pregnancy test it came back negative. We took some time to try to get to the bottom of things, most of which we failed to do. She said she did not nurse her baby; she gave it bottles. We asked about the water she used and wondered if maybe the werewolf was not really just dirty water that caused diarreah, dehydration, and eventually death.
at Thursday, January 22, 2009