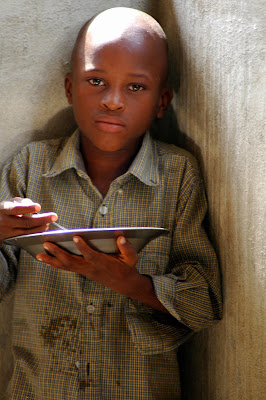 As we left Port au Prince and traveled to Florida on New Year's Day last week - we found ourselves on a full airplane. Most of those traveling had a visa that allowed them in and out of the USA for a period of a year or more, some were U.S. citizens. They likely had family and friends living both in the USA, and Haiti.

As far as their place on the Haitian economic ladder, they are "wealthy". Any Haitian with the ability to go to the Embassy and ask for a visa and then purchase an airline ticket is doing very well... All things being relative. They might be providing for 25 family members, they might have a ton of pressure to come up with answers and resources for a lot of people, but *they* are the "lucky" ones.

When we landed the flight attendant made an announcement and thanked everyone for flying. She said, "Thank you for choosing American Airlines, we wish you a healthy and prosperous new year."

For me, "good fortune" and financial success means I buy almost whatever food I want, shop for clothes for my kids at Target and Old Navy, go to the doctor whenever we need to, and pay all my bills on time without any juggling/borrowing of funds. It is making ends meet without much stress.

For some economic well being means they vacation thrice yearly, their investments are always earning money, their bank accounts and assets are growing while they sleep. For most Haitians, economic well being or "a prosperous new year" would simply mean that they could feed their kids and sleep with a roof (of any variety) over their heads.Their prosperous new year would look a lot simpler than mine - and mine would look a lot simpler than many.

What does prosperous look like for you? How does that compare to the world around you?

What if "prosperous" was defined less by our own personal economic well being and ranking and more by our ability to care for others. If giving was the standard for prosperity, how would I fare?

As I thought about the wish the flight attendant made for us --- I also hoped that we would experience what amounts to prosperity in 2009 ... But more than that I hoped that this year I would be uniquely aware and always conscious of my own abundant blessings and use the gifts I've been given responsibly, generously and without reservation.
at Thursday, January 08, 2009