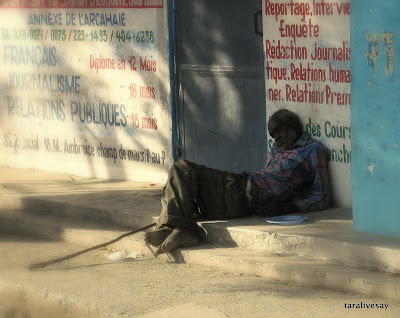 In recent months Troy and I both had an opportunity to visit an amazing church in Texas. Each week hundreds meet under an Interstate bridge to gather and worship. Having lived in an incredibly intense place for a few years neither of us expected to be moved by a church that welcomed the homeless, poor, down-trodden and hurting. We figured- we see that every day, it will be familiar to us.

We were wrong. As we stood worshiping we were uniquely aware of God's love for every man. It was a sacred place, an intense and unique experience. Tears rolled as we looked around at those gathered at the "Church Under the Bridge." Who would think a bridge underpass could be described as holy? But that is exactly what it was. We were convicted of our own tendency to assume that the less fortunate among us have less to offer. The truth is, we see outward appearances first, and we usually make decisions based solely on these things.

In Haiti people will often tell you that they cannot go to church because they do not have the right shoes or clothes. When we first heard that we thought it was just a silly excuse. But the more we attended churches and watched, the more it was proven true. Appearance is highly valued and those with less are looked down upon and ignored. If you don't have something nice to wear, you should not come to church. That is the message the church in Haiti is giving. It is no different here than in America.

Our automatic response to seeing a man like the one pictured above is to look away, to turn and walk a different direction to avoid eye contact. We know we're guilty of deciding things based on appearance. We want that to stop. A church in Waco, Texas served to convict us of our guilt and we pray that others will begin to see it in themselves and desire to find ways to change too.

Jesus chastised the religious Pharisees because of their preoccupation with outward attraction. "Woe to you, teachers of the law and Pharisees, you hypocrites! You are like whitewashed tombs, which look beautiful on the outside but on the inside are full of dead men's bones and everything unclean" (Matthew 23:2). Driven by some insatiable desire to be approved by others for what they wore instead of who they were, the issue was significant enough to the Son of God that He frequently used the concern for outward appearance as a sign of infidelity to God.

Yet it is the nature of humans to judge others by their physical appearance. Somehow we imagine that the wrapping paper is representative of the gift inside. If we are pretty, we are pleasing to God, we assume. But nothing could be further from the truth. "The Lord does not look at the things man looks at. Man looks at the outward appearance, but the Lord looks at the heart" (1 Samuel 16:7).

~~~~~~~
"The fact that we do segregate around issues of appearance keeps the very people Jesus sought out of our churches."
at Tuesday, April 21, 2009