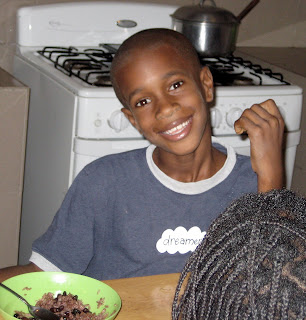 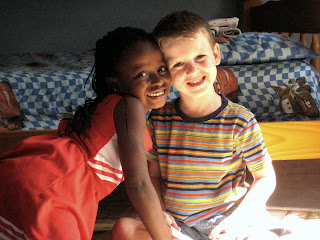 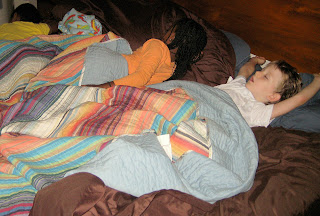 Isaac gets no end of grief from his teacher when his hair gets too long (for her liking). It is one of those little cultural things where we (being of one culture) and she (being of another) won't ever agree about it being (not) her business when his hair needs cutting. She is very sure of herself because besides mentioning it to Ike many times in recent weeks, she actually told Troy at conferences that Isaac needs a haircut. Troy is the nicer of the two of us so he just nodded and said "yeah, we will get to it".

If you need to know if your kid needs a haircut, email me a photo and I'll get it to her for an immediate answer. Opinions about other peoples children are freely shared in these parts. Culture prevails, and we're the visitors, so we must suck it up and deal. Ike finally got his haircut last weekend. His teacher probably won't mention it again for at least six weeks.

Troy took the bottom photo when I was gone. The 3 kids like to keep him from feeling lonely ... and also from sleeping.
Lydie and Troy both had a much better day today. Thank you to each of you that prayed for them. Troy has now had Malaria five times in three years and is pacing to catch John McHoul ... since he cannot beat John at Tennis, we're creating a Malaria contest. We think we can win. Bring on those vector-borne infectious diseases!

Paige and the babies are all doing well too ... 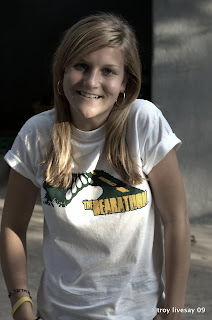 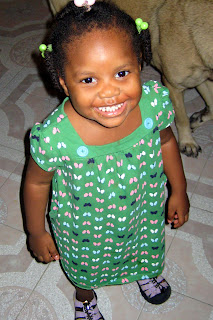 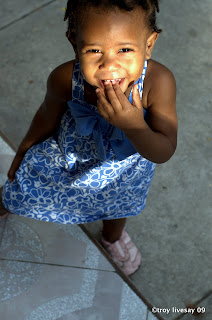 (Lydie was not up for photos today - bad hair - bad attitude.)

I tried hard to come up with some big lie to post for April Fool's Day... but all the lies were too terribly cruel or too terribly obvious. I've got nothing. It is April, and it is getting hotter by the moment. We're trying to figure out a way to move the island ... LOST style.
at Wednesday, April 01, 2009