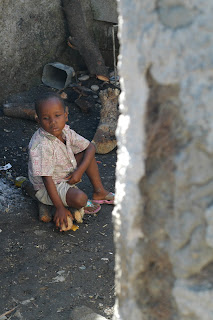 Go here.
I think it is easier to look away. Living in the midst of a lot of suffering I still find ways to look away sometimes. Maybe even too often?  I'm thankful to those who see, those who care, those who work at grassroots levels to alleviate some of the pain and offer small pockets of hope. I am especially amazed by those who have been doing it for a decade+  and still press on.
You know who you are - we thank you!

Quoting from the NY Times piece:

But indifference to the suffering of others “is what makes the human being inhuman,” he said, adding: “The political prisoner in his cell, the hungry children, the homeless refugees — not to respond to their plight, not to relieve their solitude by offering them a spark of hope is to exile them from human memory. And in denying their humanity, we betray our own.”
at Tuesday, June 02, 2009