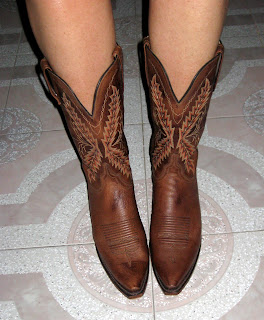 I left Saturday for a quick trip to Dallas, TX. I am home again. I did not say anything before going because I wanted the three days to be blocked off for time with Britt and Paige. I know that sounds jerky but it is hard to say "No, I don't accept your offer to meet for coffee, speak at your church, or go out to lunch." I have offended before so I was trying to have boundaries without offending. I get about ten days a year with Britt so I wanted it to be a girls' bonding time.

We ran some important errands. We met a super gal who will be moving to Haiti in late August to help with our kids and do some homeschooling for us (more on her and that soon), and we shopped and shopped some more. Troy let me pick out my own B-day gift a week early. I now own cowboy boots. I have wanted them half my life. So that is pretty stinkin exciting. Is it not? Yes, I plan to wear them in Haiti. Hot is hot is hot. Boots won't change that.

On the way to the airport we stopped to fill my empty duffle bag. The rule is: never leave allowed luggage sitting on the table. Packing the full allowance is a must once you understand how hard it is to get things down here ... and how expensive they are. The goal was to buy about 50 pounds of stuff and get it in the bag easily.

As we packed an odd assortment of things including: strawberries, grapes, peanut butter, coffee creamer, diapers, crackers, cereal, wipes, sippy cups, etc. in the middle of the parking lot - Britt said "Some people don't do things like this."

I find nothing odd about walking into WalMart and walking out with 50 pounds an hour later and packing a duffle bag in a store parking lot. I also think throwing my arms in the air and doing an end-zone celebration at the American Airlines counter when a bag weighs exactly 50 lbs is a normal way to respond. The agents always act like it is not all that normal. ??? I don't get that. They must not understand victory. Or maybe we left 'normal' a long, long time ago.

The travel home had its usual annoyances and entertainment. The most annoying was the TSA woman who let 23 bags just like mine go by and then told me that I would have to go back to check mine because it was too big. The lady before me had an identically-sized bag. I find the ever-changing and ambiguous rules and enforcement of those rules to be maddening. I argued with her - made it fit in the metal box thing to prove she was wrong - felt vindicated and acted generally mean toward her. Don't mess with this kind of crabby after two hours of sleep Mrs. TSA lady at the Tampa airport.

On the plane to Port au Prince all rules are out the window. People call five items two and argue with such vigor and passion that the airline employees eventually break down and say, "Okay - your carry on suitcase, your giant mall shopping bag, the shrink wrapped stack of hats, and the trashbag with twine around it only count as two items. Have a nice flight." Then they announce all the rules over the loud speakers while no one listens and no one cares and everyone does whatever they want.
Good times I tell you, good times.

Four flights arrived at noon today. It was total madness. A lot of funny business happens with people bypassing immigration and I always wonder if anyone even knows who is in charge. When my guy told me to go to the back of the 200 person line because I filled out my card in red ink, I decided to embrace the culture and just flat out refused. I stood there and refused ... he kept pointing for me to go to the end of the line. He said he did not have a new card. I ignored him some more and then walked away toward the baggage claim even though he had not stamped my passport. That worked, he relented, handed me a new card and let me fill out a new card on the spot. I do not know why it must be this way ... but that is how it works. Whoever is the biggest jerk with the best ability to act undaunted and disinterested gets what they want. Refuse to do what you are told - bam - you get your way. It is kind of like living life in puberty and pushing to see what you can get away with. It is madness. To make it all just slightly more stressful, I was carrying a year of rent that we owed our landlord. (Most people who rent in Haiti are required to pay a full year in advance.) Carrying a lot of cash makes my tummy churn even in controlled environments. You can imagine what it was doing today.

My bag came around the carousel dripping bubbles. The giant bottle of dog shampoo I bought busted open and soaped up half the airport. The Cheez-Its were smashed into tiny crumbs (but Troy ate them off a spoon so no worries) and everything had a layer of anti-flea bubbles on it. But it got here. The strawberries were a hit. Noah thinks I am a super-hero for bringing that to him.

Everyone missed me and acted like I was gone for a lot longer than I was. I missed them too. It is good to be home.
at Wednesday, July 22, 2009