19 days and 2,000 miles after we departed Waco, TX, we returned in one piece (or seven pieces plus the one piece that came back here by airplane and skipped the dreadfully long ride home...lucky piece that she is). For the most part engaging in real life relationships and ignoring the internet turned out to be everything we'd hoped for. The 'Suburden' carried us and a billion crumbs and wrappers with only a few hiccups.  When we pulled back into the driveway after 20 hours straight in the truck, Troy said, "Let's not do that again." (The drive - not the time away.) 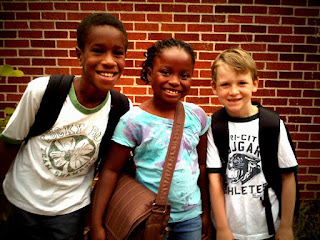 The 3 kids (Isaac, Hope, Noah) were four days late to school - but thankfully their lottery spots were not taken from us due to our tardiness and they were allowed entrance at a great charter school.  Isaac and Hope seem very happy with it.  Hope especially loves it, she came home telling us we'd found her "the best school ever!"  Isaac always gets a little disturbed by bad behavior of other kids. He cannot quite understand why anyone would lip off to an adult or be naughty.  He asked after day one, "What the heck is going on with those kids?"  Oh the sheltered life.  It must be nice.  Noah. Our dear kindergarten baby boy, all ready to go, or so we thought.  Day One:  "They make you do what they tell you to do and not what you WANT to do."  Day Two: "Am I going to go to have to go fo-evah?!" (tears) He begged not to go on the second morning.  He is not too impressed with it so far.  It also REALLY ticks him off when they call for him to come to the door by saying "Livesay" instead of Noah. Both days he came out frowning and said with disgust, "They don't even know my name!"I believe we have convinced him he needs to give it a few more days before he makes his final judgment and quits school fo-evah.

We're trying to resolve the issues to get Phoebe her passport.  I guess the U.S. government is so thrilled to have her as a citizen, they don't want to let her leave. If the passport stuff won't work itself out as quickly as we'd like it to, Troy will plan a trip and a few weeks in Haiti next month.  We'd much rather all go home together as one united family, praying for that to be possible.

Sunday we're going to worship with some of the greatest people in all of Texas at Church Under the Bridge.  Troy gets to play guitar and sing with the worship team. The kids get to ask me lots of questions about why people are smoking at church. I.LOVE.IT! This place brings me to tears every time I attend, it is a beautiful picture of the church being the church to the lost ... rather than go on a rant about all that bothers me about today's christian church of america -- I will just say:  If you are ever in Waco, TX on a Sunday, you MUST experience this beautiful place. We've enjoyed a couple of opportunities to be with Jimmy and Janet Dorrell - they are an absolutely fabulous and inspirational couple that we hope to learn a lot more from before we bail out of this state/country.

John is smack talking about his Hay-uh.  Help shut him up for a few days. Please GIVE to the Gwo Cheve Challenge and help build a 20 bed hospital in Port au Prince, Haiti.  (See previous posts for details and Chip In Meter to donate.)
at Saturday, August 21, 2010