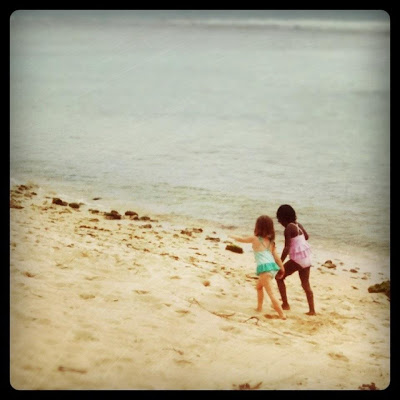 All parents of small children understand how totally annoying and utterly stupid the bickering that goes on between siblings can be. For the most part the things children choose to fight about are moronic and inconsequential.  "She looked at me." "No! She looked at me first!" can divide sisters for an entire day.

Sadly, I think grown-ups, even the kind wearing big-people-pants, tend to engage in similar battles on the interweb.

Sometimes the internet is such a crappy place. I get disgusted at how rude people are to each other  on-line  ...  Right up until I remember that I've been one of those rude people too. Doh!

The disagreements and battles that we engage in over the internet are not things we'd likely say to one another if we were standing face to face. We are all so much more polite in person.

A long while back one of our most consistent encouragers wrote to tell me that she vehemently disagreed with me on something I'd said. She explained why. She told me I had an obligation to use my internet voice responsibly.  (She maybe meant that I had a responsibility to agree with her internet voice.)

I really like and appreciate this lady so I simply suggested that maybe on that one topic we could agree to disagree. That is the very last time she ever interacted with me. She went from very frequently commenting and encouraging to zero communication of any kind over one small thing. We'd never met in real life, maybe that means we weren't actually friends, I'm not certain how the rules of friendship are applied on the web.  I only know that stuff like that happens on the internet a gajillion times a day.

In my opinion we divide over things of little consequence. We treat each other like dump over things that shouldn't matter so much. We insult each other and even make it personal when we could have chosen to just remain silent.

That incident with my "friend" from the past has me paying even more attention to how I treat people I disagree with and using caution when deciding how and when I use my voice. I'm not obligated to share what I think on every controversial or lame topic - who knew!?!?  Besides the fact that there isn't a need to enter into most debates, the fact remains that good and even reasonable people can (and do) disagree. That is not only a cliche, it also seems to actually be true.

Not related specifically to internet controversy, but applicable none the less ....
In his post called "I am the Pharisse: Pondering Past Hurts and Current Controversies" Zach Nielsen said:

In addition to hurt from our past, we are constantly processing and assessing different situations, personalities, and controversies. He said, she said. That leader did what? Did you hear about so and so? We live with the front page news staring us in the face.
As I attempt to diagnose my own heart, these two scenarios form one of the great battlegrounds of pride. As I consider those who have hurt me in the past or situations today where someone "just doesn't seem to get it," my assessment can quickly default into the Pharisaical position of smug superiority. I have practically memorized the parable of the Pharisee and the tax collector, and yet I still find myself, over and over again, in the position of the Pharisee.
I default into a man who smugly stands afar with his arms crossed and internally says, "This idiot over here doesn't have it together like me." Usually this is in the name of "what I am learning" or "standing up for the truth," but often I glean a keen sense of subtle superiority from gossipy conversations with others about others.
There is certainly a time to stand up for the truth, to dissect sin issues of others, to assault heresy, talk about a foolish public figure, and/or process a painful past. In a fallen world, it has to be this way and always will be until the coming day when Jesus makes all things right. But the greater question concerns our posture. What emotions do we carry? What conversations do we have with others? What is the tone and content of those conversations? Do we have a "I sure am glad I'm not like that idiot" attitude? Or, "How in the world could he screw that one up so badly?!?!?" As if people have never wondered those same questions about me.
Controversy is always going to swirl around us, especially in the information age. Jesus' teaching about the plank and the speck remains timelessly simple yet painfully difficult to apply in daily living. Having a plank in your own eye doesn't dismiss the speck, which must be dealt with. But having a gaping plank of sin in your own eye will probably alter the manner and measure with which you remove your brother/sister's speck.
So as you process the mistakes people made in the past that have deeply affected you, or you look around today and assess different issues, controversies, or personalities, does your default setting lean towards smug superiority or repentance?
Sadly, I know that I am too often the Pharisee. Pharisees need Jesus. Pharisees can be forgiven, too.
God chooses to use us in spite of our weaknesses. It's hard to read the Bible and not see that as a theme through almost every narrative. Moses was a murderer, Noah was a drunk, Abraham was a liar, David was a murderer and an adulterer, and Peter was a loud-mouthed racist. I am so thankful that God chose to use those men in spite of their glaring weaknesses. I pray he uses me too.


{Go here to read the entire post and comments where it was originally posted.}