Three weeks after the EQ we arrived in central Texas totally frazzled, more than half crazy, and quite a bit thinner to try to figure out how to :

1. Process the tragedy
2. Reconcile our faith to said tragedy
3. Reconnect with kids that had been traumatized and without us for 3 weeks
4. 'Enjoy' a break while wanting so badly to not take one

A few days later a note came from some guy named Robbie.  He said he wanted to treat us to dinner at Chuy's  (a peculiar name that we'd never heard of) and that he hoped we'd enjoy a meal on him.  He said his wife told him he needed to make contact with us. I remember saying to Troy, "Does he mean he is coming to take us to dinner or that he is buying when we go to dinner?"

We felt like insane aliens on a new planet and I wasn't signing up to go talk about Haiti with anyone quite that soon. Within a day or two we figured out that Robbie was giving us a gift card to Chuy's and we were free to go stare at each other glassy-eyed over Tex-Mex and not interact with this Robbie person.

A new friendship was born.  Any person that knew enough not to expect us to be coherent and/or social -  but was still willing to fund and introduce us to one of the. greatest. substances. on. earth. (Chuy's Creamy Jalapeño sauce) - had to be an inherently good person.


Later on when we were less freak-showish we actually got to meet and Robbie and Liz and other Seays and attend their church. We figured out that Robbie and his band produced a lot of moving music that stirred us and spoke to us in places of deep pain.

His records became the soundtrack of our healing in Waco, TX in  2010.

(Well - except for the time that it became the sound track of a badly sprained ankle and a string of curse words- but that's another story. Suffice it to say that running as fast as you can with your eyes closed while listening to the RobbieSeayBand isn't advised. Just ask Troy. )
Songs like these:

The music above is from older albums, the lyrics often have a prayerful tone. In our opinion the trademark raspy voice cannot be duplicated. We think we know this because Noah tries and tries to sound like that - to no avail. 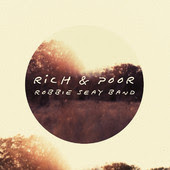 The Robbie Seay Band just released a new album called - "Rich & Poor" - you can check it out here.

It is fun to have the Seays here for a couple of days. They are off visiting a Compassion project and Cazale today. You'll recall that our song of the New Year -  'Slow me down'  - is sung by Robbie. He isn't yet aware of this, but he will be required to sing the entire family to sleep with the 2012 theme song on his last night here ... unless of course he prefers to walk to the airport.
at Wednesday, January 25, 2012