a striking viking and other tales

The kids give speeches at school each Monday. Noah gave a speech AS Leif Ericson today.

Viking head-gear must have looked quite a bit like this ...  Yeah - for sure it did.

Little known nugget of historical goodness recently unearthed by researcher Noah Livesay:
The Vikings were revered for their innovative use of polycarbonate composite in combination with aerodynamic tin-foil horn design.

During the research phase the names of Leif's family members brought raucous laughter from this particular eight year old. Wikipedia, the source of all the truest and most reliable information in the world (after the media of course) says,


"Leif is described as a strong man of striking appearance,
who was wise and considerate. During Leif's stay in the Hebrides,
he fell in love with noblewoman Thorgunna who gave birth to their son Thorgils."

If in fact the real life Leif E. was this striking, and also so safe and conscientious as to always wear his chin strap securely fastened, it is no wonder Thorgunna chose him to father her son and make a Viking life together. 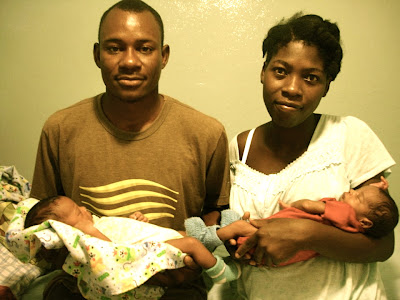 Vitana is starting to think about transitioning out of the Heartline postpartum wing and back to reality ... no official date is set but the babies passed the two week mark yesterday.  Hurrahs going up all over the place for Vitana!!!!!


Last night and earlier today ...
First it seemed Faphane (15 years old) was in labor, then it seemed she wasn't, then she was again, then ???? -- We're not totally certain, we're just watching and encouraging. Contractions had slowed way down by 3pm. Whether it happens tomorrow or next week, one thing became clear -- she is pretty darn scared about labor and delivery.

Like many young women in Haiti she's been mistreated and badly hurt. That variety of injustice makes a this person want to scream their her ever-livin-head right off.

We so hope Faphane can conquer the fear and scars that haunt her. We pray she'll begin to accept that she is  loved by people who don't expect anything in return - that she is deeply loved by a God the grieves such injustice.  He.MUST.grieve this sinful, sick, horrible injustice.

There is a love that never fails
There is a healing that always prevails
Love wash over a multitude of things - and make her whole.
Amen.

(Unashamedly stealing some Sara Groves lyrics and making them a prayer for Faphane.)