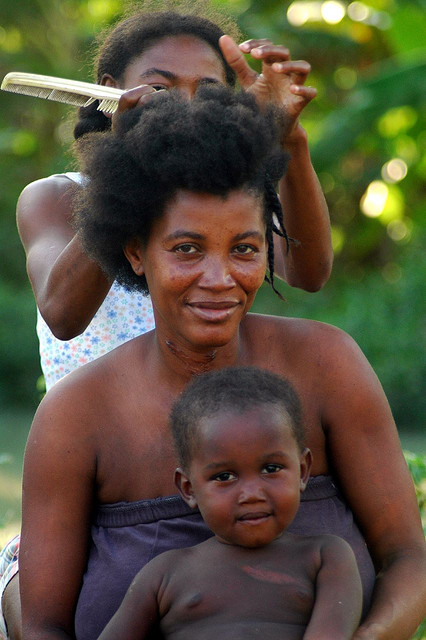 I have intensely complicated thoughts about everything related to poverty, orphans, orphanages, and international adoption. Some of my thoughts are developed thoughts and others I am wrestling with as I wonder about the roles I have played in the system and as I watch injustice and unbalanced power all around me. The still forming opinions have much to do with seeing (daily) how easily the materially poor are manipulated, used, and exploited.

These thoughts are complex enough that without face to face discussion and tone of voice and real relationship I don't see the value in "going there" and causing anyone to feel defensive.  In fact, before I lived here for a long time, I never could have believed the things I now see happening.

All that to say, I am ruling out that particular discussion (and post) at this point, but there is one thing I'd like to take a stab at in regards to Haitian adoption law.

As you read the following, don't hear me defending it or telling you how to feel about it.  We all have equal freedom to rage about it and be indignant about what we perceive as a lack of fairness  - but from the Haitian cultural perspective I'd like to attempt to postulate a bit on the possible "whys" of the adoption laws.

The 1974 laws on the books state that adoptive parents must be 35 years of age, married ten years, and have no biological children.

When you stop to think about those laws, it becomes apparent that the majority of likely adoptive parents don't actually qualify to adopt.  That has been very frustrating for many adoptive families.

In Haiti getting a primary school education can take many years.  Reaching the point of a completed secondary school education takes much longer.  Once one finishes secondary school, going to university is something only the luckiest are able to do.  Getting settled into a career where you can make enough money to provide for your family takes additional time. It is not uncommon to run into a smart, hard-working 25 year old that is still trying to finish the equivalent of 12th grade.  All of that is to say that when lawmakers talked about whom is a good candidate to adopt they were seeking people that have an education and a stable income.  In their minds that would likely be a person in their mid thirties. While all of us know a dozen 26 year old people with great jobs and stable lives, that is not the norm in Haiti and the age was set with *these* cultural presuppositions.

The reason for ten years of marriage is likely similar too - they want to see that you have spent time getting established, and proving you are committed.  With a divorce rate 50% or higher, they want to see some longevity before you adopt one of their children.

[And now the argument, "But certainly my 30 years of life and my middle class income and three years of marriage is better than being without parental love and living in a very crowded institution!"  Yep.  I'd say so. We could disagree about what parameters are best for adoptive parents - but we can all pretty easily agree that crowded institutions are the worst; a terrible long-term solution for children. Unfortunately laws are made and enforced without concern for logic like that. That is not a Haiti problem, that is an everywhere problem.]

In Haiti it is not uncommon for families to send their kids off to work with another family in exchange for schooling or even just solid access to meals.  Kids are used for labor.  Like it or don't like it, kids do a lot of work and have responsibilities in this society.  The kids that most often get the short end of the stick are the kids that are working for another family (not their own).

We see it in our own neighborhood. Right down the block is George.  George has a couple biological kids that are well dressed and kicking a ball around in the afternoon and going to school during the day.  George also has other kids that he "cares for" (not debating that here - but trust me, it is debatable) - those kids don't wear nice clothes or shoes. They don't go to school.  They get to eat but they also do a lot of early morning sweeping and evening dish-washing.  The plausible reason for the law stating no biological children is because we have a culture that presupposes that you won't be able to treat your biological kids and your adopted kids the same. If you have no biological kids you are more likely to fully provide for and love your adopted child.

I realize it is upsetting to many.  For prospective adoptive parents it is troubling to hear rules that don't make sense and to be forced to comply with them. The President of the country has to give special permission in the case of adoptive parents with biological kids. I always try to remind myself that we are guests and that we cannot expect our rules and norms to apply here, nor should we.

These are educated guesses regarding the reasoning behind the laws, I highly doubt they cover the full scope and breadth of it.
at Tuesday, April 02, 2013