Ode to NutDog One Point Oh

Thank-you to all of you that did not OPENLY eye-roll our dog drama yesterday.

(If you openly eye-rolled, you get zero thanks.) (Just be discreet!)

We get that the world is chock-full of real and terrible problems.  We do.

Actually, we sometimes see those problems from the front row, which means we get that losing a pet is sorta kinda a first-world (person of privilege that has money to feed a pet) type prob.

Yesterday, we took a moment away from the real world problems to grieve the loss of our dog, Peanut. None of us are so shallow in depth that we think this is of huge importance beyond our own family --- but for a few hours it felt very big.

I actually understand if you eye-rolled while also leaving a sweet word.  That seems pretty appropriate too.

We arrived in Haiti early in 2006.  Prior to our arrival, in December of 2005 a litter of Mastiff puppies was born.  John and Beth McHoul's male Mastiff was the dad of the litter, meaning they got to choose a puppy as payment.   That puppy became our first pet in Haiti and also the first pet any of the Livesay kids from Isaac on can recall.  Britt and Paige had a Cocker Spaniel before Haiti, but none of the other kids knew that dog.

Peanut was named by our oldest daughter, Brittany.  She was such an amazing pet right from the start. We loved her. We had never owned a big dog before. Mastiffs are BIG dogs.  In her first year she ate way too much rat poison and almost died, but thanks to the internet we figured out how to get her to puke it up just in time.

She came to the USA when Britt moved to college.  (Because stupid is as stupid does.)  Peanut then had to return to Haiti, but only after a bunch of ridiculous crap happened.  (THANK YOU, DAD!)

Here is what I know from that time:  Lactating women that are ALSO saying goodbye to a child that is heading to college - yeah - those women will make shit happen.  They are not women you should mess with.  Ever.  That is a hormonal cornucopia that nobody should challenge.

Peanut was a faithful, loving, protective friend to all the kids. She never hurt anyone. She loved and protected. Even when Lydia and Phoebe were babies and we had the foster kids in the house, Peanut was never an obnoxious big dog, she didn't knock babies over.  She was way too smart for that kind of nonsense. We had her for ten years and ten months, making her older than both Phoebe and Lydia.  She was smart and protective and gentle.

She started acting ill on Thursday. It did not get better or worse.  I texted our  wonderful Vet friend and just said that I wasn't sure what was going on with Peanut.

On Monday the kids arrived home from school to find that she had died not very long before they got home.  Thankfully Troy was with them and Beth McHoul was able to come over too to talk with them and be here at our house with them until I got home.

Our kids have quite distinct and individual personalities and approaches to life.  Each child here is experiencing their first loss of this kind.  (Troy's brother died in 2010 but they were all too young to really get that and they had not known him well because we had been in Haiti four years.)

The kids all responded in their own precious and unique way.   Isaac is the biggest dog lover of the group, he also is not one to exhibit outward negative emotion.  It was a lot for him to lose his dog.  I wondered if he would cry for the first time in several years.

As he went to bed last night, he asked that Troy please be sure whomever was going to put Peanut into the grave/ground  please not just throw her in it. He wanted them to gently set her in the ground.

I was at a birth in the night last night and arrived home this morning around the time the kids were waking up.  I saw Lydia first and noticed she was wearing something I had never seen her wear before.  I said, "Lou Lou - what are you wearing today?"   She made a big sweeping motion up and down with her hand and said, "Funeral clothes, Mom,"  A few minutes later Isaac came down into the kitchen looking pretty dressed up and I said, "Oh are you wearing funeral clothes too?"  He told me that Hope had called for dark clothing for the day.  He said, "Hope said wear black or grey."

I love it.  Nobody would question Hope.  She knows things.  MANY things. She is the big sister of this house, and big sisters have  a leadership role. They all left the house this morning wearing black, grey or navy blue.  They were appropriately somber.  Lydia wondered why I was not attending the funeral.  I told her that her Dad was our representative and I was going to return to work but I would be with them in spirit.

Troy said that they arrived at the land this morning and the dog was already down in the ground waiting on them.  They all put their notes into a box and placed them in the grave with the dog. A few of the kids said something.  Isaac very carefully set big scoops of dirt down around the dog.  He did not want to just toss it carelessly down.

The two sweet Haitian men that dug the grave were kind and understanding even though it is super duper first-world to cry about a dog.   They stayed quiet while the kids did what they needed to do.

Apparently word of the boss-guy-Troy out there crying with his kids was big gossip around the mission. Troy has less than zero cares to give about that.  Tender dudes cry with their sad kids. It is okay if that is mocking material.

Rest Peanut, you were the best dog ever. 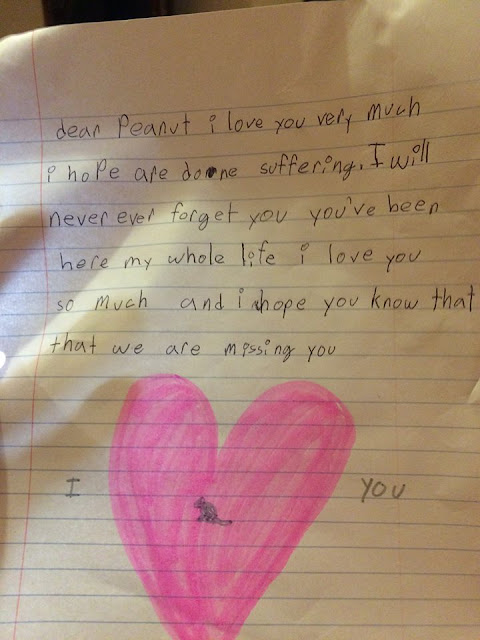 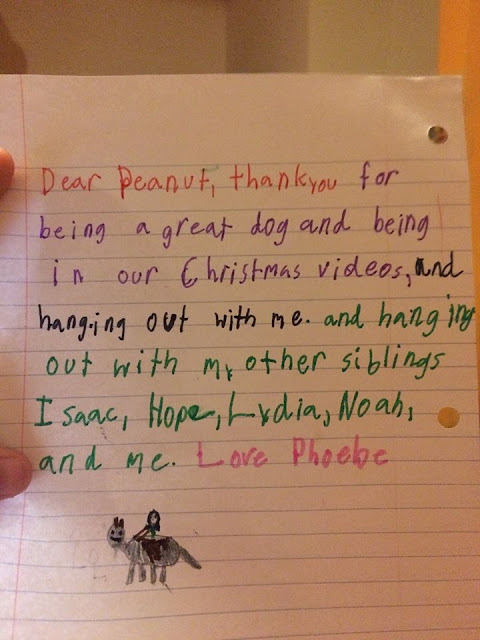