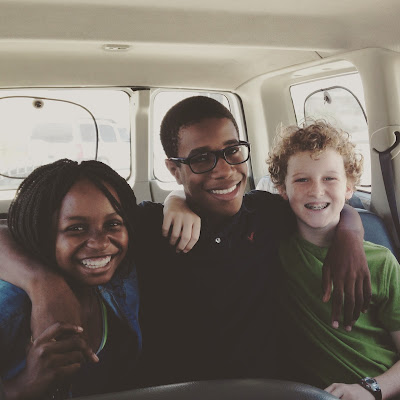 There are plenty of things that grown-ups are required to do that lead them to feel like they are teetering on the edge of losing-their-ever-living-mind and flying into a furious rage.

Troy and I did one of those things the last two Wednesdays in a row.

I would guess most Americans traveling abroad think warm fuzzy thoughts about their embassy. "We'll run to them for rescue in our hour of need", they think,  while they imagine the red white and blue flag hoisted high and whipping patriotically in the hot foreign wind in front of the building.

There is no getting in if you haven't asked for an appointment.  Sorry, but your emergency situation requires that you should have contacted them via email 48 hours in advance of the moment you had your emergency.

Also, there are no emergencies.

In your non-emergency situation, once you do get your appointment, everyone from the security guard outside at the tent, all the way to the person you speak to at window 33, will make sure you know that you are in fact, a giant nuisance to them.  <Eye roll.>

Your number is called. You eagerly approach the window. The face looking through the glass stops you dead in your tracks. The expression says: WHAT?DO?YOU?WANT?DUMB?AMERICAN?CITIZEN??MAKING.ME.STAND.HERE.

On the second visit Troy was about to have a fit and in a huge role reversal, I played the cool-headed savior of the situation and started making jokes.

The new passport photo that had been fine for Noah had somehow suddenly become not fine on the second visit.  "His head is too small here",  the robot lady said, with zero intonation in her voice.

"Well, I guess we just sit here till his head grows." I said, cracking up at myself.

Nothing makes a mother happier than causing her children to bust out laughing. They did.

I added, "Sorry Noah, we could be here awhile."

We laughed in the face of their rejection of Noah.

Isaac said, "That is so dumb! Let's protest their rules!"

Hope said, "The five us can overthrow the government!"

Noah, the voice of reason and order, said, "Guys, we are not mission impossible."

I said,  "Maybe we all join together and pull on your ears and try to stretch your head out."

All dumb jokes aside, we knew we would need to come back a third time with another photo of Noah with a bigger head. We waited to be called up again.

Once back at a window with little-head Noah and the other two,  they wanted proof of Isaac and Hope's adoptions which are now almost ancient history.

Keep in mind: two things. One, they never said we had to have adoption paperwork, just birth certificates and current passports.  We had both. Two, these are U.S. Citizens that are on their THIRD U.S. Passport application (they only last five years for kids and their first and now second passports have expired).

Troy got a little witchy after being asked for adoption paperwork, so I pinched him in his back and stepped in to talk to the ruler of window 33.  "Well, they were adopted in 2002 and have been citizens for over a decade, so, no - we don't carry adoption paperwork around."

Isaac said softly,  "Feel the chi coursing through your veins."

He has been participating in some Yoga classes during Summer School.

Once we sufficiently explained to the government how they process their side of the adoption and how they chose to list the names of the children and what type of immigration visa they issued us in 2002 and how children usually don't walk around forever with adoption paperwork, we were free to leave their window, in search of new, more interesting people to hate us.

That's how it is.

They don't call it the embAssy for nothing.