The goal of this family tradition was two-fold.

ONE - for memories of our kids as they grew up in Haiti. All parents know this all speeds by so quickly.

TWO - to spread joy and maybe make you smile. We hope it brought you at least one laugh.

We are INCREDIBLY GRATEFUL to each and every one of you that have supported or prayed for the work of Heartline Ministries in Haiti and the staff and participants and clients.  It is always humbling to meet people that say, "Hey, I've been praying for a Mom you shared about. Can you tell me how she is doing now?"

THANK YOU for caring about the beautiful people of Haiti, especially Moms in the most vulnerable time of their lives, awaiting a new baby.

The embed option on Blogger doesn't always work. For the last three videos I included the YouTube link in case the embedded video does not appear for you.

MERRY CHRISTMAS TO YOU ALL & PRAYERS FOR YOU AS YOU CLOSE OUT THE YEAR THAT WAS A BIT OF A BUTT KICKER.  GOODBYE 2019.

Filmed at Heartline Maternity Center -- HOPE as MARY - Baby Jesus played by newly delivered baby Jamesly ... We just saw him a month or two ago and he's walking and smiling and doing great.


In 2013, Paige moved to Waco Texas and I finished Midwifery studies.  Because we wanted to help Paige transition AND I had to do a bunch of stuff for my studies that I could not accomplish in Haiti, we lived in the USA from mid August until December to get my required clinical experience in USA.

We went for a week to our friend Melissa's (well, her Dad's) cabin in the Great Smoky Mountains for one week.  We had just bought the puppy (now an asshole - old dog).  So, Chestnut was like fourish weeks old. He wasn't supposed to be away from his Mom but she had a Meth problem and couldn't feed him so we bottle fed him and got him at four weeks of age.

ALL THAT TO SAY --- this was the year we were in TN to film.  We used Melissa's place to film the entire thing.  I had the idea that Jesus and Santa would battle.  OBVIOUSLY, Isaac was the only one that could play Jesus.  He's the nicest person in our family.

Hope you enjoy it!

This is all at the soccer field in the neighborhood we lived in from August 2008 until now. Troy wrote the extra verse for the song. This is from Christmas 2012 - the last Christmas we had Paige in Haiti with us before she moved out in mid 2013.
at Saturday, December 14, 2019

Troy wrote the new Christmas message lyrics to this well known song - this year was many laughs and not much rhythm.  Filmed in streets of Port au Prince, at Heartline Education Center and at our house in Haiti.


The Earthquake of January 2010 was a painful time. So many lost so much. We were incredibly lucky to leave Haiti with our entire family alive. We had to live in Texas for 9 months that year because Phoebe was not legally our child yet and her adoption paperwork was all under rubble in an office building that had collapsed. This meant we started her adoption over in the USA. We even had a homestudy done in a house that Columbus Avenue Baptist Church (Waco) was letting us use. The nine months turned out to be important to us. Troy and I got lots of help for some trouble we where having from a horrible thing that happened in 2008 and also got help from the earthquake trauma. Phoebe's adoption was completed in November of 2010. We spent the month of December 2010 preparing to go home to Haiti and left for Haiti on January 1, 2011.
ALL THIS TO SAY -- the Christmas play was filmed in WACO, TX in 2010. Britt and Chris were newlyweds living nearby and going to school in Waco. Paige had a bad attitude about the play again this year but participated none the less.  I will post year five tomorrow!
at Thursday, December 12, 2019

12 Days of Christmas - Year One

Dedicated to the Sexy People & The Baptist Lady

Several years back, too many to count, we spoke about Haiti and other stuff at a tiny little Baptist church in the middle of vast fields of wide open space in the middle-east portion of the sprawling state of Texas.

On that day, I did what I often do, I said more than people are comfortable with - maybe especially because we were in a tiny little Baptist church. I don't actually remember what I said. I only remember what happened afterward.

At the end of the service when we were doing the stand around and be polite / do chit-chat thing, an older lady came to see me.  She was older in the sense of actual age. Not just older than me. I would estimate her age on that day to be 84.  She put her right hand on my wrist, squeezed and said, "Oh my Dear, thank you for visiting. We don't talk about those things in church."

I initially thought that was meant as an admonishment. Sort of a, "I can't believe you said that in the house of the Lord." Now I don't know for sure. All these years later I have decided that maybe she meant it as a kindness. You know more of a, "you Go, girl" kind of statement.

I think it is weird that so many topics are off limits with certain crowds.  My rebellion against that has been to freely talk about things most people find awkward.  It probably helps a great deal that I am a midwife and because I deal in poop, puke, fluids of all colors and aromas, nothing seems off limits for discussion to me.

Here's the thing about real stuff ... Real life is messy and unplanned. It is often disappointing or dull. It is not curated and lovely and linear. It it not always a perfect event like Internet "influencers" and advertisers wish us to believe.

Why do we still pretend otherwise? I honestly do.not.get.it.

Real life is an overflowing toilet, an unresolved medical bill dispute, and kids with hormones and emotions ruining your hopes for order or family unity.

I recently learned about the newest hyped up event in our American culture. Because of movies and television and curated social media, kids are now making up prom proposals as if life is some sort of fairy tale. It seems that just saying, "Hey would you be my prom date" is a thing of the late 90s or early 2000s.

If my son wants to invite a girl to prom and get the date, he is going to need to compete. I'm going to have to help him get his pilot's license, rent a skywriter airplane, and compose a sonnet in the sky. Sadly, the other guy that is asking the same girl already hired Pavarotti to sing an operatic prom invitation posthumously.

Sorry, Noah. Your skywriter is lame-sauce. 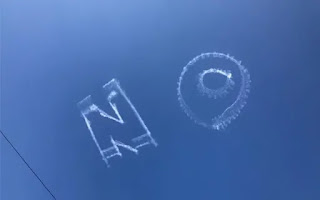 This is the over the top stupid way of our world now.

It makes my old-lady bones rage.

Who can live up to these expectations of grandiose gestures?

I will tell you what, youngsters ... Real life won't allow this nonsense for long!!

Thanks in part to ridiculous prom invitations and all of the unrealistic romance and sex on television and in movies, kids these days all think ahead about the wonder of being madly in love and how amazing the physical attraction and unhindered romantic gestures must be.

For certain, two people that love each other a lot must be living the best life ever with only really great movie-like love scenes and trips to Venice or Paris happening on the regular.

Because I am curmudgeonly, I would like to dispel some myths this afternoon.

We had not seen each other in a few weeks.  The 20+-years married attraction is still quite strong for us, but life, it gets in the way.  We were tired and our bodies ached from the busy day we had both had. We fell into bed and I said, "Rain-check for middle of the night or tomorrow morning sound okay?"
(This is actual sexy-talk.)

He looked deep into my eyes and said, "Heck yes, babe. Goodnight!"

A very short time later I sort of woke up. Disoriented, I wondered why there was tapping on my shoulder?? Does he think *this* is already the middle of the night or morning?!?!? GOD HELP HIM.

Once I realized the tapping was a smaller person, the words I heard helped me snap to. It was not my dear husband with a rain-check in hand. It was a little girl saying, "I puked all over my bed."

I hopped up. I saw the massive destruction. I went to kitchen for a spatula. I stripped sheets and took them to the bathroom. I used said spatula to remove scoops of food off of bedsheets and place into toilet. I started the first load of stench laundry. I put new sheets on the child's bed. I washed my hands, face, arms with soap. Pieces of fried rice came off of me. I came back to bed with the man I love and had not seen in two weeks.

We laid there, staring at the ceiling.

I finally said it.

And so, the incredible unimaginably hot scene unfolded.

Several moments into the rendezvous, I said, "Hold up. Argh! I cannot get the smell of vomit out of my nostrils.  I still smell it. That is really jacking with me,  would you please go put a ton of cologne on for me?"

A sexy-love-scene like this is what real life is.

My man, he jumped right up and ran to his cologne bottle for me. He covered up the smell of our child's puke like the sexy-beast that he is.

These kids and their silly prom-posals don't even know what there is to look forward to.

The 84 year old lady at the Baptist church will never read this post.  Nevertheless, I dedicate it to her.


Facts for your enjoyment:

How much does it cost to get something written in the sky?
If winds are strong, visibility of the skywriting can vary from a seconds to 5-10 minutes.  Skywriting starts at $3,500.00 for a single writing, plus any ferry fees to move aircraft into your desired location. Multiple writings per day can be discounted depending on location.  (Maybe ask two girls to prom to be sure you end up with a date?)