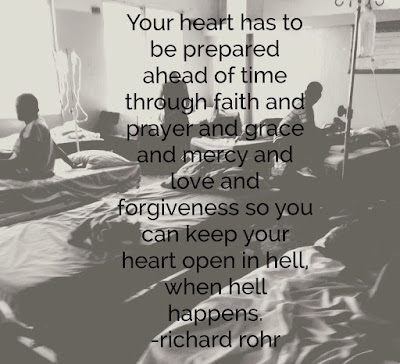 Living in Haiti we often encounter terrible situations that take our breath away, and cause moments of, "NO! How can this be true?"

Fatigue is a thing of course.  It is something to be cognizantly aware of while working and living in this difficult and oftentimes dark world.

The thoughts and struggle I have with fatigue is this: I am the one who is privileged enough to have the CHOICE of being fatigued.

If I am sick of seeing the way patients are treated, or the way a husband repeatedly beats or cheats on his wife without remorse or consequence, or the unfathomable living conditions of several thousands .... How much more sick of it or "fatigued" must they be?

The least I can do is try to keep seeing it and trying my best not to look away or give up on love.

It is important for all of us that live easier, simpler, calmer lives to keep prepared ahead of time through faith, prayer, mercy, love, and forgiveness so that we can keep our hearts open when hell happens.  Thanks to Richard Rohr for so beautifully stating what is required to have a prepared heart.
at Wednesday, September 30, 2015 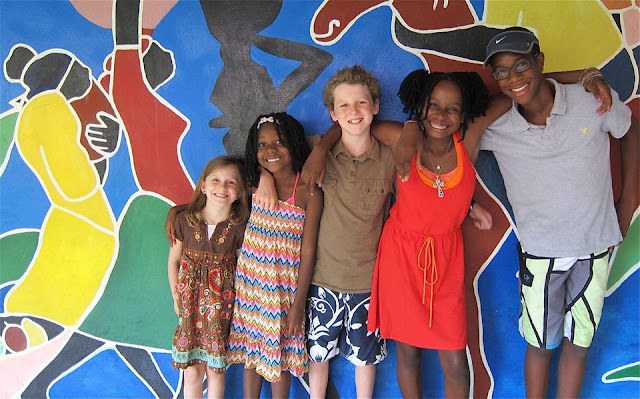 These are some really REALLY cool kids that are deeply loved and cherished by their parents - they are totally different from one another. They are: wild, shy, sensitive, funny, artistic, and the good kind of peculiar and complicated. These are five wonderful kids.

We know we are biased...So let us reword...Here are normal kids that we love because they are ours.

In the last ten years the Livesay kids have been home-schooled, gone to charter school in Waco, TX after the Haiti earthquake, and private school in Haiti.  Since August 2011 they have been taught by the same teacher who came for one-year commitment, but loved it here and stayed 4 years. (He is now teaching his final semester.)

All that history aside, the important thing is, these kids love to learn. They are good students with a desire to work hard (most days).

Just like other parents we value education and we want the best for our kids. While our situation living outside of the USA does limit our choices, we're certain there are viable solutions that will give our kids a well rounded and fun education experience.

In fact, we're so optimistic we believe our kids will likely graduate and move out some day. (Two of them have already done it and are in Texas.)  Heck, we dare to think that they might even excel as giving, caring, contributing members of society.

If you have been reading this blog for very long you know that living in Haiti is an interesting and exciting adventure at best - also sad, difficult and draining at worst.

Emotionally most people find themselves all over the board as they sort out what they see and experience here. We learn things every week about ourselves and our faith. This country will generally kick the butt of anyone willing to be introspective and honest about their feelings and attitudes toward the poor, hurting and marginalized. Those that apply for this position should do so knowing this will be an emotional roller coaster.

Emotionally stable people in good physical health will do best in Haiti.

The DESIRED qualifications:
Additional qualifications that are helpful:
Additional Information:
To all of you that read and follow along:
We appreciate your help in spreading the word to candidates that don't read our blog but are looking for an exciting (and challenging) teaching adventure abroad.  Please share on Facebook, Twitter, and any other way you see fit.


Resumes will be accepted until November 1, 2016. Interviews via Skype will begin the week of November 2nd. Interested candidates should email Tara Livesay a resume and note of introduction at:

Thanks for reading! Thanks for passing this along to the adventurous and available teachers in your life.


ADDITIONAL INFORMATION BASED OFF OF FAQs-

The reason we think that two friends both taking the job or a married couple is ideal is two-fold.  One, teaching four different grade levels is difficult.  Two, during your evenings and weekends we are concerned that it is possible that a person could feel bored or lonely when they don't have a car to easily get around and perhaps would feel nervous to use public transportation without the necessary Creole language skills.  There are several younger and single expats in the nearby community for those that are good at extroverting.

Salary will be based on experience and credentials.  Salary range is $500 to $800 per month plus an apartment on a very lovely and secure compound.

We cover one one-way ticket to Haiti.

One week Spring Break (paid) off.

The personality of the kids you will teach ...

looking back and remembering 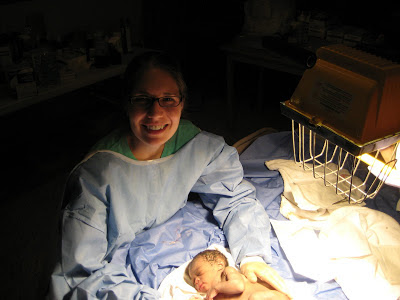 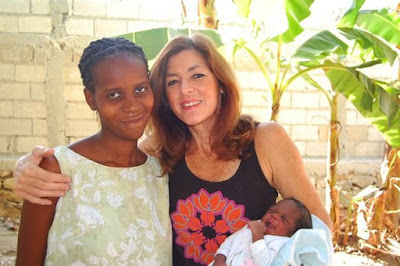 Last week Dr. Chris Sizemore came to spend a week in Haiti.  We all think he is the bomb because like Dr. Jen, he doesn't lord his Doctorness over us.  He came to work with us and hang out and teach us a bit. It was a blast.

In 2010 after the earthquake, this young woman showed up with a placenta abruption.  Chris was here working with Heartline doing earthquake relief medical stuff --- and it just so happens that Chris is pretty dang good at a C-Section.  Without much set-up or prep and certainly without a sterile OR, Chris was able to deliver the baby in under four minutes.  He then handed the floppy little guy over to Dr. Jen who did the PPV and got him breathing.

Midwives love telling stories. This story is one we tell often.  Since 2010 this Mom also had a VBAC with us at the Maternity Center.

While Chris was here last week we had a birth.  The birth was normal and without drama but it was messier than some and there was a lot of clean up to do.  Chris put on gloves and helped clean blood and amniotic fluid off the floor.

From now on, I think this is how women should interview and choose their OB doc ... "Will you help midwives clean blood up?"

First male (besides Troy or the Dad of the baby) that was EVER allowed at a birth.
Thank-you, Sizemore! 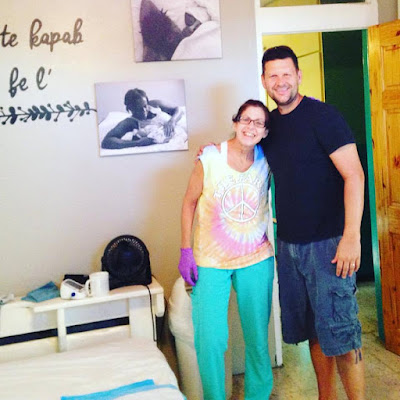 Our funny and fantastic friend April is fighting Breast Cancer.

Please read about her situation and how you can help by going here: 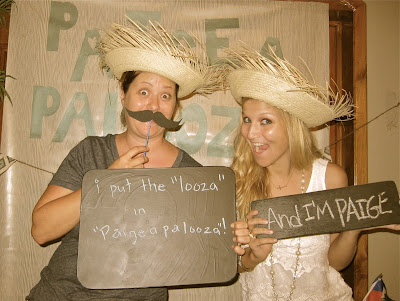 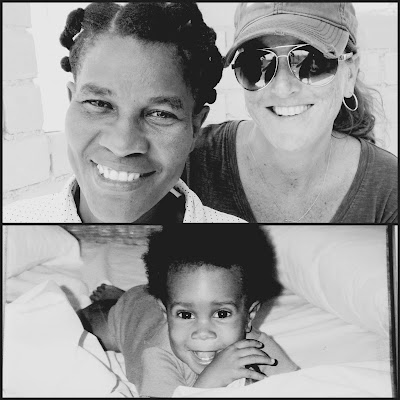 a couple of years ago we sat with isaac's first family visiting and asking questions about the beginning of his life.  on that day isaac's mom and maternal grandmother enthusiastically told him that he was born on the 7th of september, 2001.

up until that day we had been given september 11 and 18 as his possible dates of birth (differing dates on adoption paperwork).

adoption is complicated. you have heard me say that a hundred dozen times. for his first family, there is loss and i don't imagine the sting of that *ever* goes away.

for isaac, i am guessing most of the processing work lies ahead. one new piece of his story was brought into the light when he was given the chance to celebrate his correct birthday.

while is his passport and everything official reads septmber 18, we learned from isaac that this date his mother and grandmother confirm as the day he was born in wharf jeremie on the cement floor of his small home, is the date that matters to him.

we are celebrating today, on the correct date, for the second time.

watching isaac grown into his new 5'9" frame, and the distinct change in his voice this year has been quite something. He is still so filled with child-like wonder and joy ... his emotional development lags behind the physical - and none of us want to rush him.

thankfully, his sheltered little home-school situation with a teacher and classmates that love all his wonderful peculiarities means that nobody is picking on him for being perfectly innocent and in utter awe of all of God's creation.  (teasing on occasion, yes. picking-on him, no.)

today and everyday we are so grateful that isaac's mom carried him, gave him life, still loves him, and knows him. thank you, J, for the gift you have given this world. we remember you today. we have also learned that much of isaac's joyful demeanor and carefree approach to life comes from his dad. R, we celebrate the beautiful qualities you gave your son today. we are all blessed everyday because of those things you passed on to isaac. 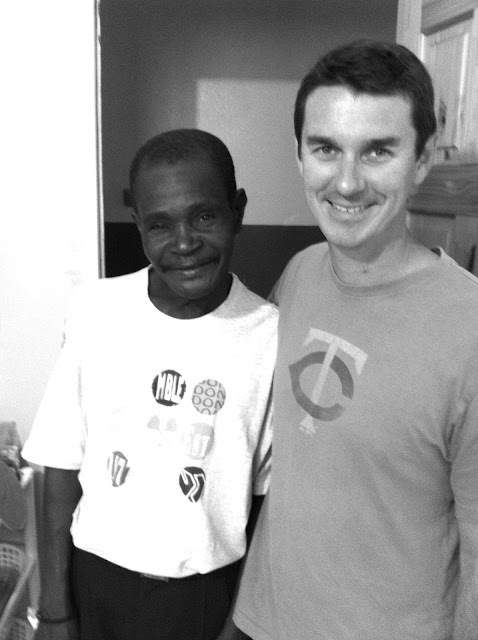 Happy 14th Birthday, Isaac. We hope you never lose your enthusiasm for life, your joy and wonder, your love of peace and harmony.
The world needs you, buddy.
We need you.
xoxo - ❤mom&dad and mom&dad
at Monday, September 07, 2015