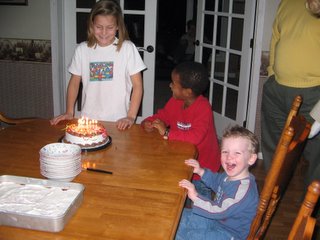 Since it is Paige's birthday today (11/30) I think I can get away with bragging about her. If you can't handle mom's who go on and on about their kids, now would be a good time to stop reading.

Paige has blessed each of us in immeasurable ways. Whenever someone new meets her they comment on her kind and loving spirit ... she just has this "thing" about her. Every year on the anniversary of her birth I reflect on how thankful I am that I had her, I cannot imagine our family without her! We love you SO much Paige. Like Isaac always says "God made you so special." We are amazed at the way you touch our lives.
All our love,
Mom, Dad, Britt, Ike, Hope and Noah
at Wednesday, November 30, 2005

Troy was going to report ---- but then by the time we finished talking he was ready for bed so I will quickly fill you in. He said other than almost missing the flight out of Minneapolis, the travel was very smooth.
He ran into a friend at the grocery store, a person that we have cooresponded with via email but never met so he walked up to her and introduced himself. He thought that was pretty cool ... small world, small country. She lives four hours from Port au Prince so it was neat that she was in doing shopping during the same 20 minutes that he was grabbing food before heading to La Digue.
He said that his creole is not what he had hoped ... he has been working on it. He was able to have dinner with a few of the staff and said it was a really nice time.
Today they were going back into Port au Prince to run many errands. Running errands in Port au Prince would be like trying to run errands all along interstate 94 during Friday afternoon traffic headed north ... you really don't so much "run" errands ---- it is more of a hurry up and wait sort of thing. I'll ask him to post tonight if he can. ~Tara
at Tuesday, November 29, 2005

Things Isaac MUST have in Haiti 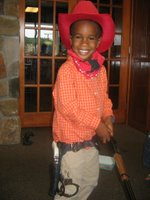 **List not complete. Isaac reserves the right to add to it at any time up until the day he boards the airplane.

Mark 14:24 When it looks like you should turn back -(stolen from Ron Hutchcraft)

Whenever you drive into Texas, the signs say, "Don't mess with Texas." One reason for that is the weather in Texas! Just watch the national weather on any given day from spring into the fall and you're likely to seethe color red - that's for severe thunderstorms or possible tornadoes.

Our son and daughter-in-law and granddaughter were driving across the Texas pan handle last Spring, and sure enough, they drove into one of those really nasty weather fronts. Amarillo, Texas, was behind them, New Mexico was ahead of them. The sky was featuring that special shade of tornadic green. The rain was torrential, and the clouds were growing those little fingers that sometimes turn into tornadoes. Our son decided it was time to call his brother and see what the Internet was saying about this weather. His question: "Shall I keep going or turn back to Amarillo?" The answer: "Just keep going, man. Twenty more miles and you'll be in bright sunshine!

"I'm Ron Hutchcraft and I want to have A Word With You today about"When it Looks Like You Should Turn Back."

It could be that your journey right now is taking you through a very dark and stormy time. There's danger, there's apprehension, there's questions about which way to go. And turning back or bailing out looks like it may be the way to go. But your Father in heaven can see the whole road.And today He's saying to you, "Just keep going. Drive a few more miles and you'll start to see the sunshine! " The danger is that you'll turn back just before the breakthrough;just before the answer to your prayers.

There's a vivid, real-life example of what that looks like in our word for today from the Word of God in Mark14, beginning with verse 24. Jesus has sent His disciples on ahead of Him.They're crossing the unpredictable Sea of Galilee in a boat when suddenly their boat is being "buffeted by the waves because the wind was against it.""Buffeted by the waves." Does that sound like a fair description of how you feel right now?The Bible goes on to tell us that "during the fourth watch of the night Jesus went out to them, walking on the lake. When the disciples saw Him walking on the lake, they were terrified ... But Jesus immediately said to them: 'Take courage! It is I. Don't be afraid.' 'Lord, if it's You,'Peter replied, 'tell me to come to You on the water.' 'Come,' He said. Then Peter got down out of the boat, walked on the water and came toward Jesus.But when he saw the wind, he was afraid and, beginning to sink, he cried out, 'Lord, save me!' Immediately Jesus reached out His hand and caught him.'You of little faith,' He said, 'why did you doubt?'"

You started down the road you're on by faith, counting on Jesus to get you there. And, like Peter, the wind and the rain and the waves are brutal right now. So you've stopped focusing on Jesus and you started focusing on your fears or what you can do, and you're sinking. People criticize Peter for losing faith, but he's the only one who had enough faith to even get out of the boat! Right? But, sadly, it was only "halfway there"faith - enough faith to get him halfway there.It's not the storm that's going to sink you. It's going to be"halfway there" faith.

If you decide what you're going to do based on the situation, based on what you can see, based on what you're feeling, you'll almost surely make a bad decision. It was Jesus who got you out of the boat in the first place. It was Jesus who helped you walk on water this far.And it will be Jesus who gets you the rest of the way there. So get your focus back on Jesus! His word is: "Let us not become weary in doing good, for at the proper time we will reap a harvest if we do not give up" (Galatians6:9).It's dark now. But don't doubt in the darkness what God told you in the light. He knows what you're going through, but He also knows what's ahead. And He's telling you, "Keep going! Before long, you'll be in the sunshine!"

We are starting this blog for the purpose of documenting our move to La Digue, Haiti.

We've never written in journals or done a very good job of keeping a history.  We hope this becomes a place where we can honestly share our fears, struggles, and triumphs as we attempt to grow and learn and walk where we think He is asking us to walk for the next year or so.

Please join us for the wild ride ahead.  Here we go!

We love Thanksgiving. It has always been my (Tara) very favorite holiday. I love that it isn't about gifts and high pressure expectations.  Gratitude feels good, I always wish it would become more of who I am year-round.

Troy is busy getting ready to go to Haiti next week. It will be a great opportunity for him to learn more about our job duties and get to know the people we'll be working with better. Britt is wanting to go with him, we just couldn't swing the extra ticket. Isaac keeps walking up to us with random items (such as a piece of Halloween candy) and asking "Can I take this to Haiti?" If he gets his way we will be bringing a whole bunch of old candy.

Prayer Requests- We are looking for a renter for our Zimmerman home and our Suburban is for sale.

HAPPY THANKSGIVING!
We are immeasurably blessed and grateful.
at Tuesday, November 22, 2005