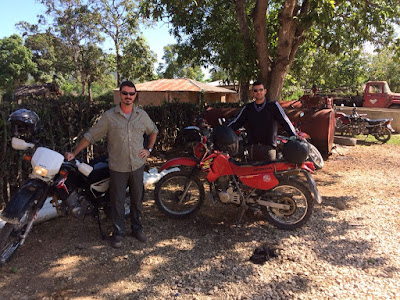 That is Troy on the left. Photo taken yesterday.

Lydia is an 8 year old. I am no math expert but 8 years of age is at least a few years from 15 years of age.

I don't know what concessions Troy has made so far-but I have some ideas for him.  For starters, when he arrives home he can rub the knots in my shoulders from the nervousness of the last couple days.

The blog entry below expounds upon my long and complicated relationship with motorcycles.

A Tale of Roast-beef and Defeat

We were saving money to pay for our wedding. The hotel that employed me as a catering sales manager was selling everything to me at cost, but still, we needed a few thousand dollars in order to host a classy reception after the wedding ceremony.

It was coincidental that I did not like motorcycles. (I am named after an uncle that lost his life on one.) It was coincidental that Troy (my groom to be) happened to own one. It only made sense to sell that death machine in exchange for dozens and dozens stuffed mushrooms, prosciutto wrapped anythings, and a handsome man in a white coat and tall hat ready to carve roast beef on demand.

People die on motorcycles. Nobody ever died from too much roast beef.

Two birds. One stone. No more scary form of transportation available to my fiancé  and money for upitty Hors d'oeuvres.

At that time we had no earthy idea what lay ahead. Maybe we knew we needed some cash, but little did we know that a motorcycle that carries only two butts would be the last thing we would need. Had someone said "Uh, little morons, the day will come when a basic mini-van will not even carry your family", we would certainly have laughed in their face.

Fast forward six years. We are now the proud parents of five children.  My precious husband began saying he really wanted to get another motorcycle to go to and from work and save gas money.  I threw an ever-livin fit.  No way. Not on my watch. Will.Not.Happen, I said.  "Do you want me to leave you to raise five kids on your own?"  No?  I didn't think so.  Case closed.

Sometime in the following year we moved far away from Minnesota and its entire three month motorcycle season. Discussion forever closed. Or so I thought.

Fast forward two more years. We are now the frazzled parents of seven children. We live in the land of unlimited and impossible traffic. "A motorcycle would get me places quicker and I would end up being home more", he said.

"Hmmm. Let me think. No. Not really. That would be true right up until you were not home at all-EVER - because you were dead," I replied.

We made an agreement.  When our youngest daughter, Lydia, is 15 years old - a motorcycle could once again be an option for transportation. Our kids would be mainly grown. It would be okay to drive around on a death machine at that point. We shook on it.

Fast forward to early summer of last year. There were so many things going on in our lives. Reviewing them would exhaust us all. I won't review.  Suffice it to say, Troy and his friends in Haiti sensed my fatigue and weakness.  They preyed upon a distracted, beaten down, stressed-out mother and midwifery student.

One day I woke up and we owned a motorcycle. I could barely recall agreeing to it, but somewhere deep in the dusty and cobweb-filled corners of my atrophied mind I recalled that I had sort of agreed to the purchase.

I "learned to ride it".  In fact I demanded that it be called my motorcycle. I figured, if we own this thing, I will be the one driving it. Things went really well in the driveway and up and down the paved street in front of our house. I was learning.

One morning after Troy had left with our kids, I felt pompy (read: overly confident) and started it up to head to the Maternity Center. The distance between my house and the Maternity Center is certainly not more than 1/3 of a mile, probably less. I exited the neighborhood we live in, grinning broadly at the gate man's surprise at seeing me on a motorcycle.  I rounded the first right turn, no trouble.  I took the first left turn with equal excellence and precision.  Just as I was about to make my last turn, the turn that brings the Maternity Center into sight, I heard the sound of a truck.  Because I could not see the truck, but knew it was coming, I panicked and over compensated by jerking the handle-bars too quickly.  The loose gravel beneath the tires didn't accommodate my herky-jerky movement and the back tire came around and out from underneath me.  Down in the dirt I went.  Exactly two people saw this happen.  I jumped up, pretended that wiping out on a motorcycle was my job and said "Bon jour - tout bagay anfom?" (Good morning - everything is in order?)  That is how you act uber cool to people that just saw you wipe out. Just like in Junior High when you tripped up the steps...as if they don't notice that your life is not in order, because of the crashing to the ground.

Living that down was not fun. My maiden voyage on 'my moto', a failure.  When Noah saw my hacked up arm, he threatened to "take that thing apart piece by piece if Mom ever rides it again."

We left the motorcycle behind when we spent those multiple months in the USA.  Now we are back in Haiti and I am still not really sure how we ended up owning this thing. Lydia is six years old. She is not fifteen.

I suppose I feel that this massive compromise on my part has gone unnoticed. Shouldn't there be a ceremony, some sort of commemoration, awarding me an awesome-compromising-wife medal? Something?

Since we returned to Haiti, there have been no new dramatic incidents to report on the moto. The other night, we took off to dinner and our daughter, Hope, snapped this photo.  It shocked me to see that I was groping (hard-core clutching) Troy.

If this is how I grab him when I ride with him, maybe I misunderstood the reason he wanted this dumb thing all along. 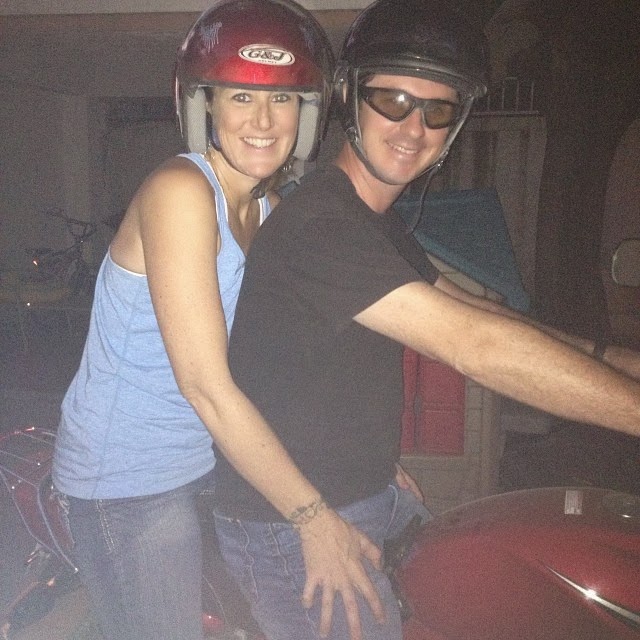 I figure if nobody else is going to award me, I will just have to self-award.

Until the next time we need a giant quantity of Roast Beef, you may see one of us around Port au Prince on these two fancy wheels; I call her Defeat.
at Tuesday, April 12, 2016