Last week I was in Deschapelles, Haiti again and it was great the second time around.  I learned a lot again, and also got to meet some new students that joined the class. 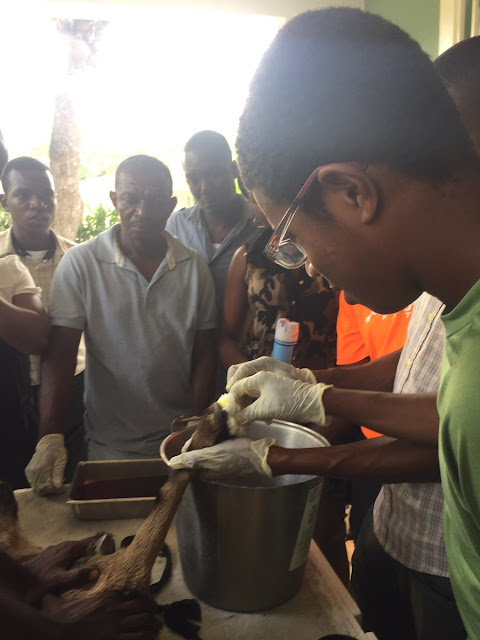 Last week we talked about diseases and epidemics in Haiti. It was really interesting. We talked a lot about how those diseases can spread and how to help the animals that get sick. Here are some of the diseases we covered: anthrax, anaplasmosis, babesiosis, and rabies.

In class we even discussed about two strange but enthralling diseases in Haiti that affect horses specifically.  Lagoum, which is a virus that spreads from horse to horse and kills. The other disease is Lampa. It is an inflammation of the soft pallet (the roof of the mouth) - this disease in particular is usually caused by a cut or a burn in the mouth. It is most common during the dry season.

With diseases, you have got to have the symptoms, so we also talked about the multitude of symptoms to go along with the diseases we discussed. For example a dog with rabies is most commonly known for having a foaming mouth.

I got to Dechapelles on Sunday evening and started class Monday morning. On Tuesday we had two guest teachers. Kelly Crowdis was the main professor for the week, she is a great teacher.  With our guest teachers we talked about rabies and infectious epidemics. They talked about how imperative it is that we vaccinate as many dogs as we can to prevent rabies.  It is in your best interest to not ever be bitten by a dog. You probably knew that.  Here is a fun fact, if you do get bit - you should immediately wash the wound with running fresh water and soap for ten minutes straight. That will decrease your chances of getting rabies by 50%. Isn't that crazy?

With epidemics we first talked about their characteristics, the quickness of the spread, the space or geographical area the epidemic occurs, and the duration of the epidemic. All this is crucial information because we would need to send all of this information to the government. They hopefully provide the country with useful prevention information and give warnings when possible.

Wednesday and Thursday we did a lot of hands-on work. We got to practice physical exams, giving shots, hydrating animals by passing tubes down their noses and throats, and we did a few fecal exams (that's looking for microorganisms in poop). I think that it is interesting looking at poop, but only if you find stuff in the poop.  We put the poop in a beaker thing and add solutions to it.  Then you put it on a slide before it goes on the microscope.

The most enticing hands on thing we did was to dissect a goat. It was SUPER cool. We got to see how everything would work in the body if that animal were alive. With gloves I got to touch and hold a lot of the goat's organs. I even got to hold shut an artery that was cut open. There were a lot of slimy and mushy parts. Many things looked the way I expected them to look. The thing that I was shocked by was the stomach. A goat is a ruminant, which means it has FOUR stomachs.  Can you image having FOUR stomach aches at once? The rumen, the reticulum, the omasum, and the abomasum are the four parts. It amazed me how large these four parts were.  After the dissection we each got a section of the goat to practice doing suturing.

I got the back of the goat.  We practiced suturing torn muscles. It smelled very bad. Before we started suturing we used scalpels to cut the fur off around the wound we practice stitching. It was a lot of fun.

One day we went on a field trip to Ti Rivere. Oh my gosh! It was so amazing. The fields of emerald green grass and the land teeming with banana trees was beautiful. It got even more beautiful as we approached our final destination. At the top of the mountain there was an old fort that the Haitians used to fight off the French. From the fort we got a panoramic view of the fields and green trees and the river. In the background we could see the abundance of mighty rolling mountains and hills. Honestly, it was one most beautiful things I have ever seen in my country.  It looked like a place that National Geographic would put in their magazine. I was in awe. I hope to return to Ti Rivere on one of my future trips north.

Overall I think I enjoyed my second week in Dechapelles even more that the first. I was more comfortable with the environment and the people I was working with. There was more action and less sitting. Seeing that beautiful part of Haiti was a gift to me.

Sadly, I won't be able to be at Vet camp in July or August because I will be in El Paso, Texas seeing my big sister and nephews and taking Driver's Education for a month - which is also a good thing. I wish I could be two places at once.  I look forward to the September class and I will write again after that week.  I am excited for the summer I have planned and anxious to meet our new teacher later this month.  I get to meet my new teacher June 29th and I get to go to America July 9th.