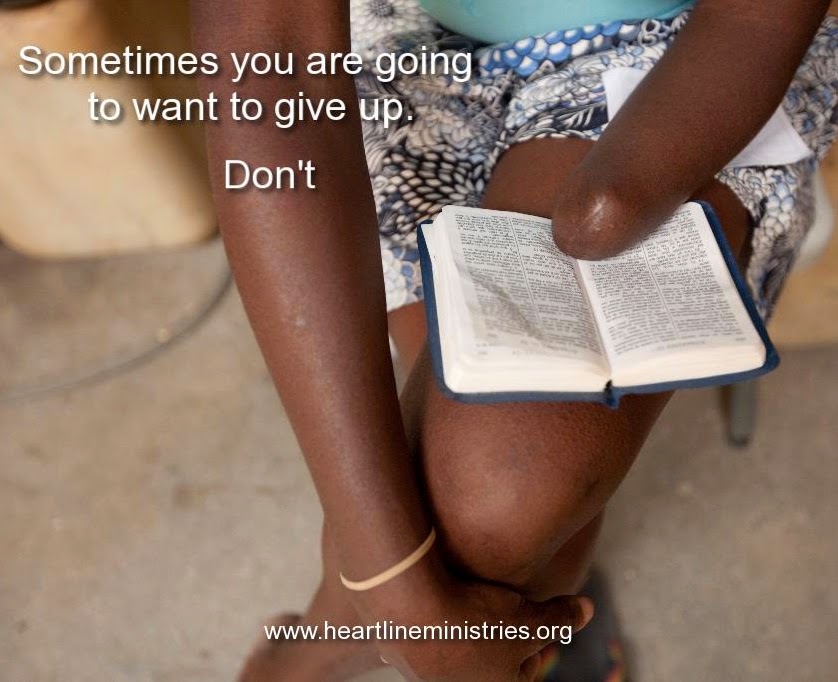 Today I read these words,


"Fear does not prevent death. It prevents life."  (Naguib Mahfouz)

I don't know why such simple words (obvious words?) spoke (screamed?) so loudly to my heart and soul, but they did.

I have been afraid of a handful of things the last couple of months. Among other stuff, there has been fear of my fast-approaching final test, and fear over our kids and the various things going on in their lives. Lately, much (like way too much) fear energy has been expended on this dang illness in Haiti. I have been holding my breath for weeks hoping and praying that my little ones and the brand new babies at Heartline and the momma on bed rest would somehow be spared.

When my kids get ill here, there is so much condemnation spinning in my head. I know it is meant to discourage me. The messages and accusations say, "If you didn't bring them here, they wouldn't have this." My rational side knows that car crashes and illness and freak accidents happen to people that never leave the safest house in the safest city in the safest place in the world.

Troy did enough counseling when we were in the USA to get super duper wicked smart. I have seen him forget some of what he learned on certain days, so don't hear me elevating him to the very highest pinnacle. He is like three steps down from the highest spot. Recently when I was angry at a situation I asked him if he was upset by someone's unkind and disappointing response to him, he said, "I am only responsible for my actions, my words and my responses. She is responsible for hers, and I cannot change that and I shouldn't try."

Maybe my issue is that I am wanting to control more than just me. By holding onto my fear so tightly, I am taking false control. That would explain the exhaustion of late.

Here is a simple reminder for me (mainly me) and you - if you were looking for a reminder that is: We don't have control over anything but our own responses to the things, situations, people, and stressors around us.

Sometimes we are going to want to give up.

(Photo taken by Esther Havens of our friend, Marjorie, who has not given up.)