As an adoptive parent that has made advocating for birth-family rights a regular part of my battle cry, I have learned over time that some adoptive parents don't want to be asked to think about the birth parents of their adopted children.

I am not sure why that is, my guess is that it is painful and difficult -- and avoidance of pain and difficulty is a thing people do.  (No, not a detective, just keen deductive powers.)

Last year we bore witness to a corrupt (American) woman processing adoptions in Haiti and asked for accountability for dishonest practices and fraudulent acquisition of children for international adoption. Following speaking up about it, false stories circulated and six or seven adoptive mothers wrote angry emails informing us we were being used by the devil to destroy international adoption. (Gah!)

That was a difficult time, because, who wants to be falsely accused or loathed? As it turned out, multiple children had been wrongfully removed from birth-families.

In the end we looked at the lives of the Haitian families all around us and recognized that someone needed to stand up for their rights. They don't have the money or the passports or the social media or the voice or the state senators.

Recognizing that not everyone automatically thinks it is important to empathize and understand the feelings and experiences of first-families, I am still pushing for all adoptive parents to do just that. Our desire is to continue to encourage adoptive parents to bring the Kingdom of Heaven to earth by listening to the stories of grown adoptees and first families, by learning about unjust practices and by being very concerned with adoption ethics. Additionally, we must all investigate the agencies we partner with and be vigilant as we gather information.

What has been done in the adoption business in the past, and what continues to be done in some instances and countries, is unjust. It is challenging to take on the burden of this injustice without trivializing anyone's suffering. We need to try. I think we often don't give credence to the fact that there is a burden to bear here.  There is not a single narrative; someone gains, someone loses, someone has litte to say about how it plays out.

This movie (and the true story it is based on) is a must see for adoptive parents.  It exposes systems that have taken children from mothers and the multi-faceted fallout of this injustice. In the movie it is the Catholic church in Ireland taking babies from teen mothers. This still happens, in a different context, but under the same umbrella of coercion and shame and exploitation of a mother in crisis.  It has long finished its run in the theaters and is available for purchase. You won't regret taking the time to view it.

This movie is beautiful and redemptive while being truthful, and immensely sad. 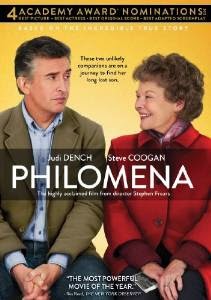 Quoting two articles on the movie...
"You can't go through life being so unyielding ...so you've got to forgive," (Philomena) Lee said of how she was able to keep her faith. "You've got to. You just have to forgive." On stage at the Golden Globe Awards last month, Lee said the film with her name wasn't just about her."It's the shared story of the women who have yet to receive the justice they deserve," she said, referring to many unwed Irish mothers who also had their children taken from them and who want to find out what happened to them.   (Source)
The book also helps dismantle the stubborn myth that silence is the best policy: that children should be sheltered from the facts of adoption, and that love and material comfort will conquer all. Adoption mores have certainly evolved over time; today, adoptive parents often keep in touch with their children’s birth families.  (Source)
at Tuesday, August 19, 2014