When I was in Texas a couple of weeks ago to see that delicious little grandson of ours - (Doh! - I mean - to see our big girls and their husbands and my Mom and Dad ... then of course that baby too, if at all possible) - I had a massive technology failure.

A few weeks have passed and I am ready to talk about it now.

I arrived to DFW with my two spunky little girls and a plan to meet a friend that would hand me drugs. (Medicine for a diabetic woman in Haiti. Come on.)  When I got to the baggage claim area and turned my phone on to find out where I would meet the friend, only the voice of Siri or a woman that was pretending to be Siri came out.  The voice kept reading the home screen over and over and over to me.  "The time is 10:28pm".  Each time I tried to put in my password it would just tell me out loud what numbers I was pushing, but not ever unlock the screen.

Like all of us do when we lose a vital organ, I began to panic.  How soon before I bleed out, I wondered!? How can I call my friend? How can I find my friend? How will I get to my daughter's house without that phone? What about the calls I promised I would make while on the long drive tonight? How will I remember which car-rental company I held the car with earlier? Where will my next breath come from?!?!?!

I could continue to lay out for you every massive mountain of challenge I climbed without my phone, but I will spare you further detail and just skip all humility and tell you about my heroic ability to continue on in the face of all that affliction.

Not only did I find the friend,  I rented a car and drove from DFW to daughter #1 without a map.  After that, I drove from Dallas to a city three hours away totally unassisted by Google Maps or a phone that is smart.

The next day I was trying to make it Troy's fault for sending me with a faulty phone to use in the USA and like he is known to do, he wrote a list of instructions detailing how I (read: Paige) could go about fixing it.

I handed the instructions to Paige.  She sort of half-tried to follow step one and then she told me that his instructions included hitting the home button three times and that I did not have a home button.

Huh.  Well.  Okay.  So that is done then. No fixing a phone that has no home button. Easy go, easy go.

When I got home a few days later Troy turned the phone on, confirmed that yes indeed it was jacked up.  He then fixed it in .4 seconds by hitting the home button.   He has gone on to share this story with a couple of my friends in order for them to be able to mock and scoff with him. If my 20 year old says I don't have a home button, who am I, a 43 year old dinosaur, to disagree?

My husband wants to focus in on the failure of not fixing the phone and also in believing Paige without question. That is not how this is going to go down. I am cementing this in history as the story of my bravery and ultimately my overcoming in the face of much adversity.

A few kid other things I don't want to forget, so recording here...

On our way to Texas we had a long layover in FtLauderdale and shopped for a little bit. The girls asked if they could please go to the bathroom together without my help. We almost never allow them chances to test independence in public places in Haiti so I said, "Yes, you can if you stay together. If anyone gives you any trouble one of you fight and one of you scream and I'll come quickly." The girls said "okay!" and took off for the bathroom. I went back to looking at the rack I was standing near.

A few seconds later Lydie (half way to bathroom door) spun around and yelled back toward me, "Ma? I'm gonna be the one that fights, ok?!"

I really don't doubt it.  Phoebe and Lydie are only 11 months apart in age. We are anxious to celebrate the birth of our Phoebe girl very soon. 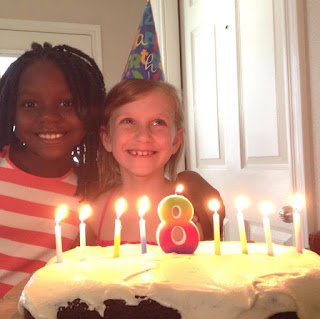 This morning began with hysterically upset Phoebe. When we were in Texas for the birthday celebrations I bought her new underwear with the days of the week on them. She is MADLY in love with this new system of underwear organization ... takes all the guesswork out of choosing in the morning.
Well, Chestnut the ShiTzu ate Friday's pair. Phoebe discovered this today when she woke up. She dramatically explained how much this is going to ruin tomorrow and possibly every Friday for eternity for her. If you had heard her, even you would be convinced this is a HUGE problem, from which we may never recover.

I (somewhat teasingly) suggested that we could just write Friday with a Sharpie on a pair of old undies. Tonight she came and handed me a sharpie and these underwear. Apparently my solution is actually better than wearing a pair that doesn't designate what day it is.  (Yes, she wore them and the marker survived the wash to live to see another Friday.)