Perspective: We Can Do Better

~A man walks up to the gate agent  and begins to express frustration with his flight delays.  He begins to talk louder and use his hands.  The agent decides his style of communication is a threat to her and calls the police.  The man is taken away from the gate and not allowed to fly that day.

~A group of men sit on their motorcycles at the busy intersection.  They chat and laugh  and watch traffic going by as they wait for potential customers to arrive.  A carload of visiting Americans driving by sees all the men gathered in a group on their motos and says, "This motorcycle gang seems dangerous. Why are they here?"

~Sarah is out for a morning jog in rural Haiti, in the distance she sees a man walking toward her with some sort of weapon in his hand.  She is alone on a run and becomes fearful. She turns back to run the opposite direction rather than passing the man on the road.

~We receive an email, explaining that an American family in Haiti is in need.  The email went on to explain that the family needs to leave Haiti before the elections later in October, because the country is dangerous - even more so during elections.  The family is raising a lot of money to get out of Haiti.

~The man at the airport was communicating in a very Haitian way.  Haitians can be quite animated in their communication, one minute you might observe two men having what appears to be a very heated conversation, the next minute they have their arms around one another and they are laughing their heads off while embracing.  Our observations of their communication is rooted in our own paradigm.  The gate agent was never in danger, no threat was ever made.

~The men that sit at the corner are trying to make a living by driving moto-taxi.  They wait at a busy intersection in order to find customers that need a ride.  They laugh, tease, debate, and enjoy each others company while they wait on the next customer. They are not a "gang" and they simply hope to make a few dollars today. 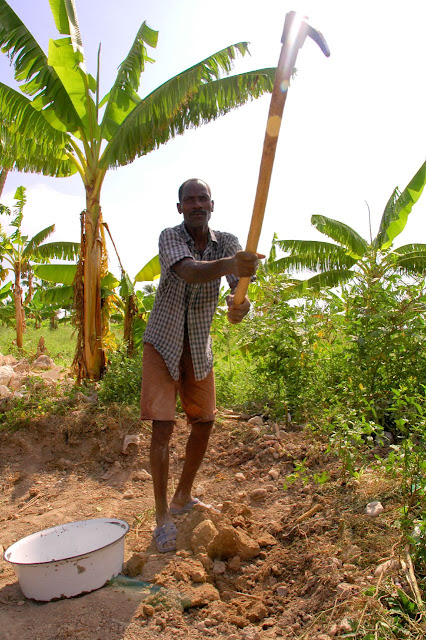 ~Sarah was new to Haiti.  She didn't realize that everyone in rural Haiti owns a machete. It is used for dozens of things, including working in the garden.  What Sarah saw as a threatening man, was really just a hard-working guy headed to his field to work.

~It is not so dangerous in Haiti that anyone needs to evacuate due to election season.  Like any place in the world, things can and do happen ... But, to suggest that staying in Haiti this month is unsafe is over the top dramatic and also untrue.  Sensationalizing things in order to fund raise hurts everyone in Haiti.

Sometimes, as a family living and working long-term in Haiti, it becomes clear why there is some animosity toward foreigners.  Over the years the volume of people that have come here and misused funds, left their employees and vendors unpaid, and entered into inappropriate relationships or chosen to do things they deemed "helpful" while never asking, "What would be helpful?" is utterly mind-numbing.

We grieve over the things that have been done here that have hurt Haiti and her people. If we (expats) are all to be grouped together and seen as a whole, it makes a lot of sense that many would look at us and judge us unhelpful, annoying, and even offensive and harmful.

Haiti does not need the media or visiting foreigners/humanitarians/missionaries to stir up drama for their own attention, fundraising, or sales.

I think we can ask for better.

I think we can do better.