All Glamour All The Time 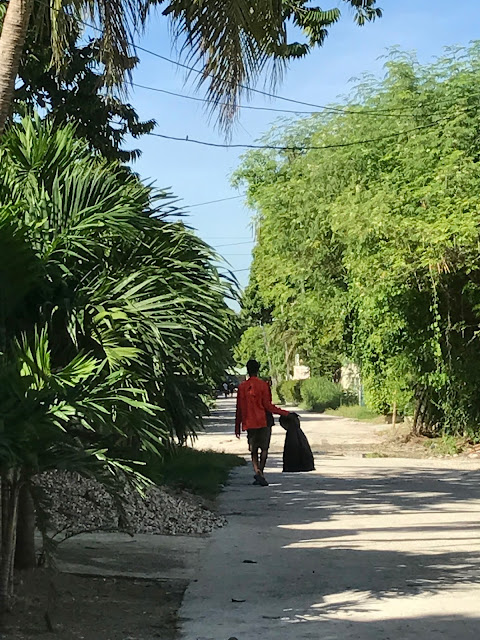 I sent Isaac down the street with the dead cat that sunrise of Monday morning revealed to us.

I suppose getting rid of the cat on Monday or Tuesday would have been a nice idea, but Troy did not choose to facilitate removal in a timely manner, therefore I stepped in to manage the situation.

Somehow the same Mastiff that was septic and just about dead only one week ago, managed to end the life of a cat while we slept Sunday night.

It seems as if Hazelnut the Mastiff feels better.

As I watched Isaac walk away with the bag extended far from his body, I thought, "Well, there goes Isaac, down the street with a dead cat in a bag.  That's real weird."

Back in the 80s in the sixth grade play at Park Brook Elementary School, I played Becky Thatcher. I wore a dress my Mom sewed for me and one of my two lines was, "Whatcha got in the bag?"

Tom (or maybe it was Huck?) says, "Dead cat", to which Becky Thatcher says, "Watcha gonna do with it?"

My Dad used to love to repeat my two lines in the sixth grade play over and over and over to me.  Used to, as in on multiple occasions over and over for the last for 30 years. I suppose he did so because mockery is our love language and because it was my theatrical debut and who can forget such thespian grandeur. (?!)

As it turns out, my role as Thatcher was not only my debut; it was also my swan song.

The trash man signed us on as new customers very recently and took three months payment as a deposit knowing full well about the placentas that were to come. These other items are bonus items. I think he is probably really really glad he landed our business.


~    ~    ~
Completely unrelated to rotten uteruses and dead cats, last night Noah puked a far greater volume than his stomach could ever even feasibly hold.  I don't understand exactly what happened there.

He woke me up around 12:30 to tell me. I fumbled in the darkness and found some glasses. Lord knows I wouldn't want to miss seeing his stomach contents.

As I was cleaning it up and stripping the bedding he held his tummy with one arm and his nose with his other hand and asked me if maybe he should do the cleaning.

I convinced him I was born for the work of vomit clean-up and he need not apply for a job I excel at and have decades of experience performing.  I finished stripping the sheets and left the worst work of removing the chunky parts for the morning.

Rest assured I sprang from my bed this morning, excited to finish the job and get the sheets into the washing machine.

Wednesday can only be described as wonderful when it begins with the smells of dead cat and vomit.

Moments ago I sat down after waving Troy and the three kids that were not walking a dead cat down the street, and not lying in bed sick, off to school.

I picked up my coffee, sighed deeply at the bizarre nature of life, and scratched my neck.  As I did this, I found, perched upon my clavicle,  an identifiable chunk of the contents of Noah's stomach.

It is all glamour all the time, this life.