Life and the Saving of It

Yesterday Troy saved a man's life. To be clear, I mean exactly that.  A man is walking on his two legs around Port au Prince thanks to Troy.

Last week when Troy was in Seattle the kids came home telling us that a man had been hitting on Hope.  They shared some details, including the fact that he had been bugging Hope to give him her phone number. They said that he spoke English and hangs out when possible around the kids’ school. Isaac, who misses about 80% of social cues and body language things and such said, “I totally see him staring at her butt a lot.” 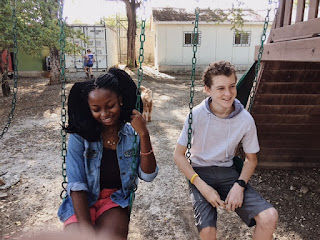 Isaac noticed.
This is serious.

At the MC we have a fake male part that is used to teach how to put a condom on correctly.  We told the kids we would show up with our fake male part and explain to the guy creeping on Hope that the last guy that wouldn’t take no from Hope is now our condom model.

The kids howled with laughter and asked us no less than 25 times if we were really going to do that.  “Of course we are!” KJ said.

(I can neither deny nor confirm how serious we were about this idea.)

We missed two chances to get over to the other property and see our plan through. Life here is busy and sometimes it takes a long time to make a plan into a finished task.

Troy got home from Seattle and didn’t like our plan.  He said that would cause a mission-wide stir and it might not be too good for overall morale and such.

He said he would "calmly" handle it.

Yesterday Troy sent a text message to say he had spoken to the guy and to confess he wasn’t as calm as he had originally planned to be, but it was in-fact handled. The adult man understands he is not to bother Hope any more.

These are the sorts of things that happen frequently that I don’t write about.
I am supposed to be some sort of an ambassador for Jesus and that probably does not include threatening a man that he is about to lose his member if he talks to my 15 year old again.

Culturally, there is all sorts of grey area about what is permissible and what is not. I have met mothers that do not at all mind if a 30 year old is pursuing their 15 year old and I have met Moms that find that abhorrent.

I can tell you that the Director of Heartline made it clear that whatever age gaps (for romantic pursuit) might be appropriate sometimes in Haiti -- those are not applicable to the Livesay Family. Like ever.
at Tuesday, November 07, 2017