First we form habits, and then they form us.

Recently I've been thinking a lot about how we respond to injustice. I'm not thinking only about giant systematic injustice; you know, those things that feel impossible. I am also considering the things that are unjust on a smaller scale too, the things we see in our everyday lives.

I've been noticing that sometimes when you take a stand against unethical or immoral behavior, it is fairly common to have a handful of Christians telling you that you are wrong to talk about it. You should have stayed quiet, why didn't you follow Matthew 18 and lots of other things along those lines. (Typically private confrontation was tried and failed, but those that hate public discord or confrontation cannot necessarily be bothered with those facts.)

More than two decades ago the church I grew up in went through a giant scandal when I was a teenager. Multiple victims surfaced to say that they had been sexually abused by the 20-year pastor of our congregation. It was a horrible shock and not surprisingly it destroyed many relationships when the news broke. Some people tried to find ways to try to keep it quiet and in so doing they said to the victims, "Our church reputation matters more to us than you." Other people worked very hard to get to the truth, to expose everything, no matter how embarrassing and horrifying it was. (the second group - those are my people)

In the spirit of transparency, that entire saga at my former church very much shaped me and my responses to injustice, whether the perpetrator professes to be a Christian or not. I always feel fierce anger at dishonesty and cover-ups of bad behavior and injustice.

I had planned to write a lot of my own thoughts about the topic, but I recognize that I'm angry at some specific things right now and it comes across in my communication. That to say, I should write less.  All of these thoughts led me to pose this question on Facebook last week, the responses are thought provoking and interesting.

"Agree or disagree? "Every time we witness an injustice and do not act, we train our character to be passive in its presence and thereby eventually lose the ability to defend ourselves and those we love." Do you think there is truth to this?"

Privately, I got a response from our friend Josh, a Pastor we know in Texas. I am quoting a few portions of his response below. (I took some portions out, which makes it jump around a bit.)

"One of my overused mantras is that without transformation there is not salvation. CS Lewis offers a beautiful image of eschatological judgment in book 7 of the Narnia series. I’m paraphrasing, but he essentially says that everyone came before Aslan, there was no choice about that. And they were all filled with fear. Either that fear turned to adoration and they went to his (Aslan’s) right or that fear turned to hatred and they went to his left. What I really like about this allusion to Matthew 25, is Lewis’s theological suggestion. In the scene it strikes me that individuals are judged not based on what they believe or say, but on who they are. And who they are is who they have become through a million choices made over the course of their life. A more explicit way to make this point is in when in the Great Divorce, Lewis says in the end there will be two kinds of people. Those who say to God "Thy will be done", and those to whom God says, "Thy will be done."
"Those million choices we make that form our character range from how I love my wife and children to what I choose to think about someone when I’m angry at them to how much and what kind of food I consume. Repetition of these choices carve out a disposition within me that eventually defines me."
"All choices are important but we’d be silly if we didn’t acknowledge that large motif in the biblical narrative especially the new testament is God’s concern for the marginalized."
"At our church we have been taking that slow journey with Luke from Galilee to Jerusalem. The church has historically assigned one of the four images in revelation and Ezekiel to the each of the gospels. Luke is given the image of the ox, both for his pace and because Jesus seems to have this yoke around his neck carrying the concerns of the poor. Or as missiologist David Bosch says, “Luke is a gospel for the poor and the rich."
"... That parable of the rich man and Lazarus was a common type of parable in Jesus’ day. In most versions of this parable where there’s a great reversal of the poor and the rich, the rich person in hell is permitted to go back and warn his friends and family. But in Jesus’ surprise ending the rich man isn’t. Here’s what Jesus says in v 31 He said to him, “If they do not listen to Moses and the prophets, neither will they be convinced even if someone rises from the dead.”
"In no small stroke of irony Jesus would in fact come back from the dead. Here’s my take, the one miracle even the God of resurrection can’t do, is to overcome the apathetic heart. I think this is probably a good reading of blaspheme of the holy spirit."
"So … to your question, yes the continued decisions of apathetic response is not only dangerous, but potentially damning...In short our choices are exercises in practicing eternity." 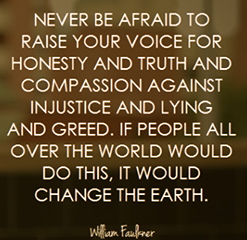 In hindsight I did not word my question well and I should have more carefully thought about it but the responses were interesting and challenging in spite of the sloppy question.

I am stuck on the idea that our responses become our habit and that sometimes our habits make us passive and even apathetic toward injustice. Apathy is problematic and is a difficult thing to change and overcome. I know that many would disagree with me on that, but that is where I landed.