Better Than a Light and Safer Than a Known Way 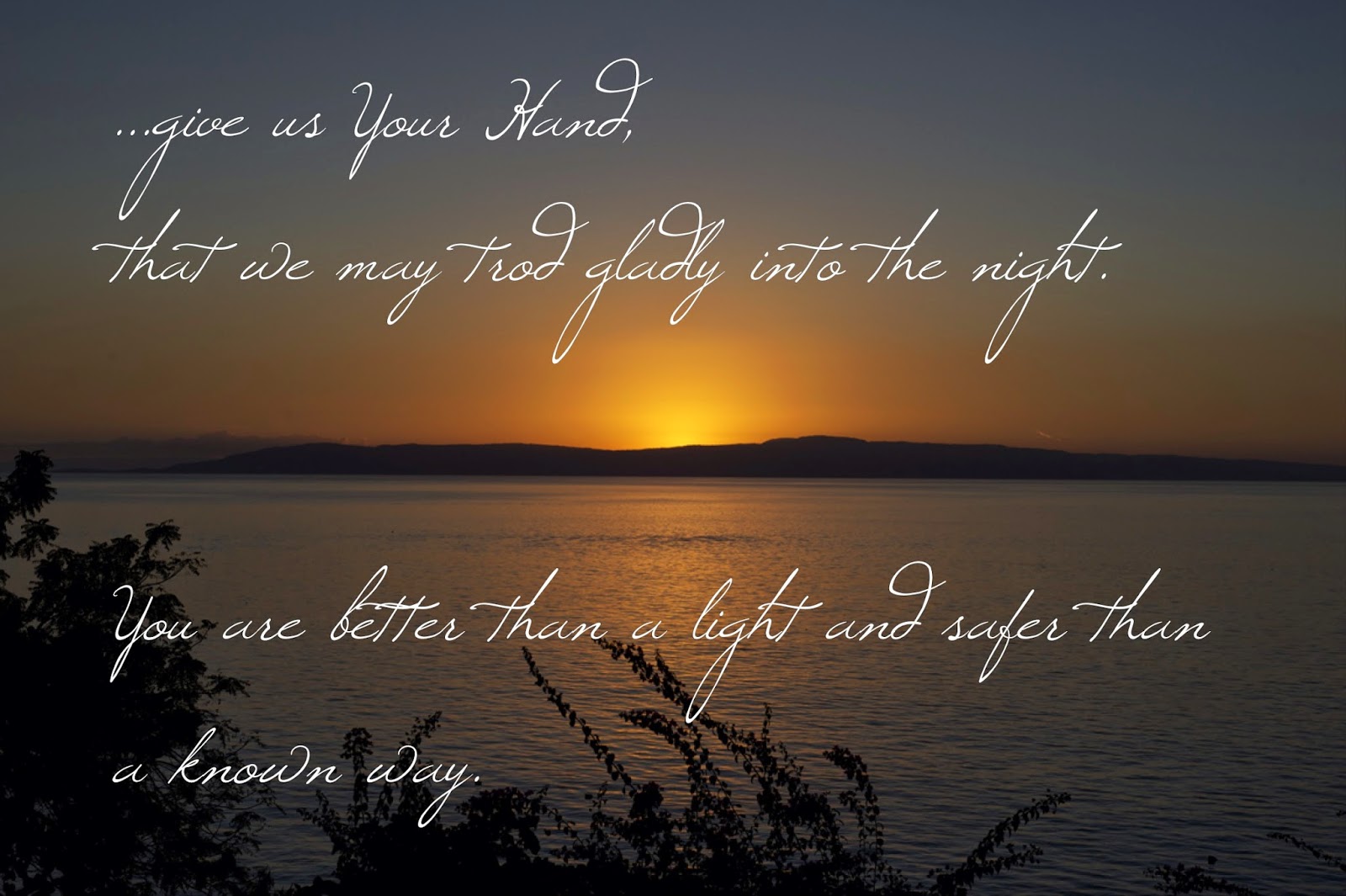 This year began for us when we headed home in January to Port au Prince after settling our second oldest daughter, Paige, in Texas to begin college. Technically speaking, all years begin for everyone in January. Clearly, I am a calendar expert. We returned home after taking five months away from life in Haiti at the end of 2013.

As we flew toward the island we love, I declared this portion of a poem my prayer and hope for the year:

And I said to the man who stood at the gate of the year: “Give me a light that I may tread safely into the unknown.”


And he replied:“Go out into the darkness and put your hand into the Hand of God. That shall be to you better than light and safer than a known way.”

Not unlike years past, we entered 2014 with hopes and goals and earnest prayers. My weightiest prayers and concerns are usually for content, healthy, growing, and safe children. Because I have seven of them, and two of them are now very far away, my prayer life can sometimes get hyper focused on them.

I have been parenting for twenty-four years. There are things I would love to go back and re-do and things that I know I got right. In all these years nothing has surprised me quite so much as the change that takes place in our role as parents when we transition children from living under our roof to living on their own.

It seems like people do this regularly and they even live to tell about it. I don't know how you did it, but my hat is off to each of you. You are truly ninja hero-warrior-let-goers - all of you!

Troy and I travel in circles of friends that are all mainly 33 to 40 years old, none of the closest friends in our age group have grown up kids yet. We are going first and they are all looking at us for advice and a "how to" guide.  We are glad to be done with diapers but we are far from being able to provide them help.

Friends, we don't know anything. There is no guide. Stop looking at us.

My friend Jamie wrote about this big-kid stuff recently. She was pointing out that all the quotes and blog posts written by mommies are about little kids. She said:"There's a reason there aren't very many blogs from Moms of teens. It's because as they grow, they become like a magnifying glass to all your fatal flaws and the myriad ways you screwed them up as children. Who wants to read about that?! It's depressing."

I think she is onto something, here.

Our kids become us, the very best and the very worst of us.

Maybe that is why letting go is so hard, we are letting go of the unfinished work of ourselves.

The fact is, we have to let go before it is finished  - because it is NEVER finished. I am not finished. You are not finshed.

Many years back Paige coined a phrase that simply meant "wow, that sucks".  In the weird and unique words of the six year old Paige,  this never being finished thing, "is a LarryGeorge Bummer."

I find that the line between letting go (that whole give them roots and give them wings song and dance) in a healthy way, and offering too much advice, guidance, cautionary warnings, etc, is a razor thin line.

Razors cut if you aren't careful.

Sharing life on the Internet is risky business. It is also a LarryGeorge Bummer at times. Choosing how vulnerable you want to be is tricky. People assume that they know everything there is to know if they simply read a blog or follow a Twitter feed.  As if sharing one deeply personal thing means all writers share all the things going on in their lives.

One criticism of all social media is that it gives us a false sense of the lives of others. People don't use their 140 characters to say, "My spouse is being a crazy person and we are fighting this week." There is not a lot of, "I don't have money to pay my bills and I am afraid", or, "My kid has stopped communicating with me and I feel really sad and scared." There are some that put a bit of that variety of "real" out there but after a while they learn to regret being vulnerable in the unknowable endless space such as the interweb and they pull back.

People want to find connection. We are people that want to be heard and understood. I think the discontent with social media stems from the truth that there is more connection to be found in hearing that someone you know is experiencing a similar struggle, than there is connection to be found in seeing a perfect, airbrushed life filled with humble brags about the latest house project, perfect family vacation, or job promotion.

I figure sharing the highs and the lows, the celebration and the challenges, while risky, is still a worthy endeavor. Life is not easy for most of us and perfect is not a thing either.

As I started reflecting on these first months of 2014, I looked up the rest of the prayer that kicked off our year. I found that these words followed what I had previously read ...

So I went forth, and finding the Hand of God, trod gladly into the night.

And He led me towards the hills and the breaking of day in the lone East.

So heart be still

What need our little life  -

Our human life to know,

(the beginning of the poem,"God Knows" - by Minnie Louise Haskins)

"So I went forth, and finding the Hand of God, trod gladly into the night."


The "gladly" part may be a bit of a big stretch.

We went forth though, right?

One night early this year  I had a long layover in Dallas on the way home from a midwifery class I took. My oldest daughters and my Mom came to spend the night with me in Dallas. As I climbed into bed in the darkness, Paige said, "Mom, I need to talk to you." I asked, "Oh Paigey, why did you wait until I turned out the light?" She replied, "Because I don't want you to see me." She went on to share with me the fresh news of her pregnancy.

I can share this now, because we have all worked through a lot. This news took time to digest. We were afraid for her.  At the same time, we were so thankful for her honesty in telling us. We were happy and we were sad. We were upset and we were relieved.  We vacillated between sane and not so sane.

Mercifully, in the last few weeks most of the fear has lifted and hope and joy have replaced those initial reactions.

In this year that we prayed, "Give us a light that we may tread safely into the unknown", but instead we were told to go forward without the light, simply placing our hands in His, we have experienced something pretty remarkable.

Even in the darkness, when we cannot see or anticipate what is coming next, we have been able to plod along, step by step, waiting for each unknown thing to be illuminated and known as we need it to be. When we turn and look back, we are able to see God's provision and Goodness to us on the mysterious winding path.

I was surprised by how long the grief had me in its grips. I recognized that I thought I could save Paige from ALL pain or choices that would make her life more challenging. I identified that it felt like failure that I had not saved her from it. Guilt consumed us. The grief had so much to do with things that were and are not even true. I wanted there to be protocols and steps to follow to immediately know what to say, what to do, what to feel next.

I am here to tell you, no protocols exist. Walking into it, begging God for His grace, is the only way through.

Paige deserves all the mercy and grace and understanding and support we can offer. She will fly. She has been a foster momma to many little ones in Haiti and she will be a spectacular mom to her little one. I needed to stop being afraid for her and harness the energy I was wasting on fear. We are all throwing our energy into walking along side her and giving her our support and love, that she might tread safely into the unknown ...We are going into the darkness with our hands clasping hers, and our hands in His.

That shall be to us better than a light and safer than a known way.

We are excited to share with you, coming October 2014, a wonderful little baby person to the world outside and to our family.

Pray with us for our first grandchild and for Paige and her boyfriend Michael as they prepare and pray and plan and for their future.

With less fear and more love, anticipation, and hope,


Postscript
*While we were in Texas for those months last year we spent a lot of special time with family. Being near Brittany and Christopher (our oldest daughter and her husband) and getting to do some vacations with our extended family were the highlights of those busy months in the USA.  One night we sat around playing games and discussing the prospect of becoming grandparents. Together we determined that better names than Granny and Grandpa needed to be sought out, chosen, and made our own long before we ever needed them. We are too young to be called those names, or so we decided. We began the long and laborious Internet search for the perfect names. I may not have accomplished some of the midwifery study goals I had for the time in America, I didn't read enough books or memorize enough medical terminology, but we chose our future grandparent names and that is obviously SUPER-DUPER important, and as it turns out, we needed to accomplish that task.

**Sharing this news with the younger siblings was so interesting. Each once responded as we might have expected. While Noah was grieving and worried Paige wouldn't be a sister anymore because she would be too busy being a mom, Isaac was saying, "EPIC, I want to be called only Uncle IKE, not Isaac. Doesn't that sound SO cool!?!?"   Hope was asked how she felt about things by a friend of ours and she said, "I am a little worried for Paige but our family does second chances." If we cannot save our kids from consequences or pain, we can at least teach the grace of second chances. Maybe that is the entirety of the "How-To" manual we will send to our friends.