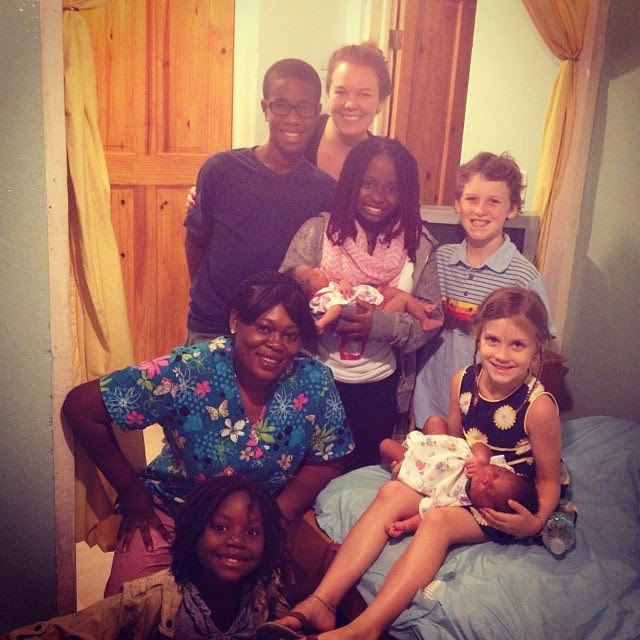 One night we were getting ready to pray together. When we do this, Troy has the kids share if there is anything or anyone on their heart to pray for and we chat a bit before we pray.  Sometimes it goes really well and other times it is a competition of who cares the most about the most people and can come up with the most random requests. If Noah names six things, Isaac will name name seven and Hope can surely think of at least eight.

Prayer requests as fodder for sibling rivalry, who knew? We openly admit to saying "alright, enough already with the prayer requests - stop!"

On that night, before we prayed we read James Chapter 1.  We read the first 18 verses without any commentary from the peanut gallery. Sometimes with the two littlest ones around nobody is really even listening, for that reason we read for just a short time.  Normally we would have stopped long before a 19th verse but Isaac had gone to the bathroom with a tummy ache and Noah said "keep going".

At Noah's request we read more.

19 Understand this, my dear brothers and sisters: You must all be quick to listen, slow to speak, and slow to get angry.

20 Human anger does not produce the righteousness God desires.

21 So get rid of all the filth and evil in your lives, and humbly accept the word God has planted in your hearts, for it has the power to save your souls.

After verse 21 Noah raised his hand to stop us and said, "Mama that's me. I get angry quickly. That is for me."

Troy and I looked at one another.  Did a stinkin' little kid just recognize his own tendency toward quick anger? Did he just call himself out?  Did he just own his issue? Did he just show up two-thirds of the adult population? We high-fived with our eyes across the room. (An "eye five"!?!)

We went on to discuss our anger issues for a few brief minutes, listing recent events wherein we were all "quick to anger"  - and then just as quickly as the deep moment of introspection came, someone farted and the moment was gone.

We were grateful for that short conversation with Noah. We know he comes by his tendency toward quick anger quite honestly. (ahem.)

Marc Cohn wrote this in his song "The Things We've Handed Down":

You may not always be so grateful
For the way that you were made
Some feature of your father's
That you'd gladly sell or trade
And one day you may look at us
And say that you were cursed
But over time that line has been
Extremely well rehearsed
By our fathers, and their fathers
In some old and distant town
From places no one here remembers
Come the things we've handed down

Troy, on the other hand, seems so very calm.  But inside he is not as calm as he often appears. That is probably also a 'thing that's been handed down'.  Troy has frequently said, "I had no idea I was angry until I got here to Haiti."

After many months and years, Haiti has a way of bringing out whatever ugliness exists in our lives.

If pride is your issue, in this not to be controlled place, called Haiti, you become prideful times ten. If you had a small anger problem before you got here - your anger problem is now amplified under bright light. If you struggled with judgment, dishonesty, fear, control, or any number of normal-human-things, you can try to fool yourself but you'll never fool anyone watching.  It will be on display as you face it in the frying pan or in the fire.

This is a hard place.

It has a way of exposing things.
So much of our struggle working here has been to keep from becoming permanently angry. (Or getting stuck in whatever might be hiding beneath the anger.) The simplest things such as driving, buying groceries, or helping a friend with a medical need at a local hospital will test every ounce of your patience. The real and perceived lack of change, lack of progress, lack of truth, lack of trust, lack of convenience, lack of compliance, lack of integrity, lack of justice ... It all tries and tests.

Things  happen every day that bring your heart rate up and cause you shoulders to meet your earlobes. Much of that anger can feel quite justified and even righteous ... and a lot of it probably is ... but walking around angry doesn't really change anything.

We found out while talking with Noah that we all desire to work harder and to successfully be- "quick to listen, slow to speak, and slow to get angry." As we read from James we had to say to our son: "Buddy, that is us. That is for us too."

Perhaps it's for you as well?

Photo of a quick Maternity Center visit to meet new babies.
This post was edited and republished - Originally posted June 2011
at Thursday, May 22, 2014