For years we have attempted to make contact, via old-fashioned USPS, with the families and couples and individuals that support us by sending their hard-earned $10 to $200 dollars a month. These generous souls allow us to feed/educate our lard-kids, pay the rent, buy the diesel, and do the work in Haiti.

I try really hard to send a note with some of my 'personal touch' - which is basically really crappy handwriting, two times per year. If not me, we at least call upon the crappy handwriting of someone with the last name Livesay.  When we know the donor, we find it easy to check in on their lives and ask a personal question or two about them.  If we don't know the donor we feel frozen and always want to say, "WHO ARE YOU AND WHY DO YOU CARE ABOUT US - OR THIS - ENOUGH TO GIVE?"

It had been several years of writing a thank you note to an unknown donor that went by a name that was attached to their PayPal account that was kind of odd  - it was along the lines of "Rainbows and Unicorns". Most of the time we just addressed it the way we had it listed and maybe added a "Dear Friends, the unicorn and the rainbow" - but honestly, for a few of the thank-you notes, we skipped sending them the note altogether because it is awkward writing a note to a unicorn.

Finally, in March of this year we sat the kids down and we all worked together on writing thank you notes. This time around I decided to research more and figure out the address attached to the mystery people and to ask the mystery donors to pleeeeease make themselves known.  We added a note that said, "You have been donating several years and we are grateful but we are also so curious who you are, please tell us if you're willing."

A few weeks later I got an email from the woman behind the mystery paypal account. She shared a small portion of her story with us. Her paypal account name was for a little business she used to have and she donated from there, which is why their real names had never shown up. I told Troy, "I am really excited about these people, they are so interesting."

I wrote back and asked more questions. Both the husband and the wife began writing us. We learned that they work in an area of counseling and psychology in which we were actually needing some specific help and advice. We asked permission to seek their advice, wondering if that was crossing a boundary. They willingly agreed and offered us tons of help.

The timing was divine and providential. I believed that from the moment the first email introduction arrived in my inbox.

That began several weeks of email exchanges in April and May. They sent us a book on the topic we were discussing in our emails. By June we made plans to meet in Minneapolis during the single weekend in August both Troy and I and the Unicorn and Rainbow would all be in the Twin Cities.

On August 14 we met at a restaurant in Minneapolis for lunch. Troy had a little PTSD because it was the same restaurant he took my Dad in order to ask my Dad if he could propose to me in 1998.  My Dad was not too terribly nice to Troy that night.

Anyway, Troy overcame that traumatic memory of my mean curmudgeonly father and we had a three hour lunch with " B and T " and learned more about this most fascinating couple, now in their seventies.  (We eventually learned they started reading our blog post earthquake and joined as monthly donors around that time.)

They met while protesting during the civil rights movement. Love happened on a picket line in New Haven, CT in 1962.  One was raised Orthodox Jew, the other Jewish.  Their childhoods, hers especially, was not without significant trauma. They married and eventually moved to a quite volatile, Birmingham, AL were they lived for seven years.  They continued to advocate and work for civil rights, for equality for black men and women. They told us several stories from that time, our mouths might have been hanging agape, it was so insanely interesting.

They later came to learn about a Jesus and a Christianity they were not familiar with in their early years. B said this to me about that time: "Our continuing spiritual journey led us to a study of Christianity different than we had known of — we’ve found a way to what we believe/think/hope is the original message of Jesus rather than what seems like the more common, popular understanding that doesn’t seem to imply the love Jesus so clearly espoused."

Together with a nurse friend they founded an organization and worked as Child Birth/Lamaze educators as a side-project in Birmingham while he was a Professor teaching at a University.

He was the first man (gasp!) in the delivery room at the two hospitals their children were born.  One of the two hospitals made him take a psychological screening of sorts to prove he was fit to be in the room. (Because Man - WHO CAN SAY WHAT WILL HAPPEN TO THEM WATCHING BIRTH?)

These people were counter-cultural a decade or so BEFORE everyone else. That is just the CliffsNotes version of their early years.  Since then they have added letters (like PhD) behind their names and they own their own psychotherapy practice and have raised fascinating children and done work that has changed their community and the world.

Someday I actually want to write about their entire life story, maybe when I am not a midwife in the developing world raising a truck load of kids.  If I were ever going to write a book, these are the people I would want to write about. Their life story is inspirational and tragic and beautiful and redemptive.

Within their story we found intersection of a dozen little things.

"Oh us too", we must have said fifteen times.

These are our friends, the Unicorn (T) and Rainbow (B).

They support us.
We support them.

God is in this friendship. 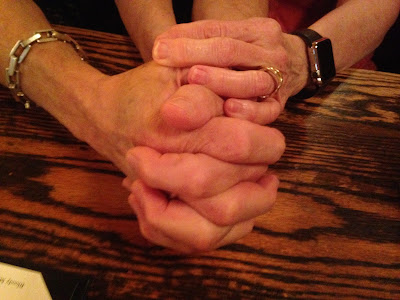