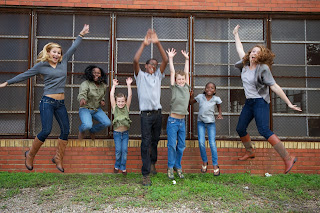 Paige wrote this after a day serving as a translator more than a year ago, she finally broke down (read: under intense pressure) to allow us to post it.

a beautiful soul, written by paige

Sometimes life gets so busy that I forget to see the good in people.

Admitting that is embarrassing, because I sometimes allow things that do not matter at all to hinder my ability to truly see beautiful people.

As I was standing next to her, she looked up and said that she had been there since morning, and needed to get home to her children. This woman seemed to be at least 60, it was clear she had a few years of hard life under her belt. Curious, I asked her about her children. She told me she had seven children. We shared a little moment over the fact that she has seven children, and that I am one of seven kids. I asked her how old they were. She mentioned four older children, and three younger children. Because of my non-stop questions, she went on to explain that the last three were adopted.

The oldest of her three adopted children is named Moses. Again, we shared a moment when we realized we both have a little boy named Moses near to our hearts. She explained that this little boy was abandoned in a toilet, and she went and pulled him out. We again shared a moment over our connection through abandonment. Moses has lived with her as her son since the moment she pulled him out. I asked her if Moses knows that he was abandoned. She said no, that he was too young and didn’t yet need to know the cruelty of this world. I admired her wisdom. Her second adopted child is the son of  her husband's mistress. The biological mother of this boy abandoned this little boy on the street as well. Knowing the connection her husband had to the child, people nearby brought the little boy to her; it seems many know of her beautiful heart. She willingly took him in as her son. The third adoption was that of a little girl who lost her mother in child birth. My new friend, with the beautiful heart, took her in as her daughter as well.

I admired her so much for the stories of adoption and pain and loss turned into service and love. I admired her also for seeing her children as equals. If I wouldn’t have kept the conversation going, and sought out information- I would have never known that three of her children were adopted.

To so many people adoption seems to be a synonym for  “not real children/siblings,” or “charity cases”. None of those things were true for her though. These children were her children. They were just as much her children as her older four. She was so beautiful.

Shortly after my exchange with the brave mother of seven, a woman on a short term mission team started asking me about myself and my family.  This is a confusing conversation for most people. I usually take a deep breath prior to answering. After asking how long I’ve lived in Haiti, how old I am, etc, the next question I often get is, “How many siblings do you have?” I answer, and say that I am one of seven. Each time, I get the same look. The "Wow!” look. It gets old after the first few times, because this is my family you’re “oh wowing” at, people. I get that we are weird, and different than most families, but still, come on, don’t act like I just told you that each of my siblings has extra limbs. Next, they ask how old my siblings are. I say, “23, 11,11,9,6,5” , without fail they ask if the 11 year-old siblings are twins. I answer and explain that no, they were adopted along with the six year old. Then, they get this “oh that makes sense” look and then comes the so you don’t really have seven siblings, because three are adopted comment. At times people have even verbally respond with something like — "oh so you have three real siblings?"  Also, "Do your adopted siblings travel with your family, or stay in Haiti?"

Each of the questions seemed to aim at separating out my family by the adopted kids, and the non adopted kids. To them, there is some important difference to be noted. I don’t know the difference. I have six siblings, and each sibling is the same to me. I love each sibling with all of my heart, and would do just about anything for each of them. They also all each equally annoy me.. so clearly there is no difference between them.

I want to see beauty. I don't like that I don’t open my eyes up and see beautiful people every day. They are all around us. I met a beautiful soul today, and I’m so thankful that I did. She reminded me that it is more than possible to love and care for people that join our families by a less traditional route.  She reminded me of unconditional love. I hope people look at my siblings (all of them!) and see beauty too. I don’t appreciate people separating out my family, because really, nothing can separate us.
at Tuesday, November 26, 2013