Not to speak is to speak. Not to act is to act. Bonhoeffer 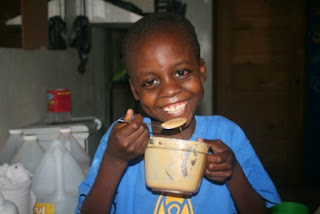 It is with heavy hearts and disappointment that we share today.

We truly hoped to avoid writing this and hoped the situation could be turned around and redeemed somehow.

We are passionate about advocating for the Haitian people we work with and love.

As uncomfortable as it is to share the information that follows, we believe that the Haitian people and the donors that care enough to give to Haiti all deserve better.  We regret that we did not share this information earlier when we suspected it was true; instead we waited until we had indisputable proof.  We have made repeated efforts to address and resolve the issue in question directly with this organization. After being unable to get resolution through direct communication, we have decided donors have a right to this information.

The following is a letter sent on October 16, 2013 to each donor we could locate:

~~~~~
Dear Donor,
We are writing today with important information about a past donation you made.
In 2009 you gave a donation to a Haiti fundraising-effort.   We (Troy and Tara Livesay) were actively raising funds for malnourished kids in Haiti by running the Twin Cities Marathon.  If this doesn’t ring a bell, you can scroll to the bottom of this email for links.

At that time we asked you to give to the “Medika Mamba Marathon” in order for malnourished kids in Haiti to receive a fortified Peanut Butter product that would be produced and purchased in Haiti and given to very ill children to help them recover.  We shared before and after photos of children being treated with the Medika Mamba product at a recue center called Real Hope for Haiti.   We shared that the average treatment cost per child was $100.  For every $100 raised a sick and hungry child could be brought back to health.

At the end of the Twin Cities Marathon $62,200 was raised.  We were humbled and in awe of the generosity of donors. (13 months later another $7,100 was raised for the same cause.)  We were touched by your love for Haiti and by your gifts.
Today we are writing to share some discouraging news with you and to apologize for what we have recently learned.

The organization that we raised the funds with was World Wide Village, Inc.  This is a Minnesota based non-profit organization.  They promised us they would act with integrity and these funds were designated toward a specific cause. We were assured the funds would be used for the purchase of Medika Mamba for Haiti’s malnourished children.  Two weeks ago we learned that only $25,000 of the funds that were raised has been used for their intended purpose and that World Wide Village does not have the missing $44,000. We have written to Randy Mortensen, President of World Wide Village and he has denied any wrongdoing.

We know this is a disappointment and we join you in that.  Misusing funds intended for hungry children in Haiti is deplorable and we are sorry we trusted WWV to handle these funds.
We share this information because we want to apologize for trusting Randy and Pat Mortensen and their organization; at that time we had not seen evidence of mismanagement of funds. In the past few years we have seen multiple cases and incidents that concern us. We resigned from their organization in early 2011. We also wanted you to have this information to inform your future donations to World Wide Village.

LINKS TO OLD POSTS:
http://livesayhaiti.blogspot.com/2009/05/marathoning-for-haiti.html
(the original post about the fundraising effort)

http://livesayhaiti.blogspot.com/2009/10/race-report-sans-photos.html
(after the 2009 race. Donation totals provided by Randy and Pat Mortensen)

http://livesayhaiti.blogspot.com/2012/07/short-documentary.html
(a short documentary about the fundraising and the amazing generosity of donors)

http://livesayhaiti.blogspot.com/2010/10/looking-back-looking-forward-medika.html (the 2010 smaller fundraiser for same cause, $7,100 went directly to World Wide Village during this short fundraising effort)

The company in Haiti that manufactures Medika Mamba is owed more than $8,500 right now that World Wide Village had not paid as of the writing of this post. There has been an outstanding balance for more than one year. That company has graciously provided the product to Real Hope for Haiti at no charge recently due to World Wide Village's failure to pay them.

We are certain that at times World Wide Village has done things in Haiti that were good and that in other cases they have used funds correctly.  No organization is all good or all bad; we are not claiming that nothing good has occurred over the last five years.

It is, however, our personal belief that far too much money has been used carelessly and not as designated.  During our attempts to reconcile and resolve this issue, we have been told that many others have attempted to bring their concerns directly to Randy Mortensen (President of World Wide Village) in the past several years.  We have spoken with multiple staff and board members before we decided to go public with this information.

When we (our family) ceased our involvement with World Wide Village in 2011 it was partly due to our belief that Randy and Pat Mortensen had used our personal family support dollars to cover other ministry expenses. While we don’t think anything illegal happened with our personal support dollars, we do feel that Randy misled us and lacked moral integrity in his decision to use the funds designated for our family without telling us in advance. The funds were ultimately paid back to us over the next several months. We have been concerned about the handling of finances within this organization ever since.

We believe that there are many other alarming situations regarding this organization and their operations in Haiti, including but not limited to: lost assets due to unpaid bills, staff turnover, an inactive board of directors without voting power, a lack of accountability and oversight, Haitian employees being paid late and/or not being paid in full, and debts with companies in the U.S. and Haiti.

It is disappointing for everyone when Christian organizations operate without integrity.  Sadly, something as simple as a broken promise or an unpaid bill can damage the work and efforts of all Christians attempting to love and serve in Haiti.

When we believed that World Wide Village mismanaged our personal funds it was something we easily chose to forgive and let go.  We are not, however, able to ignore and remain silent about this current situation. Tens of thousands of dollars that were raised for the express purpose of helping hungry children in Haiti have not been used for that purpose to date. We find this totally unacceptable and grievous, and believe that it constitutes a misuse of designated funds by this organization. Attempts to seek resolution and formulate a plan with which to rectify these concerns have failed. We apologize to any donor that may feel misled by our former endorsement of this organization.