In September of 2005 my husband and I walked into an unusually stifling hot home near the Port-au-Prince airport. The most giant dogs either of us had ever seen lumbered toward us, huge strings of drool flying off of them, as we stepped through the door.

An oddly dressed man with wild hair and a strange accent offered each of us a wrist bump, rather than a handshake. I caught Troy's eye and said with my raised eyebrow look, "Yikes! Weirdo!"
We advanced into the kitchen where a beautiful woman introduced herself as Beth McHoul, the woman whom I had first written to on a marathon training Yahoo group earlier that year. It was so fun to meet someone I had only exchanged emails with up until that point.
We made small talk for a few moments  before Troy was whisked off for an afternoon with the scary looking guy that we thought was loitering at Beth's house. As it turned out, he was Mr. Beth.
My husband, Troy, spent the next few hours watching the madman at work. I went with Beth to a beautiful and small little children's home where a handful of children in the adoption process were living. Beth explained that for many years they had been processing adoptions. She said that the quality of care was the most important objective and that her ministry was about offering the highest quality care.
That night, we laid in one of the hottest rooms in the history of the universe, inside the McHouls house, whispering back and forth about these interesting McHoul people. Troy told me stories about his day. He said John had been negotiating for a car repair and had quickly said to Troy, "Stand right here, I am going to fall down, catch me." He proceeded to feign a heart attack over the price and actually fall down.  We talked all through the night, mostly because nobody newish to Haiti sleeps in heat like that.
Beth and I woke up to go for a run together before Troy and I headed to the airport. We ran about five miles, chatting about marathons, training, and exchanging running stories and plans for the future. We hoped to move to Haiti and I told her I hoped we could be friends, even if we lived in another area of the country.
That was our first introduction to John and Beth McHoul. We did not anticipate working with them. We did not yet know that Heartline would send those children I had met in their children's home to America all at once after a huge earthquake. We did not anticipate that we would one day be able to work in the area of Maternal Health and women's education and empowerment in Haiti. We did not know that the McHouls would serve as our mentors and teachers. I did not know that Beth would become my running partner for years and years to come.
I wish I had kept track of the miles and hours Beth and I have logged together. I don't know how many it is, but I know it is a lot. We have laughed and cried and had countless memorable things happen along our favorite running routes over the years. There have been times where we stopped running to pray for friends, to pray for Haiti, to pray for our adult children. Running is a spiritual discipline, serving two or more purposes for both of us.
We trained for two races together in 2009 and it felt like that entire summer and fall were spent encouraging one another to keep putting one foot in front of the other. We left Haiti a week before the earthquake to go run a marathon in Florida. The night before the Florida marathon Beth said, "Hey, I know we have not finished tomorrow's race and this is hard to decide right now, but my sister said that she thinks we can have two charity runner numbers for the 2010 Boston Marathon."  I gave Beth a 'WHAT!?!' look.
"Just think about it", she said.
On January 11, 2010 I flew home to Haiti sore and happy that the Florida marathon had gone well.
The next day the earth shook for 45 seconds and life changed drastically for millions. We never spoke of running Boston again. There was no time to train and nowhere to train. For the next few months there wasn't much time to sleep either. The year of 2010 quickly became something entirely different for all of us.
Here we are, four plus years post-earthquake. All of the children that the McHouls were caring for at the time of the earthquake have been with their families in the USA for a long time.

The earthquake meant that Heartline Ministries could transition fully into programs for women that would help keep children with their mothers. The tiny program that had begun in 2008 to offer maternal health care has grown into a full-scale program serving 45 pregnant women at a time and 45 brand new mothers at a time. The Women's education center has grown too. Women are learning to read, write, sew, and make a living for their families in Haiti.

This month  - in just two weeks - Beth is finally getting her chance to run Boston on a charity number.

The Boston Marathon is an institution. The most gifted runners in the world try to qualify for Boston. These are fast, intense, hard-core athletes. If you know a serious distance runner, you might know how important Boston is.
For Beth and I, speed is not a thing. We are not elite runners, we are not fast. I do think, however, that Beth is hard-core. Beth has a fused back from childhood scoliosis and surgery. That means she works even harder than most runners. I know she works harder than I do. While her race is not about speed, it is about perseverance.
Today, just two weeks until Boston Marathon race day, I am asking you to support Beth. I am asking you to pray for her, for the work she does in Haiti, for the training she has left to do, for her race day legs and endurance, for her ongoing race in Haiti.  I am asking you to give.  Offering Labor and Delivery services and Prenatal care and education in Haiti costs in more than just emotional dollars. We need your support, we need NEW people to hear about the work here. Please help us. Please support Beth.  (On the right side of this blog, at the top you will see a Pure Charity widget that offers you a chance to give to Beth's Boston Marathon for Haitian Women.)
Her race is about endurance and about pushing through.  Her 25 year long race working in Haiti and her 26 mile long race at the Boston Marathon will look very similar.  Things get really hard. It becomes tiring. At times it feels like there is no finish line, no victory.  The path is unknown and the hills so steep they feel impossible to climb. Beth pushes through the mental and physical roadblocks. She faces adversity in her work and in her running in a way that teaches all of us that stand on the sidelines cheering for her. 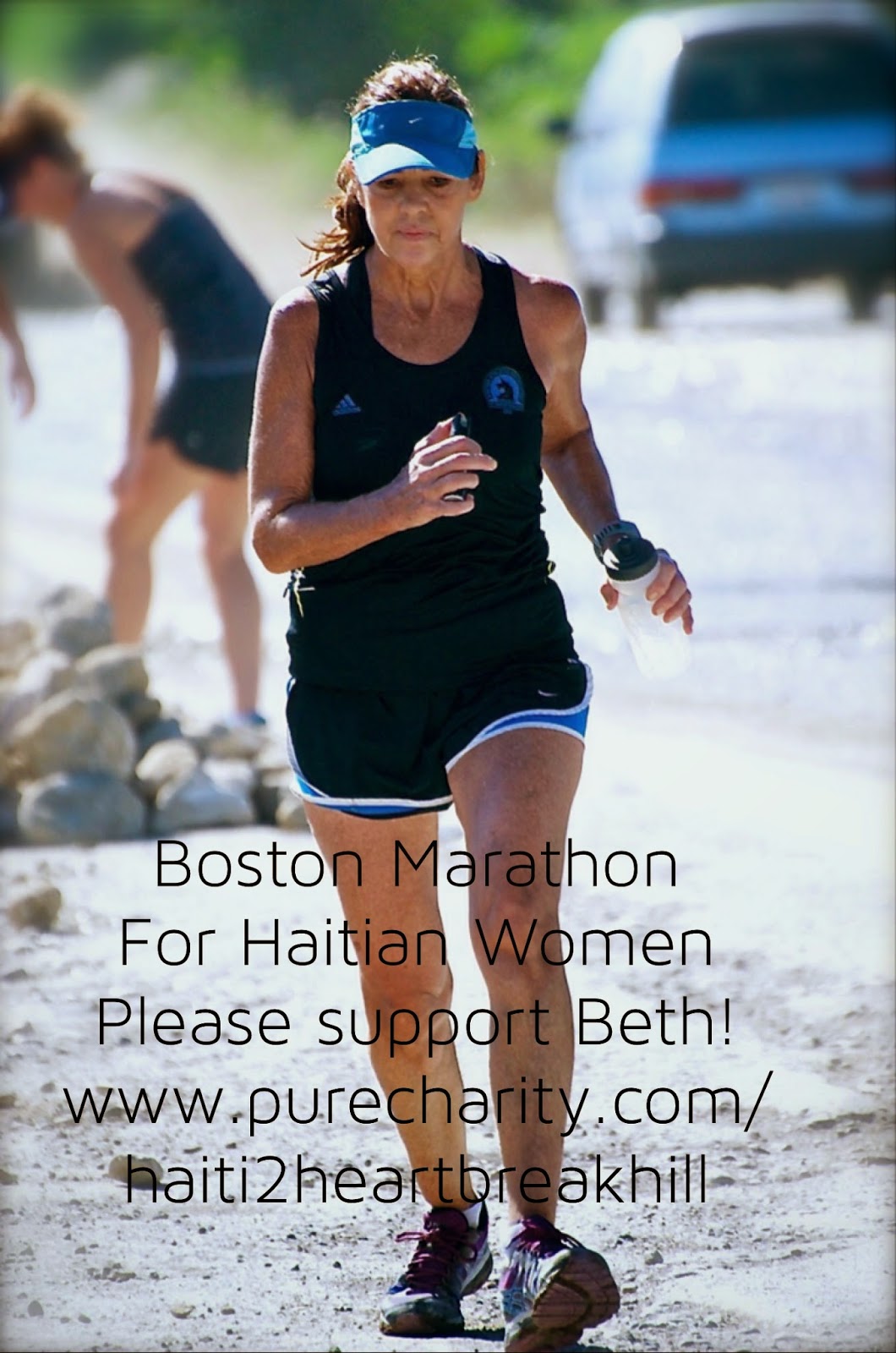 By Beth McHoul
I grew up in Boston. We call it Bahhhst-inn, which is the official pronunciation, by the way. Life called us away from Boston to a resource-poor island in the Caribbean many years ago. Although I haven’t lived there in 25 years, my husband and I still carry our accents and our Bostonian pride with us. We don’t pronounce our ‘R’s and Boston is still home.
The Boston Marathon bombings rendered me senseless last year. I anxiously waited until the news came that my running sister, who had been a mile from the finish, was safe.  My team of co-workers and midwives here in Haiti, a world away from Boston, worried with me. We prayed and stalked Internet news, sitting on the edge of our chairs as each new piece of information was released.  I am no stranger to upheaval; my own world here in Haiti is often volatile and full of chaos.
This was unnerving, my other world in turmoil. Boston, home, where I go to visit family. It is safe, rock solid, and a place of comfort – until last year when terror touched her too.
The Boston Marathon has always been a huge event in my life.  “Marathon Monday” is a holiday like none other, although we take St Patrick’s Day pretty seriously, too.
My sister, Charleen, has run Boston over a dozen times and she knows every landmark, every hill (big and small) and every water stop.  Calvary Chapel, our running club, mans the water stop at Heartbreak Hill.  Heartbreak – the defining point in the marathon, the hills that conquer your soul.  The hills that tell you, you are almost done!  Six more miles to go and you have made personal history.
Calvary Chapel’s running club offered me the rare and incredible gift of an invitational number to run Boston this year.  This most important year.  The comeback year.  The year that wins over terror.  The crowds will be back, the fans will cheer, the runners will run and evil will not win the day.
I will be among the runners.  I’ll be in that crowd. I’ll make my statement. I’ll run to say that other people matter and evil cannot overcome good.  I get to be a part of that every day in Haiti, where women who would typically get no prenatal care come to our Maternity Center for care and a safe birth.  I’m part of a team that supports women through pregnancy, birth, and child development.  Moms and babies live. Every safe birth crushes the unfairness of poverty just a tiny bit.
I will run Boston this year.  I’ll train here on the chaotic streets of Port-au-Prince. This older American woman will be part of the hectic morning scenery these next few months. I’ll bob along with my water bottle and navigate the busy streets as if I were trail running.  I’ll encounter pigs and goats, school kids and merchants, overloaded trucks, UN tanks, rocks and obstacles of every variety. This is my norm.  I live here.  I love this place.  It is home, too.
This particular 26.2 mile run is personal. This is my grand finale as an aging marathoner training in the midst of a third world city.  Also, my run is public. I am asking supporters everywhere to pledge money towards Heartline Ministries in Haiti to fight poverty and injustice.
Heartline provides literacy training, sewing school, cooking school, prenatal care, safe birth, post partum care, and a men’s bakery.   These programs equip folks to care for themselves.
I’m running to show support to my hometown and I’m running to show support to my adopted country.
Every runner tells bombs they can’t win.  Every fan, every cheer, every person on the sidelines are telling terror it is not welcome here.  Every foot strike pounding the roads from Hopkington to Boston shouts evil does not win.  It can’t win in Boston and it can’t win here in Haiti. We stand against terror with Boston.  We stand against poverty for Haiti.  Stand with us!
at Saturday, April 05, 2014