I find myself in an unusual position.

Or  ... Maybe this happens to you all the time.

One morning last week I stood in the kitchen pouring caffeinated goodness, the steaming hot breath of life, into my favorite coffee-mug when Geronne walked up to me and said she had a message from the neighbors.

I jumped immediately into worry knowing that it has taken some time to be decent friends with our neighbors. Loud kids and loud generators make for rough relationships. We have worked so much out over the years, I sure hoped nothing had happened to put us back on their bad side.

Geronne went on to explain that the wife of the couple really thinks our Shih Tzu, Chestnut, is a lovely dog. Geronne has lived with us a long time. She actually used all Kreyol to tell me this, save one word. She used the English word cute. "Yo renmen ti shin ou, yo panse li cute." (They love your little dog, they think he's cute.)

Okay, I said, and so what if they think he is cute?

Geronne went on to explain that they want to know if Chestnut will "fè bagay" with their little female dog. I know what fè  bagay means, but I must have looked at her funny because Geronne clarified and said, "ou konnen, fè sèks". (you know, have sex)

I laughed it off and said that we have already asked Kelly, the famous Haiti Vet, to roast the nuts of Chestnut and make him into a celibate man. Geronne said, "Yes, I told them that but they want him to come over before Kelly does that."

The week got busy, friends came to visit, some babies were born at Heartline, I did not think about those propositioning neighbors or their ovulating little Chihuahua again.

Friday night there was a knock at the gate. Knocks at the gate after midday are pretty uncommon. Lydia opened the gate and the neighbors (both husband and wife) moseyed on into the yard.  Troy and I went out and did all the kissing back and forth, give yourself vertigo, greetings.

We regained our balance and made small talk for a tiny second before the wife asked if Geronne had told me how much they love Chestnut and how their dog is looking for a lover.

I said, yes, yes , she told me.  From there an utterly bizarre conversation, half Kreyol half English and interchanging the two, took place. Things were said that I don't think are normal or even okay.

We stood chatting about how handsome Chestnut is and their little dog's period and then wondering aloud together when they are supposed to hook up? I said during "règ li" (her period) and the neighbor thought afterward. The wife even explained the way she thought the girl dog looks down in her nether regions, when the boy dog is wise to head over wearing his best cologne and cowboy boots for added height.

After lots of speculating between people that have never ever bred dogs we decided that some Google-ing and research (and a lot of stalling on my part) was in order as was a talk with Chestnut about how he feels about being used for his seeds like that. I happen to know that Chestnut is a deep feeler and he is going to want more than just some cheap hook-up.

Our sons were adamant that if they are going to let Chestnut go do the nasty with some random and unspecial (to them) Chihuahua, they want one of the puppies.  I told them we don't really want another little dog. The boys said, forget it then, Chestnut is not available to be used and thrown away like that if there was nothing for them to gain from it.

The problem remains that the neighbors still want our dog to come over for a little dinner and hanky panky and we don't really know if we want our little guy doing that stuff.  Their dog doesn't seem good enough for him, number one.  Number two, what if it consumes his mind from then forward and we never get our innocent little Chessy back again? This could lead to a snowball effect of a whole lot of problems that we are simply not savvy enough to deal with well.

I may hide from them for a few days, or claim Chestnut fell very ill, or have Kelly the Vet come declare him infertile, or just make him infertile.

I want to end this story by saying these funny neighbors are strange and pushy about getting our male Shih Tzu with their girl-dog  ... But the other day Noah took issue with calling people strange. 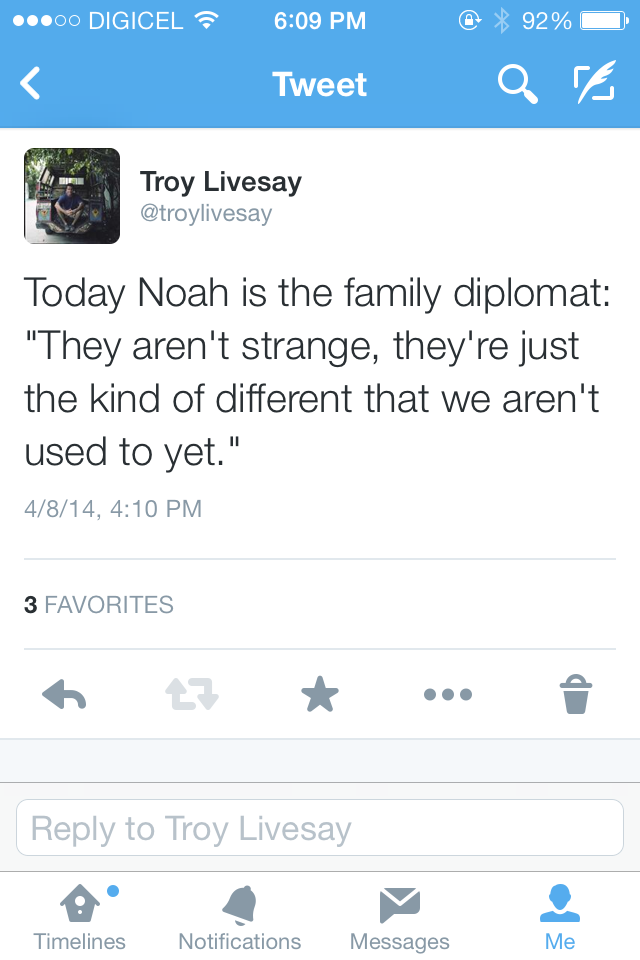 I guess it can be said that this whole thing, with hooking dogs up cross culturally, is a kind of different that we just aren't used to yet.