Open International Adoption, Is that a thing? Part III

Please find Part I  and Part II of this series and the additional post 'On opening ourselves up to pain and possibility', if you have not already read them.

Part III has been the hardest to write because it is difficult to determine which things should be kept private and which things are important to share.  Our two older Haitian children are open to sharing a bit about their experiences but their families do not have the access and privilege we have and that makes it feel a tiny bit scary to share with total strangers and trust that our hearts will be heard and understood. The relationships are difficult to describe and we want you to know that what we share is only a portion of the total. Some of the detailed information and history of what we have learned as our relationship has grown with the first families would best be shared face to face.

These birth-families are 'our people' and we never want to share anything that would feel uncomfortable or embarrassing to them because we deeply respect them and we have learned they do not want or need our pity, they simply want and DESERVE our respect and honor. These are kind, loving, hard-working, capable people that just happen to be materially poor and live in a country where changing that is very, very difficult.

There is one caveat required on these 'open' international adoption posts that is too important to neglect. Before anyone can consider an open adoption, they first have a responsibility to be sure that the adoption they are doing is ethical and legitimate. I wish I had known more and done better.

Our two first-mothers don't express any regret whatsoever about their decisions, but they were manipulated at the time of relinquishment (promised things we were not privy to at the time) and we regret that happened to them.

I understand that lots and lots of North Americans believe that their wealth automatically and unequivocally makes them better suited to raise the poor people's children. I do not agree and there is a large problem with that thinking. For those that don't automatically think that all poor children should be taken from their parents, I urge you to do way more research about your agency and country than seems necessary. I beg you to walk away if you see or sense something is not quite right. The only way to stop the corrupt system from preying on vulnerable people is to refuse to be a part of that system.
{For more thoughts on the corruption in International Adoption, take some time to read this post and the follow up after it.}

I asked Isaac to talk and let me type what he said. This is his stream of consciousness regarding his most recent visit to their home last month.

Isaac said:
"One important thing was that I learned was the story of when I was born and the story of that was pretty awesome and I learned that my grandmother delivered me at the house my family lived at in... (he paused and couldn't remember where) I have the date of my REAL birthday date and now we can celebrate the right day because we had the wrong day and now I get to have a birthday sooner this year. I learned that I have three siblings that have stayed with our Mom and Dad. I felt happy knowing that they are okay and knowing their house is great and they are okay and that one of them had a notebook full of English. It was important for me to know why they decided to place me. I think I look like my dad and my mom and my 14 year old brother a lot. I'd like to see them again and I know they are sad about not seeing other parts of their family that were adopted and I'd like to keep in contact." (I asked Isaac at this point if there was anything he is worried about?) He said: Well, it would be cool for them to be able to go to the States and have some fun and I'd like them to see what I have seen but I know that is probably not very possible.  It is okay that they placed me but I wonder sometimes what it would be like to be with them but that doesn't mean that is what I want, it is just what I wonder. I am glad I have Noah and this family and that is good  - the best actually - but I still wonder of course. It is weird to think that I might be scared of dogs if I had stayed with my first family. I think that they are good people and I love them and I don't speak their language fluently so sometimes that part is hard."

These photos are from our March visit.  We went all together with Isaac's little sister that has also be adopted and lives in the USA. It was the first time the family had all their kids together in one place. Their grandma showed up and is the feisty power behind the scenes. Grandma had TONS to say and shared her frustration with not knowing about some of her grand kids that have been placed in families in the USA. (Isaac has aunts that have placed children too.) She somehow found out that one family that adopted her grand kids went through a divorce and she had some things to say about that. She prayed with lots of energy over the group before we said goodbye. 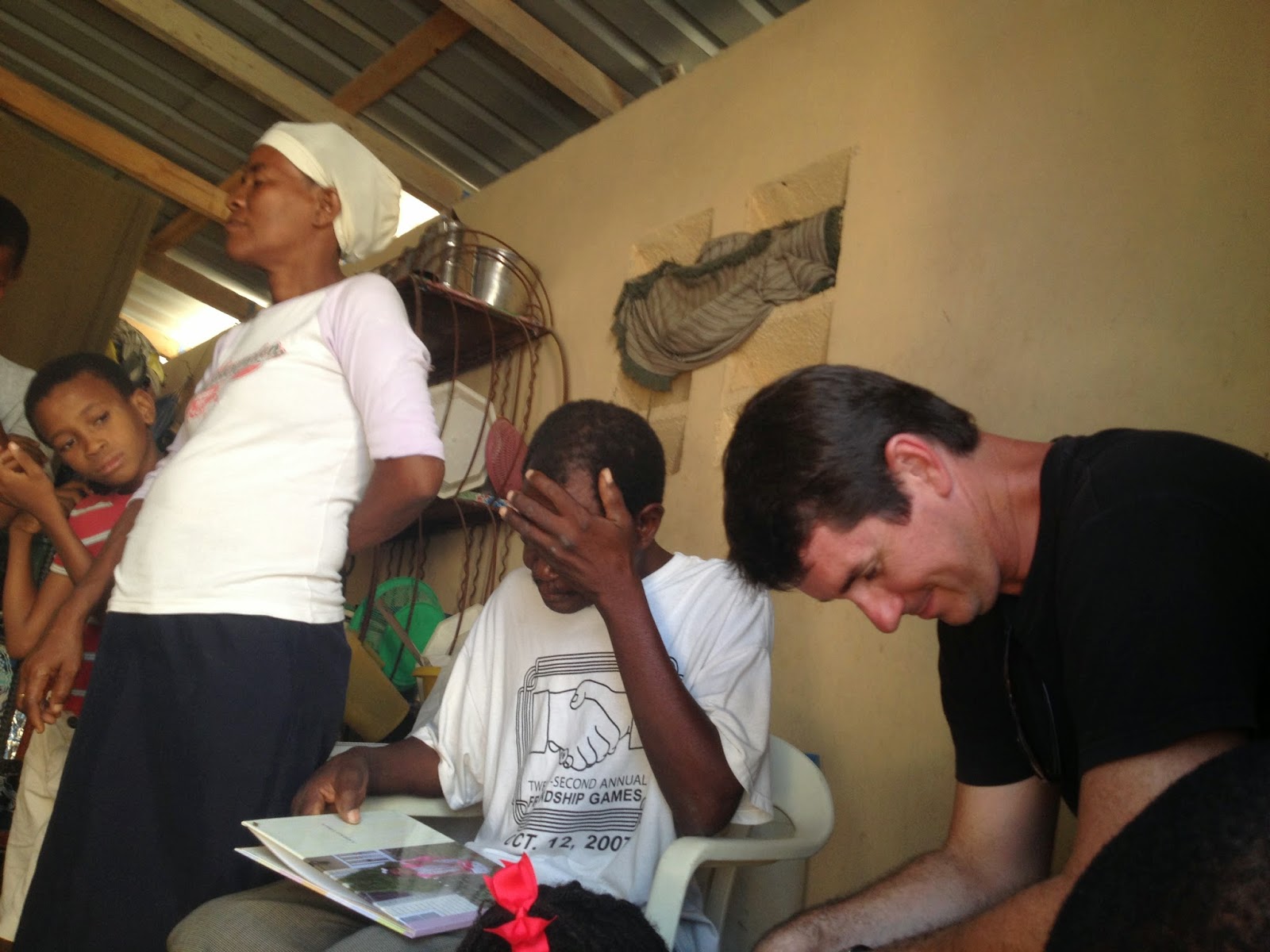 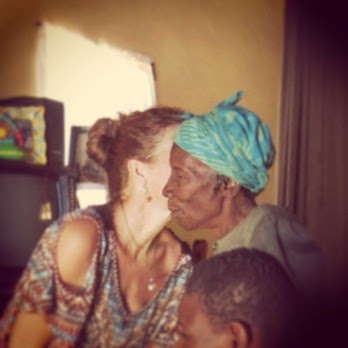 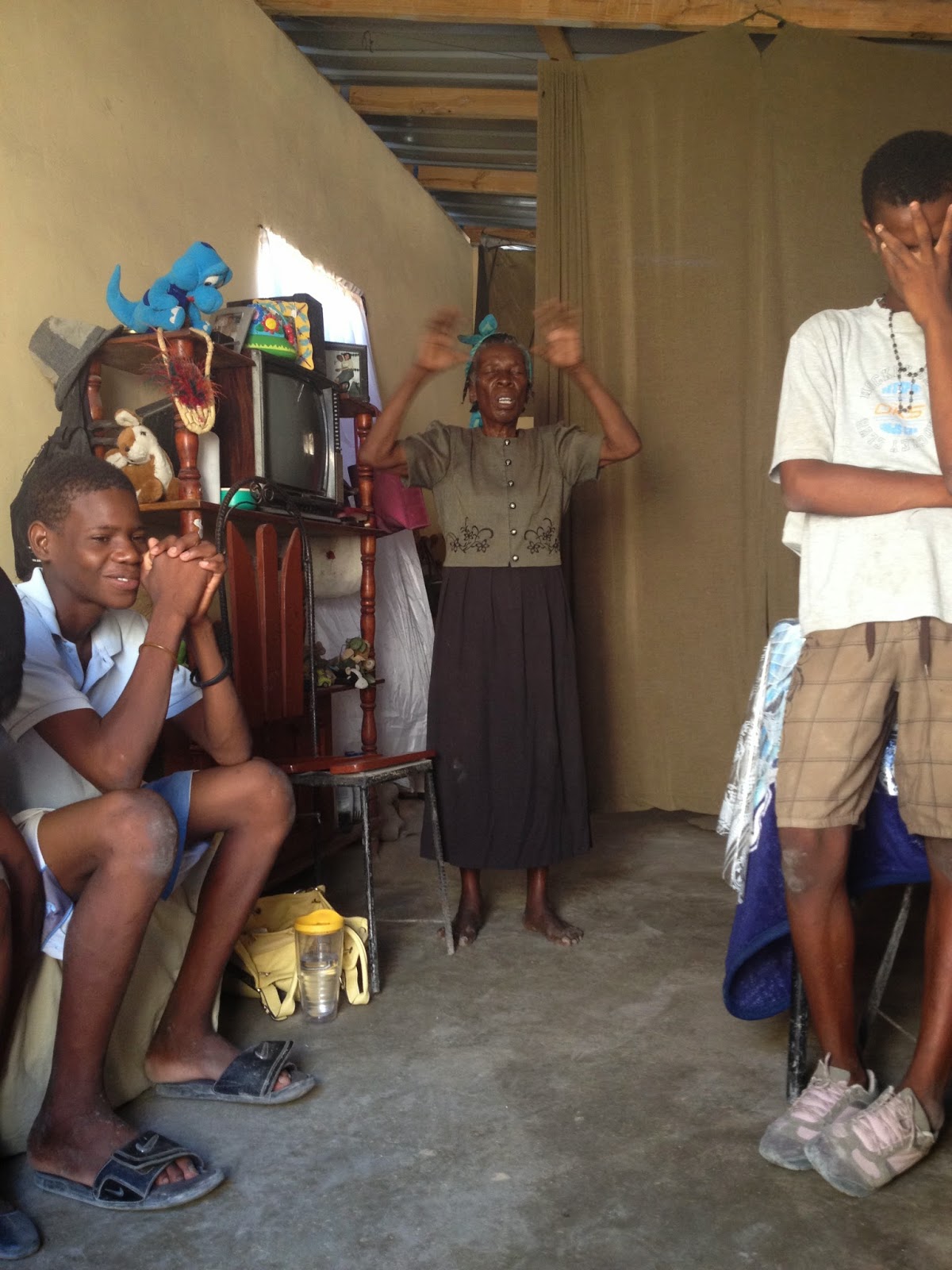 If you know our Hope, you know she has less to say than Isaac.  It is not because she has less thoughts or is not a truly deep thinker, it is because she is of the opinion that not everything she thinks needs to be said. :)  (ahem!)

Hope met her birth mother at age 4 too. She was adopted at 9 months of age and was very ill as an infant. Her kidney surgery at 10 months of age was necessary in-part because she was passing kidney stones. Hope's birth mother wondered if she might die before her adoption was complete but she expressed gratitude to God that it was completed quickly and surgery was possible.  (Back when Hope and Isaac were adopted the process was 6 to 12 months long once you delivered your dossier to Haiti. That has changed over the years into a much longer process.)

Hope's first-mom has seen her at least once a year since she was four years old. Hope and Phoebe are the last two children born to their Mom. (Phoebe is only seven years old and has not been visiting quite as much. She has seen their Mom but always has the choice about visiting. The last time we went she chose to stay back.)  From their biological mother, Phoebe and Hope have three much older siblings that live in Haiti. We have become fairly close with Hope and Phoebe's older sisters, they have both been in the Prenatal Program at Heartline. One delivered with us and one lost her baby after delivering prematurely last summer. They also have three more siblings that live in the USA with two different adoptive families. They have a little contact with the USA siblings and have met one of the three.

Hope recently visited her Mom's home AND met her birth father for the very first time.  Hope had never been interested in meeting him until this year.  In January she asked if we could find him and we called her birth-mom who promptly made some calls and arranged a day for them to meet. While they are not together, they are friendly and don't mind staying in touch.  (Both Hope and Isaac did not have fathers listed on their adoption paperwork, the orphanage instructed the mothers to claim either not to know who the dad was or to say that the dads had died.)

Hope said:
"The best part of this is seeing how my face is made, how I can see why I look the way I look." "The worst part is that I don't speak Kreyol well and I cannot understand much of what they say or talk to them by myself. I hope that my Kreyol will improve and one day I will be able to talk to them without my Mom and Dad translating for me."  Hope added that she found it slightly confusing that her (birth) Mom and Dad seem to be friends and like each other and in Hope's mind it is odd that they didn't stay together if they like one another.

We have brutally honest conversations about adoption and we want our kids to have the freedom and ability to bring it up whenever they want. We have made a decision to "do it afraid" when it comes to these relationships.  I don't say that in any self-congratulatory way, I simply share it because you don't need to wait until you are not afraid to enter into these sorts of things.  It is scary but usually the courage you use to do it anyway ends up being its own gift and much can be learned from risking in relationships. We have moved forward carefully in each decision with a desire to do what is best for our kids.  As they have gotten older, these relationships have grown. Our hope and prayer is that it helps our children and their first families have more joy,  more healing, and more peace.