proof of life post with my mantras for the coming year 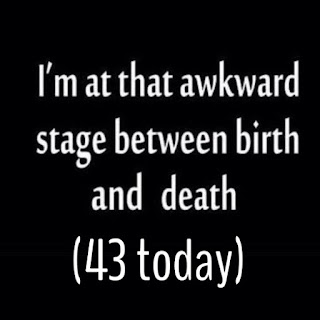 I know lots of women really struggle with aging ... I have had my little moments of self-loathing and panic as well - for sure I have ... But let me just say, it isn't that big of a deal.

Having a birthday and getting old means ALIVE and alive is good, I think. Plus, this Grandma thing makes you feel REalive.  If you get to do it someday, I know you will love it.

-So what if you start to say something and forget what you were saying mid-thought.

-So what if you don't know what the hipsters are up to anymore and their beards and fashions and hashtags confuse you.

-So what if your ankles won't bend right in the morning.

-So what if you call your kids the wrong names.

-So what if the wrinkles around your eyes show even when you're not smiling.

-So what if your drivers license weight is now a 10 pound lie instead of a five pound lie.

-So what if you fall asleep while showering.

In this decade of being 40-something I have felt the weight of 'proving' anything being lifted from my shoulders. It is so FREEING. I want it for all my sisters, young and old alike.

Two things have spoken volumes to my heart and soul in the last several weeks.  When I read them I had that "YES! THIS!" response.

Here they are, my personal mission statements / mantras for year 43...

The first was this, John Pavlovitz - said:

More and more, I simply live to be the antidote to the things I find hurtful or damaging in the world, rather than arguing with those I believe are being hurtful or damaging. There are certainly times to identify dangers and to call out injustice, but those pale in comparison to the countless moments that simply require personal goodness.

Friends, there will always be those whose medium is vitriol, whose currency is condemnation, whose agenda is provocation, but resist responding in kind because that only conforms you to their image.
If you claim Christ, until you have a Christianity without venom you don’t have one that resembles Jesus quite yet. As a person of faith, this is the only kind of religion I am interested in.
Maybe you are like me. Maybe you’re bloodied and weary of the fight, but finding your second wind and discovering a better path, one less mired in sarcasm and less toxic to touch.
Maybe you’re intentionally walking away from the war trenches, so that you can move toward the hurting, the unloved, the waiting—and respond.
If so, welcome.
This is the beginning of a holy movement in the world.
The other was this: 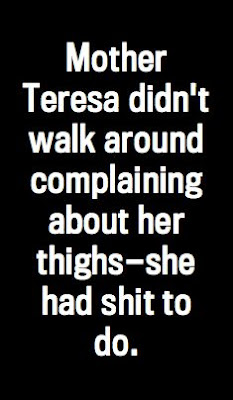 Those two things are my older-lady truths.

We have shit to do and people to love.