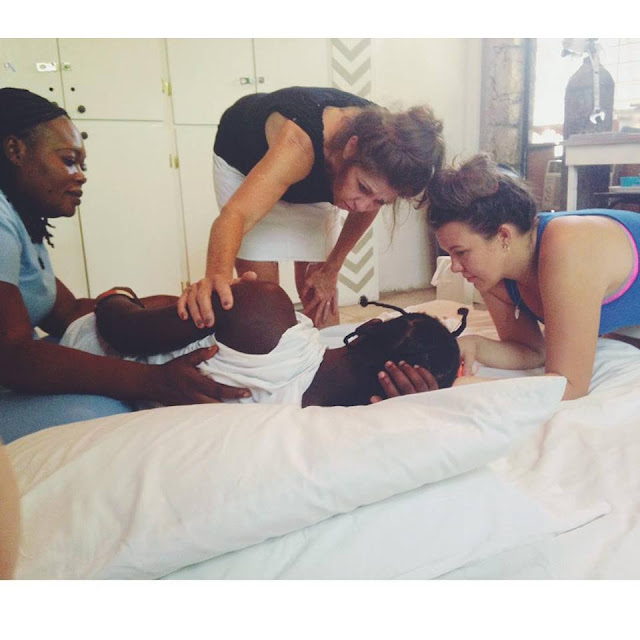 When I plop myself down in front of a perfectly positioned fan in order to write, it is because something desperately needs to be released from me through my fingertips. Once released in this medium, I typically find some sort of mental rest.

I don't really know yet how I feel about everything that went down in our unjust world yesterday. My desire for justice is strong and often causes me to be annoying and angry and angsty.

I don't necessarily have it all worked out in my head or heart. I typically wait several days to figure out how to see the positive or feel there is something redemptive to say or share. I like to at least be able to have some way to categorize or process a certain event without sounding hopeless. I am not sure I am there yet, but I am beginning anyway.

Yesterday was rough for Asline and several others.
At one point we sat watching what was happening and said, "This is war."

Asline is a first time mother, she first arrived in November 2014 ... 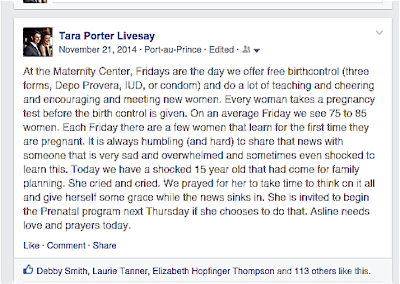 We meet so many people each month, I don't usually remember details super well. In this case, I do remember the day I met Asline. On November 21 ...

After being given an open invitation to join the Prenatal Program, and specifically being asked to return on Thursday- the day of American Thanksgiving, Asline left the Maternity Center carrying with her a cumbersome load; the heavy knowledge that she was pregnant.

After seeing the Facebook post, a friend of mine wrote me and asked how she could help.  I said, "We really just have to hope and pray she shows up. That is all we do."

My friend replied, "Ok so I'll Pray she JUST SHOWS UP. Just showing up and nothing else is my specialty!!!"

On that Friday Asline explained that her sister had forced her, against her will, to take medicine in hopes of ending the baby's life. She came in upset and unsure if she was still carrying a living baby. That day we put a doppler on her and this is the photo that was taken when she heard her little guy's heartbeat for the first time.   Happily surprised he was alive, she made a decision to carry her little one. 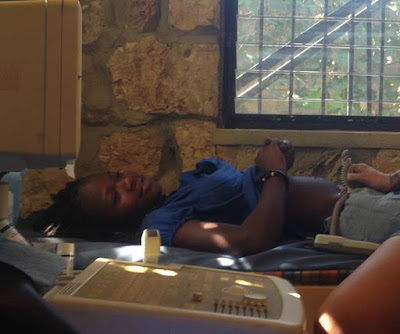 She moved in with her aunt and began coming each Thursday to the Prenatal Program.

{Short sidestory - Our first interaction with her aunt was in early 2014 when we had the misfortune of being introduced to her after she played a key role in burning Asline's older sister.  The aunt had forced upon Asline's sister the cultural practice of sitting over the steam of "dlo cho" (hot water) after giving birth. In this case, that practice ended up causing severe burns.}

On her third miss, the day she technically (by the rules and regulations book that we all abhor but understand the need for) was supposed to have been kicked out, Beth McHoul was the one that voiced her hopes that we could try and make a deal with her to come Friday and make the missed class and consultation up the next day and thereby get around the three miss rule that way.  "If anyone needs this care, it is Asline", Beth reasoned.

As a staff we talk a lot about whether or not we are making any kind of deeper connection with the women.  There are times when a woman may connect with one of us more than the others, if we notice that - we are sure to honor that relationship and trust by assigning the trusted person with the most responsibility during labor and delivery.

If there were a way to track that statistic without it being totally biased, we would like to be able to say something along the lines of, "77% of women feel trusting of themselves and of us when they walk in on delivery day."

I don't know.  It feels like the majority do, but I have exactly zero made up stats for you.

I share all of that to say, we thought we had built at least a bit of a decent rapport with Asline and while we assumed her labor and delivery could be quite difficult, we simply did not anticipate her deep hurts and fears, the ways in which they have changed her, or what happened next.

“Midwifery is the very stuff of drama. Every child is conceived either in love or lust, born in pain, followed by joy or sometimes remorse. A midwife is in the thick of it, she sees it all.”

― Jennifer Worth, The Midwife: A Memoir of Birth, Joy, and Hard Times