It was nearly a fortnight and a score ago, but I still recall it well.

Troy said to our two young daughters, "Well, girls, Mom will be traveling a lot for work and that is going to be new for us.  Change is really difficult. I don't like it."

Paige, about 5 years old at the time, responded with, "Yeah, I hate change...I like dollars."

The more things change the more they stay the same change.

We just traveled and traveling always reminds us that we do not understand our world or the changes.

Our very quick trip to the US of A was a tiny bit disconcerting. While we were connecting flights at JFK we went into a place where there were hundreds of ipads everywhere.  Zero humans greeted us so we wandered in to stand awkwardly looking for a person to interact with - eventually we chose our table and tried to see each other over the iPads.

WHAT tha, we wondered? 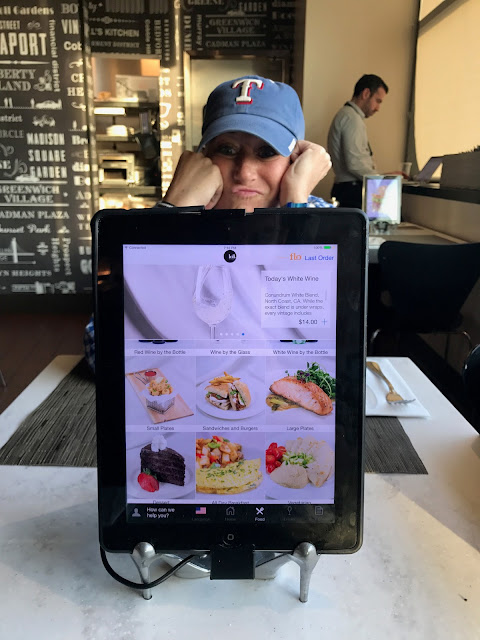 After our bewilderment at seating ourselves and ordering our food from an iPad, we were shocked when a robot approached the table to place the food in front of us. 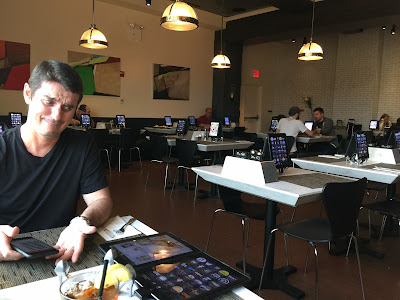 Just kidding. It was a guy. He just had the personality of a robot.

The interview with Stefanie, the way overqualified teacher, went very well.  We both kept Eye-fiving during the lunch because we both knew if she wants the job, she is the one we need.

After lunch she gave us a little walking tour of her town.  As we were walking around I suddenly had the worst headache.  I grabbed Troy and said, "We gotta go."  We said goodbye to Stefanie and hailed a ride back to the apartment.

Once there, the fullness of illness set in. I curled up on the bed and hated myself.  I then broke out in alternating hot and cold spells followed by tingly hands and lips, followed by much toilet usage of all varieties.

I last had a similar illness in September when I went on a date night with Troy and came home violently ill.  That time, I assumed I had food poisoning from bad shrimp.  At the lunch with Stefanie, I ordered shrimp again for the first time since September.

Can a person be so unlucky as to get food poisoning twice in a row from shrimp in two countries eight months apart?

I was thinking yes, I can easily be that unlucky.

My friend KJ who is a very smart young person said: "That sounds like a shellfish allergy."  A quick search of the Google confirms that adults get new allergies to shellfish after having no allergy in the past.  Seems true to me. I will never ever test this theory because it would require so much vomiting to prove it.  I am done with this experiment ka menm (no matter what).

Stefanie is thinking over the job offer and the massive pay cut she has to take in order to say yes, and we await her final answer.  We are so totally chill about it. Not worried. No stress.At.All.

That's a lie and I desperately hope she takes it because she is exactly what we all need going into the high school years with the big kids.

At the conclusion of ShrimpaloozaVomiFest it was Sunday and we had 24 hours to walk around and be married people that communicate well and do the talking and the listening and then also try for some va-va-voom moments too.

Haiti stress, sadness, sweat, and bugs really do cut back on the va-va-voom of life.

We took those 24 hours seriously.  The only non marriage enrichment thing we did was write thank-you notes but we were doing them together at the same table so it probably counts too.

For dinner we walked to a place that was recommended to us and immediately wanted to put the brakes on and rewind our way out of the booth we were conspicuously seated in with three servers staring at us.  I so wish I just would've said to the tiny-little-hipster-bearded waiter with the 28"waist - "You know what?  I apologize for sitting in your booth with my normalish size butt. The thing is, I need to leave. I cannot pay these prices for these things that don't sound like food."

Instead we glanced at the prices and said, "We are just here for an appetizer."

Because asparagus is not a veggie we can easily have in Haiti and we both love it, we went with that.

When it arrived it was hard to see any asparagus and it led us to move things around and count the actual asparagus stalks on the $14 plate.  We are not millennials so maybe we don't see well or comprehend well or something but we know for sure it was not a lot of asparagus, because the normal weird urine smell after eating asparagus did not even happen. That has to be part of the test to determine if you've had a sufficient amount of asparagus.  Yes?

On top of the 8 pieces of asparagus, we were served an farm-fresh-egg filled with liquid gold, or at least priced as if it were.  It tasted just like the old non-farm eggs we normally eat. 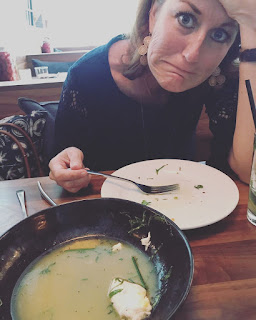 After sufficient mockery and scoffing, we paid our waiter and left the faux restaurant to head to a place that serves food for 150 pound + people.  It was delicious and $29 total.  I may have wept with joy and gratitude for the sufficient calories at a fair price.

Once we were properly nourished, we walked back to our place.

At some point during the date yesterday, Troy made a profoundly troubling statement, probably meant as a sexy compliment ...

That would be so wonderfully special to hear, if I was not currently sitting and waiting to get onto an airplane to return to Haiti, where I apparently no longer have skin that will feel amazing.

So, as we fly off to the land of no asparagus or amazing skin, we pray for Stefanie and the big decisions she has to make and we look forward to hearing from Isaac about his week at Veterinary Medicine Boot Camp. He got home after we left for the interview.

Our friend KJ told us she made a chicken while she was with the kids and when Lydie saw it she said,
"What?! That's really what a chicken looks like? Its legs sticking out and everything. I thought that was only real in Amelia Bedlia books!" (Obviously our whole family is far from realizing or even recognizing farm to table utopia)

Stefanie has a lot to teach these kids.