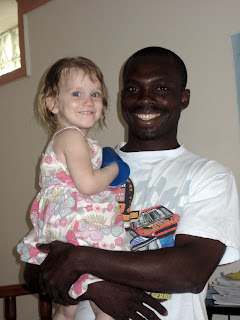 We never stop learning how the culture works ... sometimes the lessons are amusing, other times they are annoying ... and lots of times they are just sad - but either way, we keep learning. :)

About four months ago Tipap moved over to the Guest House to sort of keep an eye on things there. We did not have enough work for him at our house, and we needed eyes and ears over there.

We have a much more steady supply of sugar at our house since his departure ... man did he enjoy a sugary juice now and again and again and again. ;) But, he is still a bit of a hero at our house and the boys and little girls are happy to see him when he stops over. He is in his second and final year of mechanics school, and takes care of the yard and does odd jobs at the WWV house.

There is a cook that comes in when teams are in. The other position at the guest house is a cleaning position. We have not had such great luck in filling the position.

At first we hired Tipap's sister. There were some really good cultural reasons to hire his relative. We truly thought it out beforehand, convinced it was an excellent plan. She lasted about 7 or 8 weeks. As it turned out she was mad anytime she had to work. Troy finally told her (in the form of a list) what needed to happen daily, weekly, and monthly. She got very mad. She thought if she had to work - then the pay, shelter, and food allowance she was receiving was not enough. All of that was apparently her reward for breathing.

Even when you're annoyed, firing someone stinks. Troy hates it. It has not gotten easier. As it turned out she was HAPPY to be fired. She practically skipped out of Port au Prince. Tipap seems happier without her too. We were wrong on that hire.

The next person we interviewed was mad when she showed up. She had some anger toward someone and something that had nothing to do with us. Troy got up and walked out of the interview and told her it was obvious they were wasting time.

The next person we hired was AMAZING at cleaning. She was nice, smiley and friendly and knew how to clean very well. But she stole Vivien's clothes, guests toiletries, and food. So, today Troy fired her. She did not ask why or get mad. Obviously, she knows why.

The weird cultural lesson came when I asked Tipap on Saturday if he liked the new cleaning person and if he thought she was doing a good job. (I only asked to practice Kreyol.) He hesitated and then looked down and shook his head no. I pushed him on it. Finally, with my cajoling, he shared that she has been stealing. He told me she had taken some things from his kitchen (an outdoor Haitian style kitchen) and that he had seen her take other things. He had no plans of telling me but I bugged him until he did. When Troy talked to him he told Troy that he wanted to wait and watch her and see if she took other things ... sort of give her a chance to get worse or better while he decided what to do. He and the cook had talked it through and had a plan for observation and control of theft.

This is a very typical response. Tipap hated to see her lose her job and wanted to protect her. It is very normal for us (as the outsiders) to be the last to know. Tipap was ticked off at her and did not like her but he did not want to be responsible for ratting her out and therefore "causing" her to lose her job. Even though in our minds it is HER fault for choosing to steal -- in Tipap's mind it is his fault for telling.

We have teams for 20 days straight starting this week. We have no cleaning person. TIH!
at Monday, November 30, 2009