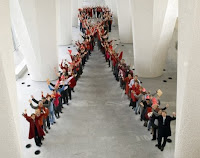 I admit that the global problem is too big for me to wrap my mind around, I admit that statistics simply overwhelm me. I confess that fighting AIDS seems daunting and difficult - and things that big make me want to look the other way. I admit that at one point it was something I brushed aside - even thinking, 'that is their problem'.

In the last 18 months we've been working more and more with people affected by the disease. We've seen some harsh realities of the disease. It has a human face. That cured me of thinking it is their problem alone.

Now, when I think HIV/AIDS - I see the faces of seven women we have come to love, respect, and understand. Their stories are heartbreaking. They did not ask for the disease and they do NOT control the circumstances that caused them to contract the disease. There are underlying social and structural issues that increase their vulnerability - most of which I cannot possibly understand coming from my American paradigm.

They are people with hopes and dreams and hurts just like you and I. The statistics don't tell the human stories. Every.single.one. of these millions is known by name by the GOD of the Universe ... and if He cares - I darn well better care too.
Praying for them and caring about them on World Aids Day and the days to follow.