Congrats to the Happy Homeowners!

Britt and Christopher and their dogs Yogi and Zoe are officially homeowners in Texas. We are really hoping one or two of us can go see their pad sometime in the first part of next year. If not then, we'll be there next December to see them graduate. Already excited about that, but hopeful that we might not have to wait so long. 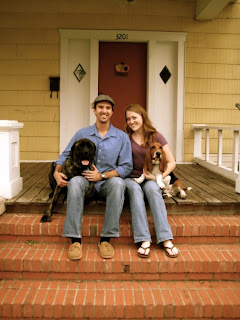 Thanks to all who offered to search for shoes for me, I think I have three pairs found ... that is awesome because I go through one pair every three months. (Once they are not good for running I can wash them and give them to someone to get much more use out of them.) Again, I thank you so much for your help!

We did an 18 miler yesterday. This morning I was walking like an 80 year old granny. New shoes are going to help ... mine are not doing much for me anymore. The path we go on for long runs is not the path we filmed for the runner-cam video. This path is very congested for one mile but the other miles have less people on foot. The only thing that stands out about yesterday's run is that I saw a guy on a bike get hit by a tap-tap. It popped him off the bike and onto the hood. He seemed okay (his bike was not okay) - but I was tired enough that seeing it caused a few involuntary tears. I think physical exhaustion must make me partially crazy or something. When I got home I sat down at the table where Lydia, Annie and Phoebe were eating and burst into tears again. Not really sure why though. I have never seen those three babies (they may always be called that - even though they are not really that anymore) sit so still and so quietly all at once. I totally freaked them out. I plan to pull that trick out in the future when I need them to pipe-down.

I finally got tired of knowing only 30 phrases and I am working much more at forcing myself to speak Creole and not ask Troy or Paige for help when I get stuck, but keep working at it until I get it right ... Jeronne is complimentary and says I am doing well. Paige told me she hears a difference and that it is working. (Taking a class finally too.) Little tiny bits of acknowledged improvement is all it takes to motivate this lard.

The lost box of important stuff showed up at Britt's house Monday and will finally get to Haiti on Thursday... then the Christmas tradition and production can officially begin. Joseph may look like someone kicked his butt in this year's production - he took a hard fall today and bloodied his nose ... we expect he'll wake up with some bruising tomorrow. The roughed-up looking Joseph may tell a different story about the travel from Nazareth to Bethlehem ... like when the Shepherds jumped him??? ... stay tuned ...
at Saturday, December 05, 2009