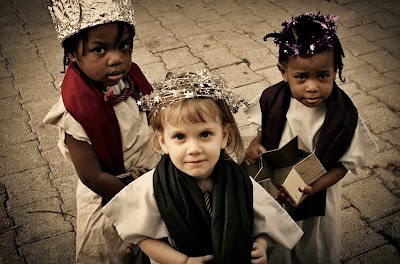 Our annual Christmas video is finished.

As usual, Troy shook his head and rolled his eyes at all the ideas I tossed out - right up until film day, then he was an over-the-top perfectionist worrying about stuff I'd long since given up on and forgotten. (Hope was supposed to fly through the air, but we never figured out how to do that without great risk of injury.) The delivery of six animals from the village was most certainly the highlight for the kids. Our next-door neighbors watched closely and speculated on what sort of freaks would dress their kids up in odd costumes and ride animals around the backyard. Considering the variables, the animal thing went well. Phoebe got head butted by a ticked off mother-sheep, but if we're telling the truth, she sort of had it coming. ;)

Isaac, Hope and Noah are the perfect ages to be very into the whole idea and excited about pretending to be back in time in Bethlehem. Paige is a good sport, at fifteen she could easily tell me to take a hike, but instead she showed up ready to give it some stick. Thank you Paige!

The littlest three girls kept things interesting by refusing to move where we wanted them to move unless there was a reward - ahem ... bribe, on the other end. We used to be the kind of parents that tried to avoid bribing our children ... saying things like "You will listen to me because I am your Dad/Mom." "Used to" being the key words there.

Once the numbers got so skewed and we switched to running a zone defense 24/7 - let's be real - bribing a child is not a question of bad or good parenting, it is a matter of survival. If you had eavesdropped in recent weeks, you may have overheard this- "You will listen because I am going to give you a little cup of Coca Cola if you do."

This is: Parenting Many Small Children 101. Welcome. Check your big ideas at the door. 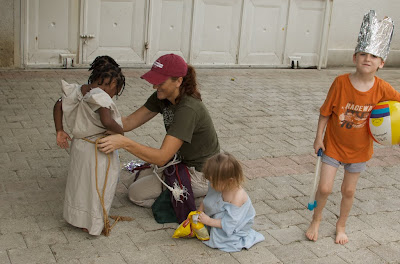 Troy might have lost a little of his joy during the production phase when we realized that all of the work we did with the three not-so-wise-men was lost. The camera dumped the footage and it could not be found again. We put them back into their costumes and gave it another try. He may have also seemed a little on edge while trying to lift a donkey back into a tall truck. I'd love to show you that footage but PETA would be on our doorstep in a flash.

(No donkeys were harmed in the filming of this video.)

We hope you enjoy it ... but more than that we hope you'll experience a little bit of the same amazing joy and great anticipation that the angels and the shepherds felt so long ago. 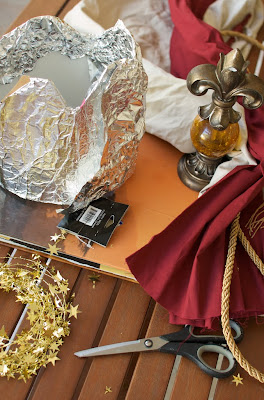 Be sure to watch Licia's blog (links on left) for Medika Mamba graduates. We've been lards about getting the before and after photos posted ... until we get our act together and get on it, Licia has been on the ball and posting them periodically.

Lately I have had a major hitch in my giddy-up ... I did a number on my left calf during a run and am not able to run at all (unless I want to just have screaming pain the entire time). For now, I am switching to running in water, which is totally unsatisfying, in hopes that I can heal in time to pull off 26.2 in about 25 days. Ugh. I am very bummed and really want it to heal fast. I tried the "run through the pain" approach - not recommended.

Barring some major exciting event that *must* be shared, we are going blog-silent for awhile.

We'll be celebrating little Miss Hopie's (the featured singer in the video) 8th Birthday on Christmas Eve. (click on her name to read about her dramatic arrival 8 years ago) We'll be enjoying some time off of school. We'll be counting days till big sister and big brother get to Haiti. We'll be trying to survive seven days without Jeronne's help. We'll be hosting one more team. We'll be having a giant Christmas party for the ladies in the Heartline Women's Program. We'll be waiting on deliveries of babies due yet this month. Once Christmas arrives, we'll be trying to spend a few days just "being present" with our children. We'll enjoy a meal with our Haiti-family on the 25th at the McHouls. Mostly, we'll be preparing our hearts and minds to rest in the peace that the gift of Jesus' birth and sacrifice provides us. He came as a baby to be our Savior, to redeem us ... and for that we are very thankful.

Merry Christmas to all - with gratitude for your kindness toward us.
thelivesaytribe