a typical day 3 weeks after an earthquake

This morning Troy got to tag along and observe as Jen and Greg as they did some Providence Ministries work. He said that it was one of the most emotionally difficult things he has been a witness to since the earthquake. The stories people are sharing are totally unimaginable.

Here are a few stories from the rest of our day ... in no particular order.

This is a little 8 year old girl named Berlancia. She broke a bone in her ankle when her house fell. We had originally hoped she could have surgery but the hospital we took her to decided to cast it. Today she went back for new x-rays and continues to heal. Her Mom told us she was not feeling well so we decided to do a pregnancy test. She learned that she is pregnant today and was pretty overwhelmed. She said she has lost four babies in her life and that she has four living children. Please pray that Heartline's Prenatal Program (a pre-earthquake program) is able to help ease the burden of this unplanned pregnancy by supporting and encouraging at a stressful time of life. Pray that Berlancia's ankle heals well enough for her to walk normally. 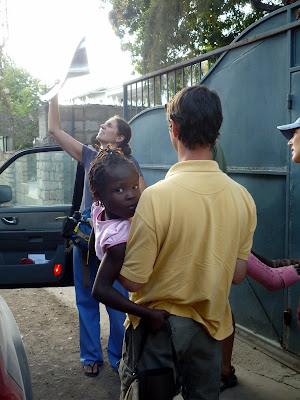 Our beautiful son Isaac has a beautiful birth- Mom. She came today (at our request). Today we were able to let her know that we'd be leaving for a little bit and that Isaac is doing well in the USA. We've been in touch with them a few times a year for the last four years and we did not want to just disappear without letting them know. They lost their house and thanks to so many of you that have given we were able to pass some of the money to them to help them in the coming month. We gave her a tarp and it might as well have been a million dollars, she was THRILLED to have a tarp. How humbling is that? We also learned that we misunderstood her yesterday when we talked on the phone. It was her sister's ten year old daughter that died in the earthquake. Not her daughter. Learning this was not less tragic, just a tiny bit less personal. Pray for the Antoine Family as they try to figure out how to rebuild their lives. 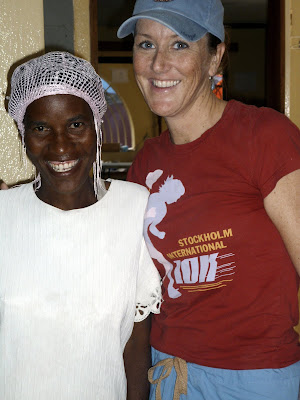 (Above, Isaac's two Mamas) Tomorrow we hope to connect with Hope and Phoebe's Mom too.
Troy's continued soft spot for preggo ladies ended up meaning another beautiful new baby/God story for all of us. Baby Duvancia was a huge gift to a weary team today ... Dad and Mom were an amazing example to all of us as they gave thanks to God for their healthy baby girl ... even though they have no home to bring her to tomorrow. Again, a portion of your gifts will be passed to this family. Thank you! The first photo is during labor. The second is the proud papa who kept saying, "God gives grace, God gives grace." The third is of Dr. Peter checking baby out - she is 100% perfect. 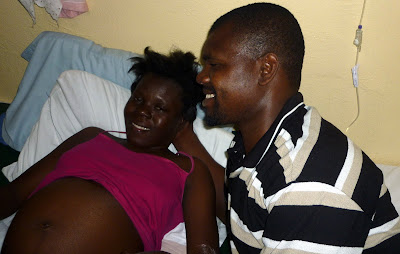 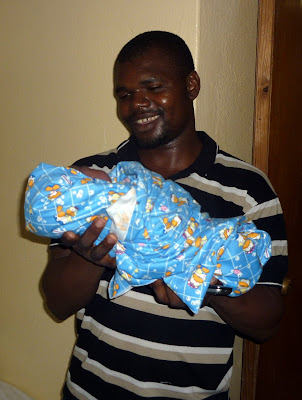 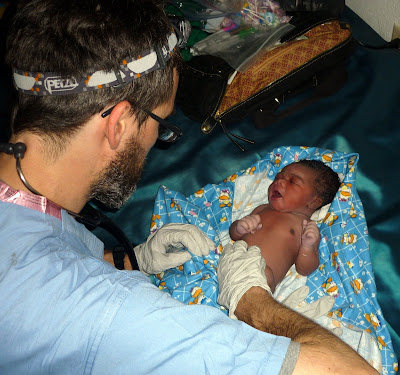 This little guy is at the hospital with the Heartline team. His name is Rosemon. He lost his parents and siblings in the earthquake. He waited three days to be removed from the rubble (estimated). He has a fractured skull, a broken right arm, and a broken left leg. He will be going to live with his Grandma once he is discharged. Pray for healing in Rosemon's body and heart. 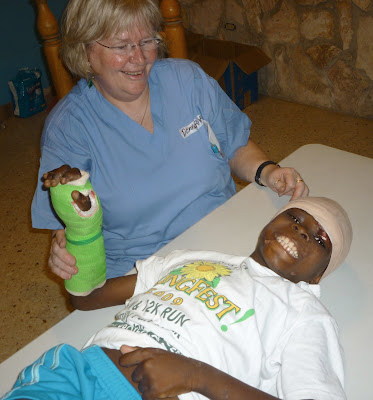 Jean worked with Brian today. Brian is a Physical Therapist and is helping Jean learn how to work with his crutches. Someday we really hope Jean can get a prosthetic leg from our friends at Healing Hands for Haiti ... but until that time he will need to get really good on his crutches. Tomorrow he will be discharged. He will be back in a week for Dr. Jen and the other Docs to check his progress. Pray for Jean and Gran as they return to a tent city to meet up with Jean's Mom and siblings. Pray that they are patient with him as he learns how to live with one foot. 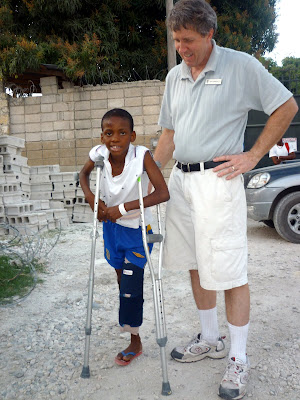 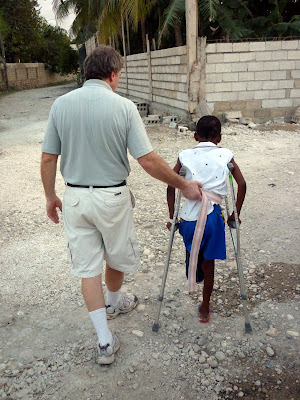 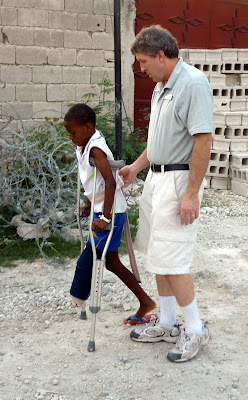 Tomorrow *might* be the day that Kensley (6 year old boy) gets his skin graft. The Docs we talked with from the UK say they *think* they can do it. Pray for favor for Kensley. (No photos of Kensley).
Madelene is a lady in the Heartline Hospital. She needs a skin graft too. Her leg wound is horrible. She has three children and needs and wants to get back to them but currently she needs to be hospitalized. If Kensley gets his skin graft, Madelene is the next patient we'll try to get into that field hospital. 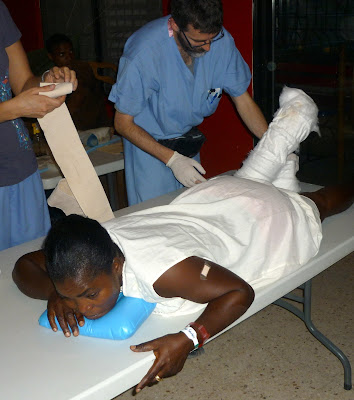 Before I close, I thought I'd share an entertaining story about the strange way the world works ... getting around Haiti has always required that you sort of fake it till you make it. Basically, if you pretend you are large and in charge --- then - in fact - you are large and in charge. We've always chuckled at the silly posturing that goes on but we also realized it was a system that we would have to join if we wanted to get stuff done. When Troy went to the D.R. a couple weeks ago to get supplies with fellow missionary Scott Salvant they crossed the border with a business card from some governor somewhere and some sweet civil defense t-shirts. They flew through the border like nobody's business. The very next day a friend of ours from the Salvation Army was able to hook Troy-boy up with a Salvation Army t-shirt and that allowed for some extra privileges with the big NGO's and their supply warehouses. :) 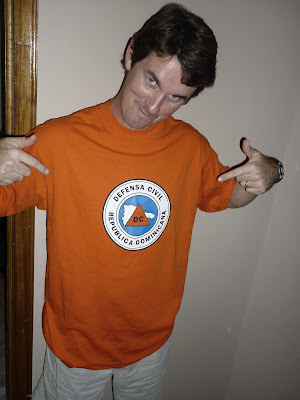 The other day I was able to talk to Kevin Allen of Endurance Planet by phone, this is the recorded interview. Since it was about running too I was motivated to talk. :) I think the portion of my interview is about 15 minutes into the show.

A couple days from now I'll be running in Texas ... And missing this place and these people like nobody's business.

Thank you all for your continued interest in Haiti and her resilient people - your refusal to get bored with the story or quit caring and turn away has meant a lot to SO MANY of us. May God give us all ears to hear the cries, eyes to see need, and hearts like His. Amen.
at Tuesday, February 02, 2010