Most people tend to be introspective at this time of year.  As we wrap up 2010 and look forward to the year ahead we find ourselves trying to figure out what we learned.  We think we learned something, we're just not certain how well.  We think we learned about patience and grace and God's faithfulness. We think we learned about trusting Him in times of pain and uncertainty. We seem to have learned that Jesus is enough.  (But we're not terribly intelligent so we'll probably forget all of this.)
2010 began with Britt and Chris arriving in Haiti to visit us for the first time as a married couple. We spent six days enjoying them and showing them what life is like in Port au Prince.  After they left Paige and I headed to Florida to run the Disney Marathon with friends and ministry partners.  I returned to Haiti on January 11th; Paige returned after me at noon on the 12th.  As you know, things took an unexpected turn late on the afternoon of the 12th of January.
The rest of the month of January is forever a vivid, colorful, heart-pounding memory. 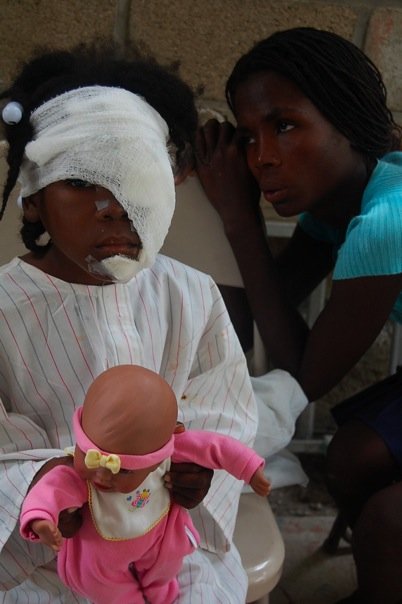 Most of what was written in January and February was unedited and without a lot of worrying about offending someone. It was written from places of fatigue and grief. It was off the cuff and honest, and sometimes pretty dark.
Seeing hundreds of thousands of people dying, hurting, grieving, lost, confused, and afraid in the horrible aftermath will always be difficult to reflect upon and remember.
We can only imagine what those that waited on loved ones trapped in rubble must wrestle with and reconcile.  We can only imagine the depth of grief of those that lost a close loved one.
Links to those messy weeks - Missionary, Wrestling, Counseling & Geology
Ups and downs of grief  and reuniting with our kids
In the months that followed we watched God weave His love and truth into our pain. We felt His healing hands at work as we examined our anger and hurts. We experienced His provision when hard things happened. We saw Him in unique ways as we drove long hours across the mid-west. He is the giver of hope. There was nothing simple about the 2010 but looking back His fingerprints are everywhere. Even in the last four weeks as Troy has been working through the grief of his brother's death  -  God had been faithful and steady and trustworthy. He has shown Himself to be enough.
As we leave this ordered country/state/city and return to the chaos of Port au Prince we continue to learn that He is enough. We have hope for healing - for Haiti and in our own messy lives.
We are believing our Father will mend this.