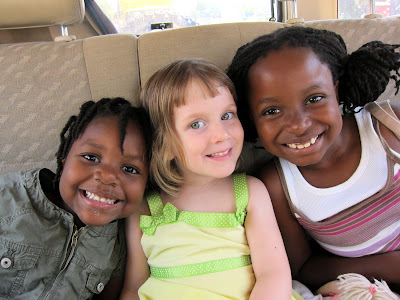 Being a mom to this tribe is still my favorite job.  We laugh often every day with so many fabulous and interesting questions and comments being directed our way.
I vowed to try to do three to four specifically kid focused posts per year. It is time again. I said in a previous post:
"I am not that Mom that scrapbooks, fills in baby-books, keeps artwork tucked away for years, or writes beautiful letters to my children. In my mind I am that mom, but in reality I am a total slacker. It is not that I don't find these children and their changing lives and personalities 100% entertaining and exciting ... that is not it at all. I simply lack the attention to detail and time it takes for long-term documentation projects.  (Baby books) I could never be a statistician."
(This is really for me and the grandparents - anyone else choosing to read has been served notice. This could be a real snore for you.)
In an effort to keep this information in one place ...
Official Entry One
Entry Two
Entry Three
Livesay Kids Baby Book Entry Four - Being written four months after returning to PAP post earthquake after their year in America.  In no particular order ... 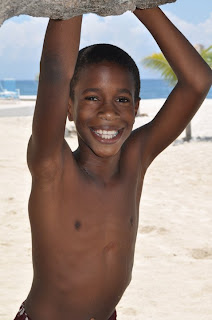 Isaac - (9.5 now) I really worried he would not be okay back in Port au Prince. He digs America a lot. Thankfully the worries were wasted. He is doing great. He has new good friends in the Hendrick boys and loves spending time with them. Not to say he is not still dreaming of Sonic and playgrounds and amusement parks, but in spite of those things he is content here. He has the type of personality that makes it hard even for mean kids to dislike him ... he's almost so nice and innocent that he becomes unaware of how sinister much of the world around him is. It is one reason I really want him in a more innocent and friendly environment than any school system anywhere can ever provide. Kids his age know a lot of stuff. They are happy to teach him.  It would kill me to see his innocence taken from him too soon. His life is mainly unicorns and rainbows and we like it that way.  There is plenty of time for him to figure out the gross and depressing things of the world. For now we all thoroughly enjoy his curious mind and never ending questions and especially his ability to see the good in everything. He genuinely cares about encouraging others.  Last night he asked me how in the world I made the noodles so delicious? Did I have a secret?  He wasn't even being an Eddie Haskell  -  that is just who he is.  (and yes, I am totally awesome at boiling water and dumping noodles in) 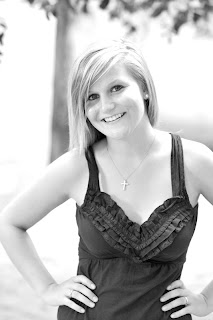 Paige - (16.4 now)
We are amazed again this year at how Paige rolls with the punches and even seems to lead the rest of us with her ability to shrug and move on when things get hard. Since we got back to Haiti she had a major allergic reaction and then a battle with MRSA that caused a lot of trouble but she finally beat all of that. She will finish 10th grade at QCS in late May. She has her travel plans all set for the summer and will be enjoying time with family and friends in Texas and Minnesota. Probably most exciting to her is the visit to Haiti that is planned in early July of her best friend, Julia. We are all very excited for her to get to show someone so close to her this life. It is hard to be 16 anyway, but feeling like nobody cares to understand your life can be hard.  Julia gave Paige a beautiful gift when she announced she wanted to come this summer. Right now we're enjoying Paige's joy and friendship and growth. She is a treasure. 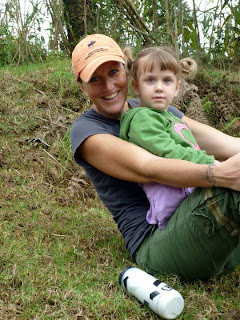 Lydia - (3.5 now) Lydia prefers sugar above any other single substance on earth. She would live on suckers and chocolate if it were allowed. When it comes to "real food" she will choose rice and beans over anything else ever time. She is having less crazy bad days lately and only occasionally goes bananas on us. When she goes all nutty-bananas we stand back in awe of such impressive rage. Really. It is quite something. She still demands more time and attention than any other child and we work hard to give her what she wants and minimize her melt-downs. Thankfully she is 100% at ease here in Haiti. We have our textbook third-culture-kid in the making in Lydia. She danced to Kompa music at a neighbors party and didn't discriminate against strangers as she danced around table to table entertaining everyone. She grabs a flashlight, cannot get it to turn on and asks, "We don't have EDH right now?" She squashes bugs with her bare hands. :) Because she is always around new moms, at church on Sunday she lifted her dress to nurse her baby doll during the service. She is observing and misses nothing. 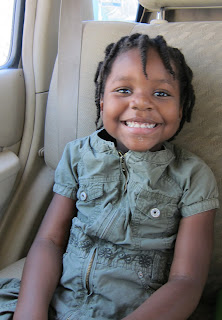 Phoebe - (4.5 now) Phoebe has done really well with the transition back to Haiti too. We worried about her and Isaac the most. Every ounce of Phoebe is introverted. We know this about her and allow her more time at home and away from unknown social situations. She enjoys going to the Harbor House or the Maternity House because they are familiar to her.  She likes the guest house when it is just the Heartline staff.  If we take her somewhere new she instantly responds by burying her face in our legs and wishing the new people away. If a stranger asks her what her name is she shuts them down with the blank stare. She plays for hours with her dolls and never gets bored with time to play alone. Her voice is still Elmo-like and we love listening to her chat with Lydia or her dolls. One bump we've not yet figured out is her fear of water. She will not have anything to do with swimming pools or seas. Having her hair washed upsets her a lot. She gets very panicky even if we are holding her in our arms in the water. Emotionally she seems younger than four and a half. For that reason we won't start her in Kindergarten this fall. 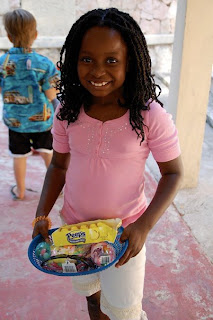 Hope (9.3 now) -
Another sugar lover ...  only this sugar lover is always so sweet herself.  Hope loves to write letters and sweet notes. Almost every day I get some drawing with a kind word on it.  Tonight I got a heart drawing that said "Best mom and cool mom in the world". We know she has tons of athletic ability but lately she is most interested in hours and hours of Little House in the Prairie DVD's.  Sometimes we have to force the DVD player off and tell her to get out and move her bod.  We wish there was some way to get her involved in track and field ... she has an amazing untapped sprinter trapped inside that compact little body.  She grew the least of all the kids in Texas but has grown a lot since we got home and I just bought new clothes because everything that fit in January is now getting small.  Hope has loved school at QCS but is very excited for summer and is more of a homebody like Phoebe.  It is hard to believe we met her 9 years ago last month.  She loves to swim with her brothers but also enjoys just hanging out with Paige pretending to be older and hipper like Paige.
Noah (7 now) - 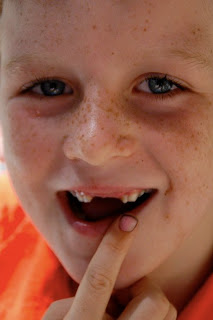 We're not sure if Noah has more teeth missing or in his mouth. There is currently a three tooth gap across the front. This photo was taken right before he lost the one on the right. He eats like a horse in spite of his lack of choppers. His speech problem corrected itself over the last three months. We actually hadn't noticed until we posted his video on Good Friday. He says his L and R sounds perfectly now.  He still comes to climb in the middle of our bed at least three nights a week.  We have a love-hate relationship with that habit of his. It is so sweet and cute that he wants to cuddle us.  But it is so stinking hot and humid and that makes it less sweet and cute. Swimming is his favorite activity. Rough-housing or wrestling is his second favorite activity.  Troy did not grow up wrestling and being rowdy -  I did. My sister and Dad and I gave each other "the typewriter" regularly.  I am the main wrestler and I am the one slamming him on the bed to tickle him to death while he begs for more and gets mad when I am tired of it. I'm really excited to not have him gone so many hours every week. He is a great conversationalist and I miss the time talking with him.
Britt & Chris (too grown up to worry about age now) - 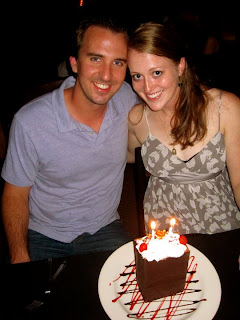 The adorable Bernards are enjoying being homeowners and college graduates in Waco, TX. Chris got promoted at the YMCA and is very well loved there. He works hard and continues as a youth pastor part time as well as the full time YMCA management job.  Britt was accepted into at Master's program at Baylor's School of Public Health and will begin grad school this fall.  She will be going for almost no tuition cost thanks to an "assistantship" position she earned where she will teach a few hours a week.
We are most excited that she arrived yesterday to spend seven nights with us in Haiti.  We are planning a few fun weekend activities.  The last time she was here was one week before the earthquake.  Chris cannot get time off of work but we are hoping that Christmas with them somewhere on this island might be an option.  It has become clear that it won't stop being/feeling weird having a grown up adult kid.  How did this even happen?  Our friends are now teasing us about becoming grandparents so it was probably good timing to let go of thinking it will ever feel "normal".   (And no - this is not an announcement of any sort. thankyouverymuch.)
For the next six glorious days I have all seven of my precious babies in one country.  I am so SO excited to be together.  These investments matter more to me than I can express.  They are precious, precious gifts that I do not deserve. I wish I could protect them and guarantee no hurt or hardship for them ... but since I cannot  ... I guarantee them my unending love and unceasing prayers .
Baby Book Entry 5 is penciled in for August.
at Thursday, May 05, 2011