For those keeping track of Haiti and the news here - you already know that there were some problems around Port au Prince today. Our family and all of the Heartline family are safe and sound.

The condensed and incomplete version is this: some police officers have been killed under questionable circumstances over the last couple of weeks and had planned a strike that was 'officially' to begin tomorrow... the strike was rumored to only include traffic police. As far as we know roadblocks and barricades were erected in many areas around town by community members showing 'solidarity' with the police.

Last night rumors began circulating and escalating as they always do here, and by this morning the streets were fairly empty on our side of the city.

One of the largest and active barricades (from what I hear) around town was the one erected a few yards from the Heartline property where the children go to school, some staff are housed, and the bakery is being built - the building being erected today of all days. 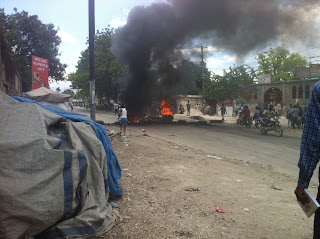 view from the front gate of the OK Corral this afternoon

The construction crew for the new bakery and all of the building materials fortunately arrived ahead of the barricades. We were not so fortunate on our trip to school.

After passing many vehicles and pedestrians hurriedly headed in the opposite direction, I rounded the corner at the last major intersection and paused upon seeing a large box truck blocking the road. The driver was being forced by some agressive men to park the truck sideways, meanwhile the back end of the truck had a flood of people and goods flowing out of it as all tried to get out of harm's way. I glanced around and saw the street vendors that were still around packing up and rushing off of the sidewalks and street. After speaking to a few people and hearing of the tires on fire beyond the parked truck, the rocks being thrown at passing vehicles, and the rumors of gunfire I decided to turn around and head the other direction with the rest of the traffic.

We spoke to everyone already safely inside the walls at the property, and professor/teacher/Mr. Jimmy put it best when he said: 'Maybe we should call off school due to civil unrest today." I was relieved as I think I could have talked my way through the blockade myself, but was a bit leery of trying to pass with the kids in tow and/or leaving the truck parked along the side of the road.

The kids were excited to have an extra day off until we got home and realized that their aforementioned teacher and I had already discussed what work needed to be accomplished. The cheers quickly turned to jeers as I printed off their work for the day.

Eventually rains late in the afternoon calmed things down around the city - all of the other Heartline peeps got where they were going sooner or later - there is much more news to be found elsewhere on the internet regarding the day's events, so I won't expound further here.

Tomorrow will prove to be another interesting day in Haiti - just like every. single. other one.

Pray for Haiti - for Port au Prince - for the police and government - not just because of the problems today, but because like every day, everywhere, for everyone - God is at work redeeming and restoring a very broken world and using you and I to make that happen...and our prayers are a powerful tool in seeing that through.