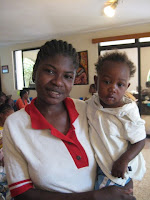 The last few weeks of Prenatal and Early Childhood Development class have proven to be eye-opening.

Each week there is a lesson. We often try to do role play and get the ladies involved in the lesson in some unique way.

Our topic last week was domestic violence. Beth read a story about a woman who suffered at the hands of an angry, controlling man. At the end of the story the room was very quiet. Beth asked the ladies if that happens in Haiti. The answer given by several of the ladies was, "chak jou" - or every day. 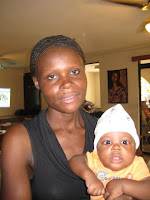 We went on to do the role play in which I played the man and beat up a lady and told her that she took too long at the market and that I did not want her gone so long ... that I deserved better.

After the skit Beth asked what sort of advice the ladies would offer the woman who had just been beat. They all said, "Get up and go to the market earlier so he won't be mad." We questioned them further and learned that they almost all believe that there are things they should try to do to keep from being beat. We asked them if they might consider leaving the abusive man. They all said, No - he has the money, they cannot leave. Sometimes they call the police, but the police don't have gas in their truck and don't necessarily respond. We asked them if they had a 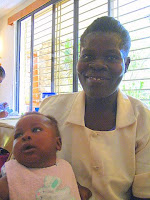 job, a way to make money, then would they leave? The entire room raised their hands indicating that if they had the economic ability to feed their kids, they would not put up with beatings.

To question these findings further, I had Troy ask Jeronne if her ex-boyfriend ever beat her. Without one second of hesitation she said, "Yes, he liked to hit." Troy asked her if she thought it was odd that he does not beat me, she laughed and said "oui!"

We try to avoid making generalizations. But the fact is, on a large scale, not much can be done for a family trapped in a cycle of poverty. Government won't respond. Culturally men hold 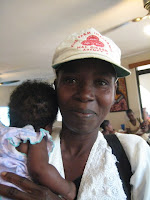 the power over women and violence is ignored. Women have no power to leave. Children are at the mercy of these realities. Women accept abuse as a normal part of their existence in order to keep their children in homes and fed, even at very minimal levels.

The prayer, the hope, the desire of a program like Heartline Women's Program is to begin to empower a woman. We meet many of them during their pregnancy when they enter our program to receive basic prenatal care, vitamins, and education. Our belief is that if a woman learns to take care of her child better, learns to read, learns to share what she knows with her friends ... she has power - she begins to believe in herself. If she has that power she might 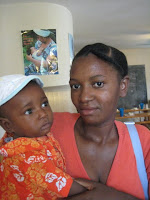 Once, a couple of years ago, a man came to Troy and asked him to fire his girlfriend. Troy said, "Why would I do that? She is a great employee." The man went on to say that she no longer respected him because she had her own money. Translation: She no longer put up with being beat. Troy refused and rumors circulated that the man was going to kill her. Eventually his anger faded and she went on with her life without him. But this is no isolated story. This is the reality of many poor women in Haiti.
at Sunday, December 07, 2008