-Donation facts-
(Troy says this officially qualifies me as OCD. I say these are interesting stats and he should zip-it.)

That is at least 371 kids who can be treated with Medika Mamba in the coming year. I will update the totals again in one month, the day before we leave for Minnesota. THANK YOU for continuing to spread the word and support the kids of Haiti. I'd love to see 400 kids treated.

Run Report-
We pulled off 18 Port au Prince miles this morning (Beth and I). I only questioned my ability a time or two in the 8-9 mile range and again at about mile 12 which is an all up-hill mile. My adorable water boy showed up shortly after that. We changed clothes once, ate at mile 6 and 9 and 13, and stopped to hug and cry one time at mile 13.75 or so.

We don't run right together much of the time. I was out in front of Beth by a minute or so. I was on a stretch of the road where there is no shoulder and you're forced onto the road. At this place the road also curves. There are not many people/vendors/houses in that area and vehicles tend to get go about 30-40 mph. I had my back to oncoming traffic. I had David Crowder Band in my ears. I wear a visor that sort of cuts down on my peripheral vision. It was sort of a perfect storm moment. I was running along and all of a sudden I feel something brushing against my left shoulder. It bumped me away from it so that I almost went off the road into the ditch area. This is what brushed my left shoulder and this is why I stopped right where I was and burst into tears. It scared the crud out of me. It also instantly hit me how totally lucky I was to be standing there in one piece. 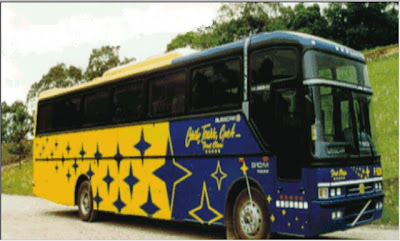 I waited for Beth to catch up. She noticed I was freaking out and asked what happened? I told her. She got covered in goosebumps and burst into tears too. Just a minute or two before the bus passed me, it passed Beth. She saw it and was prompted to say a little prayer and said, "Lord protect Tara as she runs."