{This is the story of returning Renald to his family after acting as a "foster" family and nursing him back to health in 2009.} 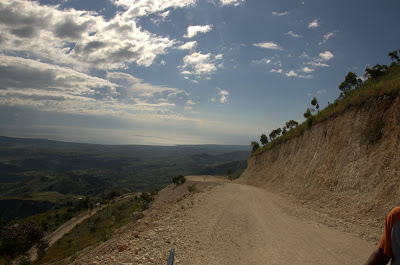 In the last few months there has been a major road project going through the center of the country. Because of this new road we did not have to walk six hours to get to Renald's house. We were able to drive about 70 minutes and then walk the last two miles into the area where his home is. The road is really an amazing thing, a huge, huge undertaking. Seeing the giant earth moving equipment right along side people who've lived a very simple life for decades and decades seemed quite odd. In the photo below you can see the road winding behind us. Before the hurricanes came through last fall this road did not exist. All of the travel to the area we were heading was by foot or donkey. 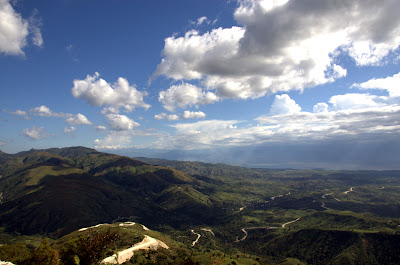 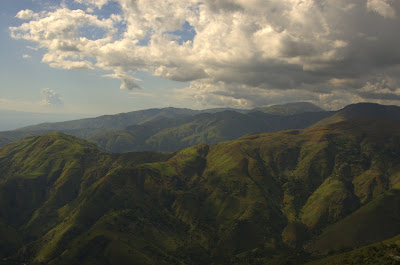 We've been in the mountains of Haiti before, but it has been a long time. I think we forgot. The views were breathtaking. More than once there were tears streaming down our faces as we took in such vast and overwhelming beauty. Photos of what we were seeing will never do it justice, the clouds were sometimes below us and the mountains went on for as far as the eye could see. For the entire ride I just kept thinking, this is too beautiful to be real. 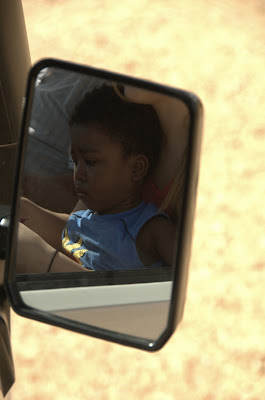 Renald seemed nervous and off his game a bit. He is fairly verbal but he was not talking on the ride up. The two photos below are right before we started the walking portion of our trip. We walked straight down steep mountains and back up again to reach his home which is located a long way off of the new road. In the second photo Paige is looking toward his house, where our walk would take us. 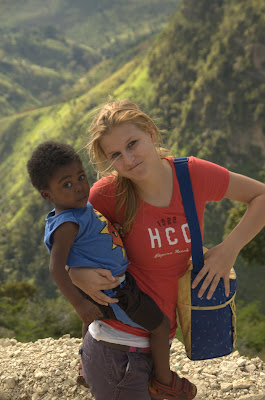 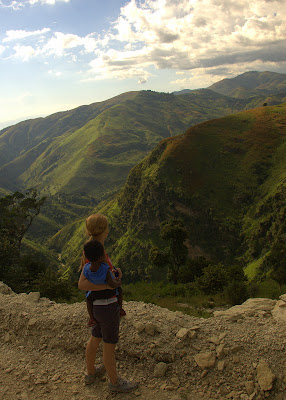 About 1/3 of the way into our half hour trek we ran into a guy who said he was "with the mother of the child". Renald showed no recognition but went to him when the man reached for him. My heart sunk learning that there was a guy in the picture. So often the new guy does not want the previous guy's kids. That story has been told over and over again in Haiti. 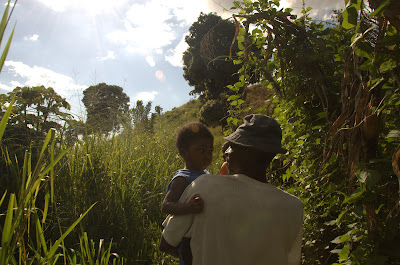 As we got closer to the area where their house is located Renald asked for Paige and switched to her arms. He seemed to know where he was. He also seemed concerned (that is how we read it anyway) and maybe a little bit nervous. 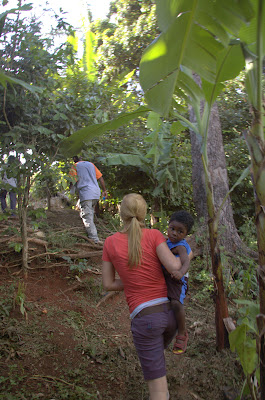 While the next 15 minutes were not what I prayed or hoped for, I am trying to be objective. I am not Haitian and I do not express emotion like a Haitian. It is unfair for me to expect them to jump up and down and hug their child and cry for joy and do what I think I would do ... that might not be a response that happens in this culture. 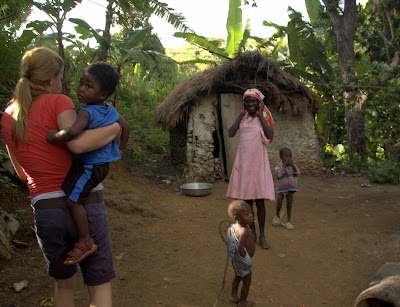 Renald was not very happy, while he seemed to remember them he tightened his grip on Paige. His Mom smiled at him as we walked up but when he did not want to go to her she was put off and seemed hurt and upset with him. 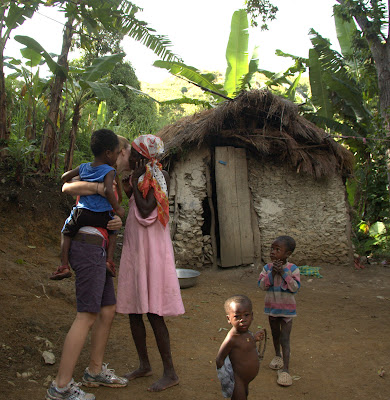 The boyfriend is not Renald's father and was telling Troy and Frank (a long-time employee from RHFH/Cazale that escorted us) that he was really kind of thinking we would just keep Renald. The boyfriend was the low point in the whole situation. The Mom never said anything like that.

In situations like theirs it is possible that a healthy kid that is used to eating three meals a day might be an overwhelming thing for them. Not only another mouth to feed, but a child who won't be happy with one tiny meal a day.

Renald cried softly for most of the time we stood trying to talk to them. A crowd of relatives gathered. 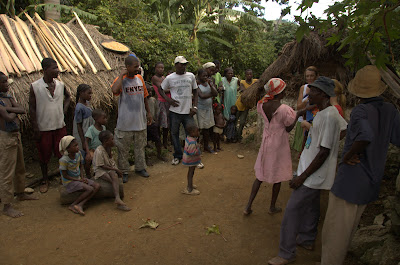 The brightest moment was when Renald's Granny realized he was back. She was genuinely happy and pleased to see him healthy. He did better going to Gran than he did going to his Mom. 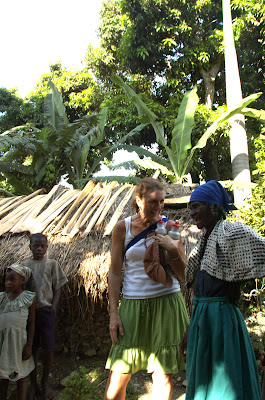 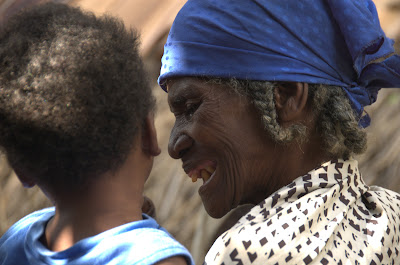 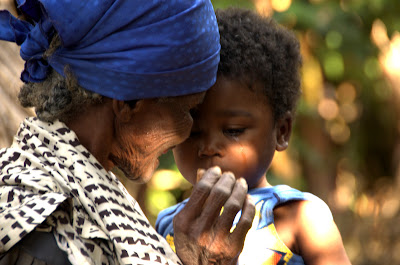 Troy asked a lot of questions about the other kids and how old they were. It was sad when the Mom could not remember the name of the 18 month old baby. She came up with it about 30 seconds later. I don't know if survival mode makes names unimportant or if possibly prolonged malnutrition or other factors play into things. It did seem like the Mom was struggling to take in the information and answer questions. She may have been totally overwhelmed by all the attention. I have no way of understanding her life... Simply no way at all.

Beth asked me if I thought it was universal to love your child and if possibly the privilege of wealth allows us greater freedom to love. I don't know the answer. Maybe so.

Below are two older siblings of Renald and also his little brother, who is the child of the boyfriend we met. They are standing in front of the house they all live in. None of them look all that healthy, but none of them look as sick or as malnourished as Renald did back in June. The sister is 8 and the older brother is 6. 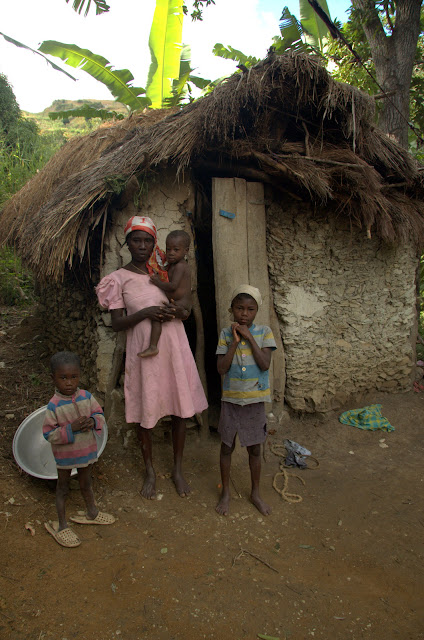 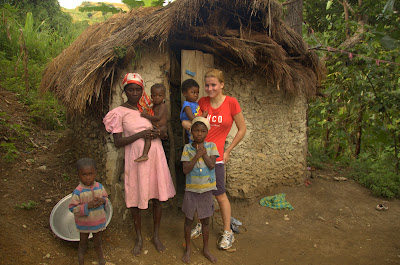 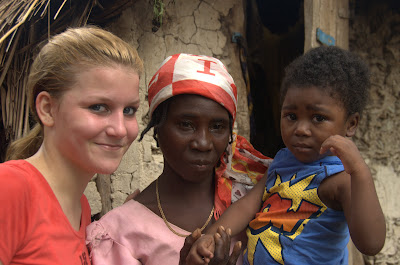 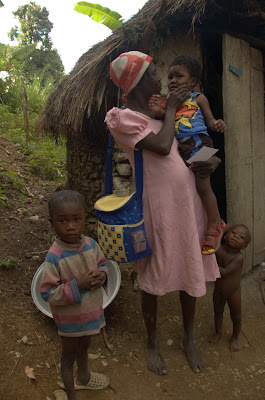 While everything in us (Paige and I) wanted to just take him and run, we know we needed to give them their son, brother, grandson back. He is not ours to take from them. I think we want to believe that we love him more -- but there is no way we can know that. That is our egotistical (ethnocentric) judgment.

The reactions were not what we wanted but we cannot know their hearts. Renald needs time to bond to them and we were dumb to think he would be instantly happy to be home. Because I can provide a nicer house, toys and food -- it does not mean that I am a better person to raise him. I value those things, you value those things ... but plenty of people live their lives without those things and they live long, happy lives.

I waited a day to write because I was angry and upset and I know I needed to step back and calm down. I instantly decided that they don't love him as much as we do ... and that was wrong of me. I do not know that.

The truth is, all of us (some of you included) fell hard for this beautiful little boy. We tried hard not to entertain the idea of begging the family to let us adopt him. Trust me, we thought about it a lot. Renald needed healing and God gave him that. He gets to start over without worms and fevers and illness. He touched our lives with his fight to live and his beautiful smiling eyes and crazy fun dance moves.

I have to believe that Renald is not done touching lives. Not by any stretch of the imagination. To think that this little boy from a tiny shack in the remote mountains of Haiti has been seen, prayed for, and loved by hundreds and hundreds of people from all over the world is mind-numbing.

I hope you'll continue to love and pray for him.

We prayed with his Mom, hugged him goodbye, and left with heavy grief and blurry-eyes. 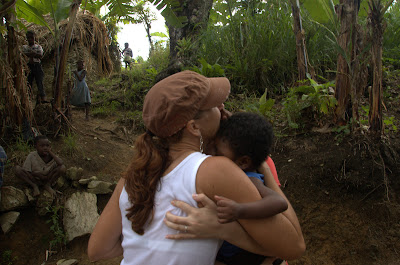 There are plans in place to help them with food, etc. We are not leaving them hanging. It is a tricky thing because we want to do our best to make sure that the kids are going to benefit from the help. Explaining why that is tricky is a whole different blog post. Renald's Mom will hopefully keep her appointment with Licia and Lori in Cazale in late November. At that time we'll be able to see how Renald is doing. For now we know we need to give this family a chance. We need to reserve our judgment and trust the same God we trusted for Renald's healing.

The peace we were longing for has yet to settle in on us, but we wait in hopeful expectation.

These last photos were taken after we hiked back out. They overlook the absolute beauty of the Artibonite Valley. 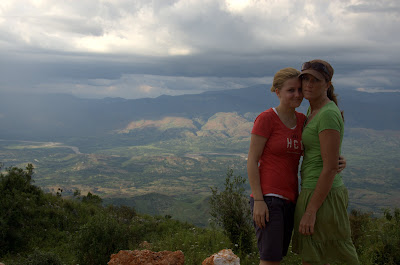 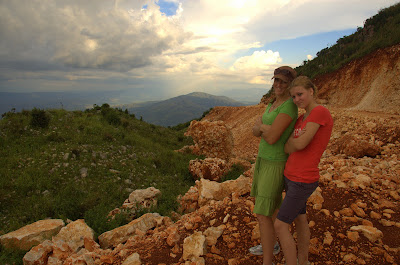 A GIANT amount of love and respect goes out to Licia and Lori and Big Zach. They do the hard work of helping children heal and then watching them leave ... only they do it all the time.
Until later,