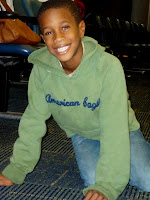 In the fall of 2001 we made a decision to adopt internationally. We had our own personal reasons for choosing to leave the USA to build our family.

We followed our hearts and felt strongly that our hearts were aligned with His and moved forward without too much consideration about being a white family raising black kids.

To our discredit we did not fully research or understand the challenges of transracial adoption. Sometimes ignorance really is bliss. Thankfully, that bliss of ignorance can only last so long ... then you learn something.

I remember people questioning us about raising Hope and Isaac in a 99% white suburb, and not really agreeing with them that it might be difficult. (And now, many years later I simply think that there will be challenges either way- just different ones in different locations.)

Ike and Hope have been with us for almost 7 years. In that time we've encountered some hurtful things, some funny things, and some totally ignorant people, and some really encouraging people. We've have been hurt by harsh words but we've also had multiple positive conversations. We've learned a lot about what we didn't know when we first sought to adopt cross-culturally and transracially. We've grown more sensitive to the way we speak about adoption,

families, birth-parents, and certainly the language we use when we make observations about ourselves or other blended families. We've tried to offer grace to people who just don't get it.

Moving to Haiti has not removed the challenges for Hope and Isaac - it has simply created new ones. In MN they were the minority and stood out as such. In Haiti they are the majority and we (their parents) stand out, therefore they do too. It may be harder for them here. They don't escape being "different". Now they are "those kids that live with the blans" to our neighbors. In many ways moving here just made us all odd outsiders and it is no longer a unique thing that only Hope and Isaac experience.

Truth be told, I probably worry more about Isaac than the girls. It does not take an anthropologist to figure out that many folks have already made their decisions about young black men. No longer can Isaac escape prejudice by being "that cute little black boy" - he's getting to the age (and size) where he'll likely begin to notice less automatic acceptance from some people.

As parents, we place a ton of faith in the power of love - and we trust and look to God for direction when situations arise. We strive to make sure our children know beyond any doubt that there is one place in this world where they will always belong and are so special they cannot be replaced. That place is here in this family. We're not so ignorant to think that we can protect them from all hurt and painful things -- we just hope to provide cushioning and encouragement when the punches land. And while adoption is a positive thing to them right now, we're prepared that at times in their life they may not feel that way.

When we went to Minnesota we had an interesting experience at immigration in Miami. As the five of us (T and T, Paige, Isaac and Noah) stepped forward and handed the officer our passports, the officer said in a terse voice, "Who is he with?" Troy and I were standing behind the three kids but Troy's response was to turn and look over his shoulder behind us to see if someone else had stepped forward to the window with us.

Troy looked back to the officer confused and the officer said, "This guy here", pointing at Isaac. (The officer had five U.S. passports in his hand already.) Troy said, "He is our son, he is with us."

The officer said, "Where are his adoption papers?" Troy said, "He is a U.S. Citizen and you have his (previously used and not brand new) U.S. passport in that stack." The officer went on to question when we adopted him, etc. He did not bother to look at the passport to see Isaac has been in and out of the country plenty of times.

Troy answered the questions, Isaac stood listening and Paige and I were just shocked by how cruddy the agent was at human-interaction. As he finally started to scan our passports he looks at Isaac and says, "Who are these people?" while gesturing toward us. Isaac looked at the guy and then glanced at us with a questioning look and said, "my parents!" (like, what is this guy thinking? duh.)

After we walked away to go grab our luggage I said, "How are you Ike - are you okay honey? Are you feeling alright about things?" I was all prepared to do damage control and counseling.

Isaac said, "Yeah, I just wish I could stop sneezing so much!"

I am so grateful for our family and the way God put it together. I am thankful for opportunities to learn and grow. I am good with being different and as a family we celebrate the many things that make our family "weird" to others. Isaac and Hope are a gift to us and everyone who knows them. We thank the Lord for entrusting us with this awesome responsibility.

May we be equal to the task He has given us. 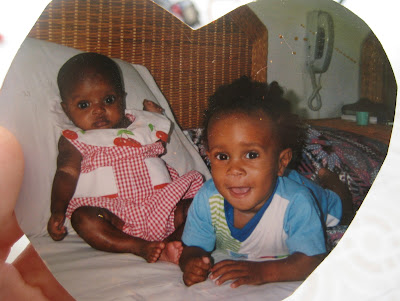