Many, many months ago I was trying to come up with creative ideas to jump-start the fundraising for the Women's Program. I was purposefully trying to think outside the box in order to come up with something new and different. I wondered if there was a new and creative idea we were missing. Running marathons is fun, but we needed a break from intense training. I woke up one morning with a fabulous idea. I went to John with it -  and he immediately rejected it. 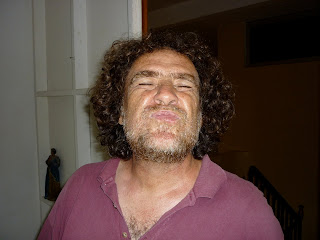 I said - "John - Finally! I have an idea that will sell. We should auction off an opportunity to decide on and execute your next haircut ... If you truly love Haiti, you will want to do this."

After I pitched the idea to him, I got this email in reply:

"Tara, I am praying for you. You are obviously mentally ill."

(I think there is some irony there somewhere. THAT guy calling ME mentally ill.)

The next day John verbally abused me at church, as he often does. He can do that, it is fine, I don't tire easily and I just kept making my case.

Yesterday, after NINE months of trying to convince him - he finally relented.  His hair is at least 8 inches longer than when I first thought we needed to get rid of it last year! He often brags about how seldom he cuts his locks - usually only twice a year. At this point, we are way beyond that benchmark and things have been too busy ever since the quake to address his burgeoning coiffure. It has become a game for him to taunt and tease the rest of us that have grown tired, disgusted, and a little bit afraid of that mop. The game is up.

He has agreed to allow us to earn the right to rid him of that atrocious head of "hay-uh" (Bostonian for hair).  We have 100 days to raise the required amount. He seems to think his hay-uh is safe with the amount he requires.  I think he is wrong. That hair is coming off.


In the last 21 years, scores of people have been tortured by John. And I do mean scores. Maybe they came to Haiti and got sick while staying with the McHouls and John laughed at them for having Haitian Happiness. Maybe he took them on long car rides on purpose to torture them. Maybe they made a dumb mistake and John never let it go and teased and teased and teased. Maybe they misunderstood the culture and said something kind of silly and John gave them a nickname that they could never escape. (Just ask "Melda Mace".) 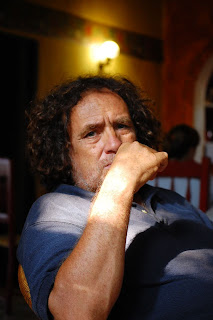 His vanity requires a pretty hefty donation if we ever hope to see the spectacle of a tet/head that lies beneath his hair.

He has agreed to allow his head to be shaved BALD - recorded on video to be posted on the internet- if we can raise 50K (USD) in 100 days.

Once we reach 50K the massive mop of hair will be shaved.  Tweet this, share it on FB, tell your friends, tell strangers ... help spread the word!  The cause is wonderful.  If you've been following the ministry of Heartline since the EQ, you know that in response to the catastrophe we opened a clinic that became a hospital.  We've been in prayer about what God would have us do in the future and we're moving forward to open a year-round, fully functional and staffed clinic/small hospital.  This 50K will be the beginning as we move forward to build a facility.

All funds are deposited directly from the chip-in meter to Heartline's account and are tax-deductible.

There are, without a doubt, a plethora of folks out there that have been dying to settle the score with one Mr. John McHoul.

Sorry John, these people are about to bring their A game. Kiss your Hay-uh goodbye.

(If you prefer not to donate on-line, please contact us for snail-mail donation information. Mailed donations will be updated periodically, but cannot be added to/reflected on the chip-in meter.)
at Wednesday, August 04, 2010